'When Bikini Models Are too Hot To Handle': The Future Of The ‘Fourth Estate’. 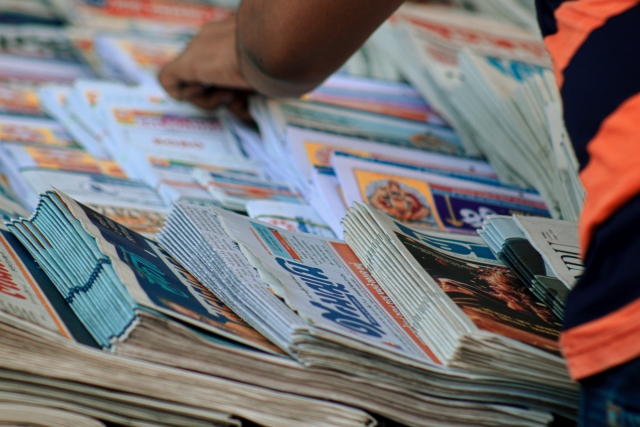 The two possibilities offered in the title are apparently unrelated and could be seen as yoked by the author rather mischievously. What on earth connects a question as serious as the future of journalism to something as trivial as bikini models?

The reality is that we are inhabiting a time when bikini models are not only organically connected to mainstream journalism; they have come to define and legitimate the latter.

If journalism of yore was characterized by the people’s right to know and the editor’s freedom to write, in today’s consumeristic world, that right has expanded itself to demand other varieties of gratification.

If one thought it is a transgression or even degradation that has converted journalism as a site of reason to the space of consumption and decadence, one has to open one’s eyes and ears to understand how journalism takes effect today.

Bikini bodies and hot models are no longer the preserve of showbiz magazines; they have become an inalienable part of democracy-making that goes by the name of journalism.

How do journalists matter?

Before I start defining journalism as a kind of Kingfisher calendar girl contest, let me digress a little.

In early 19th century, the great statesman Edmund Burke called the press gallery of the Parliament the Fourth Estate that complemented the other three estates such as Clergy, Nobility and Commons.

Though journalism as a social and political institution in the business of information dissemination can be traced to the ancient Greeks, its association with democracy and citizenship is a modern construct.

Needless to say, there are more newspapers and channels and more journalists than ever before, but it is equally true that they have become a noisy, impatient, angry community that revels in outrage. Caught between its self-declared quest for truth and the freedom to express, what news media gives us is indulgence-guaranteeing images and stories that can either agitate or titillate, or both. So much for the grand objectives of the Fourth Estate.

One does not have to be a media scholar to understand the descent of contemporary journalism from its lofty claims of citizenship-building to the reality of a competitive endeavour achieved through circulation numbers and internet hits.

Behind the public performance of journalism as the enabler of democracy, the lurking pragmatism of circulation, revenue and profit defines journalistic practice. This world is no stranger to expansion, acquisition, merger, hiring and firing, salary cut, predatory pricing etc. that compromise its democracy/citizenship mask.

News anchors must look either quirky or sonorously formal entering the studio in slow motion, programme hosts must beat their chest and spit venom the way characters in tele-serials do and opinion-makers in print media must keep reminding people that they are senior journalists/editors with decades of experience.

News world increasingly resembles the showbiz world, not just because our news producers behave like the people of the glamour world but also because perhaps, audacious though it may sound, now there is no essential difference between journalism and Bollywood.

It is not for nothing that Saif Ali Khan and Swara Bhaskar are the new political philosophers and Deepika Padukone could literally convert a university to a movie set.

Decades of feminist scholarship on cinema have tried to decode the inherent voyeurism and masculinist bias in the act of viewing. Well, such scholarship can be questioned for uncritically assuming that a viewer is always a male, something which does not reflect contemporary reality.

The renewed feminist and liberal investment on female body has made it a site of liberation and fulfillment. Outside of feminism, journalism always revelled in giving first access to its readers through its ‘exclusive’ coverage.

The drive to reach at the heart of things before anybody else reaches there is a journalistic creed and the responsibility of sharing with its readers before they switch over to another platform is a compelling need.

Today’s voyeurism is no longer metaphorical as in getting to know early, but literal when the readers/viewers are bombarded with images with the promise that it is only they who are getting to see this.

This trick is not confined to tabloids or television news channels that survive on visuals rather than cold reasoning and logical persuasion, but something that characterises mainstream newspapers such as Hindustan Times or Times of India.

Though the print editions confine such images to supplements, the online editions foreground them and make sure that the reader sees those images before they read/see anything else.

Channels like NDTV or CNN-IBN post live videos in their home pages justifying the principle that distraction is the opium of modern times.

Before we know what is happening around us that has a bearing on our lives, we are given the exclusive privilege of knowing about Taimur Ali Khan’s airport look or Anushka Sharma’s pregnancy outfit or Malaika Arora Khan’s daily regimen or Disha Patani’s wardrobe with a conviction that they indeed constitute not just our social world, but also our moral universe.

From 'Times of India':

Not knowing these developments will apparently dilute our right over citizenship. If you thought it is not voyeurism, look for captions that declare ‘a sneak peek into x model’s bathroom/gym’ or ‘leaked photos of model y’. Or try to decode an inviting line under a semi-nude model that declares ‘nothing to see here, just actress y chilling in the beach’ or ‘model x raises temperatures’.

It is more tempting if the model in question has a non-Indian or cross-religious/ethnic boyfriend that can titillate even as it expresses cosmopolitanism (as in the coverage of Priyanka Chopra or Krishna Shroff or Richa Chadha or Tapsee Pannu).

Some predictable expressions to capture this new tendency are: models being ‘too hot to handle’ or ‘slaying in a bikini’ or ‘nothing to see here’. Though by no stretch of imagination models’ ‘leaked’ photos can be associated with journalistic objectives, they betray the codes of contemporary practice.

Such journalism is the celebration of the flesh and a serious attempt to create voyeurs out of citizens. The first thing that a family man/woman does these days after collecting the morning newspaper is to detach the supplement part of the newspaper so as to immunise his/her kids from the doses of democracy they abound in.

Commodification of women’s body for the male gaze is passe. What is in vogue is not the consumed body; it is the consuming body that needs bikinis and is waiting to be photographed. Also, the desired body of the bikini model can create thousand aspiring consumers who will find salvation in the marketplace.