Why Can’t Our Crematoriums Be Grand And Clean? Coimbatore Shows The Way 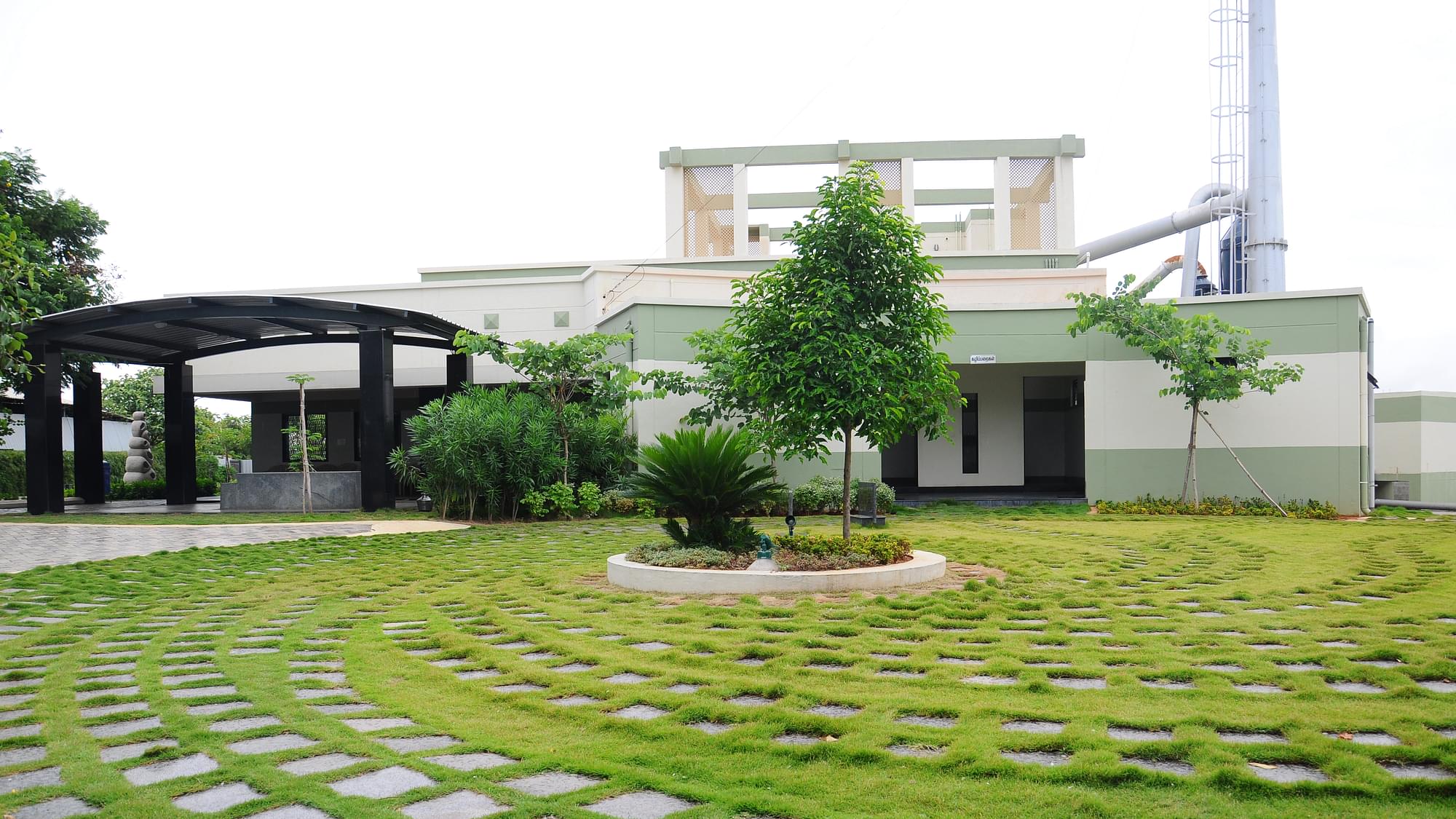 Coimbatore’s crematoriums are a living man’s dream come true after death! Serene and sombre, they are inviting, to say the least. The gardeners on the manicured grounds are, like those outside mansions on Palm Beach, Florida, hard at work all day long.

Time was when the ‘shamshan’ was a dead place, shabby and screaming for maintenance, strewn with dead leaves and dried human excreta, dens of ‘dhongi babas’, alcoholics and drug addicts, haunted by ghosts.

Not anymore, crematoriums in Coimbatore have become havens of peace and tranquility. Philanthropic industrialists and non-profit organizations have taken over the responsibility of maintaining them, lending them an aesthetic value.

The GKD Electrical Crematorium(GKDEC) has two electric cremating facilities. Operational since 1992, the ambience too is pleasing to the eye and senses.

The landscaping is eye catching. People of all faiths who opt to electrically cremate their dead are welcome to do so at GKDEC. It charges the fees levied by the corporation, and submits every detail regarding a death to the municipal body. It has two electrical cremating facilities which function at the same time and eight bodies can be cremated per day at a charge of Rs 750 per body.

“It was the idea of Dr G K Devarajulu, founder chairman of Lakshmi Machine Works Group. He was always into social service. Constructing a full-fledged electric crematorium was one of his dreams. As there was no electric crematorium in Coimbatore way back in the 90s, he decided to construct one. He constructed the city’s first electric crematorium without any pollution emission in a systematic manner,” shares the board of trustees from GKD Charity Trust.

The first Kayanta Sthanam was set up in Nanjundapuram. It doesn’t rob the grieving family of its sense of loss. Instead, it gives the feeling that the departed is getting the respect he/she deserved.

Those entering the grounds of the Kayanta Sthanam are struck by the greenery, the abundance of flowering plants, the immaculate landscaping. The fountains and a pond with floating lilies, goldfish swimming in it.

“We are converting crematoriums to LPG-fueled crematoriums. Cutting wood is hard work. Also, dry wood is hard to find in the rainy season. There are transportation problems,” says Swami Abhipada of Isha Foundation.

“For all these we need extra manpower. Carbon emission is another problem. The way we cremate each departed body is based on a complete fundamental process.”

The charges are not a deadweight. “We also have a Kala Bhairava Temple where we perform rituals in a traditional way. Records of cremations are meticulously kept. We charge Rs 1,750 per cremation and Rs. 500 for a hearse. If the family asks for a freezer, we arrange for one,” says Swami Abhipada.

Isha Foundation employs 42 people to run and operate its eight crematoriums spread across Coimbatore. The employees include those who operate the crematoriums, housekeeping staff, building maintenance and the gardening staff.

Earlier in 2009, the barren burial ground in Saravanampatty required a Rs 3 crore investment to construct a building, compound wall and a biomass gasifier crematorium for the Moksha Griha Electric Crematorium (MGEC).

Set up by K Gopal Memorial Trust, one of three charitable trusts of CRI Pumps, MGEC was bestowed with the platinum rated IGBC (India Green Building Council) Award in 2015.

“Our project is the first crematorium to be certified under the Green Landscape rating system. We scored 81 out of 81 credit points, which is considered a remarkable achievement,” says Raja S of CRI Pumps.

MGEC is an eco-friendly biomass crematorium which uses wood for fuel. It won the Hudco Design Award, in the category ‘Landscape Planning and Design’ in 2014 and was recently accredited with ISO 9001: 2008 by TUV Nord.

Set on 1.5 acres, GMEC was completed in 2010. It’s a living example of a sustainably designed and maintained landscape. The dilapidated and undesirable ‘old site’ was transformed into a clean, green space of peace and dignity.

It has a renewable biomass gasifier-based crematorium instead of the conventional electric type. The park serves as a space for people to perform various funeral rituals and mourners to amble in peaceful contemplation.

The entrance is created around a huge rain-tree. The driveway runs between a fig tree and copper pod trees. 72 per cent of the greenery is of species that flower, bear fruit and support wildlife.

Organic garden waste is composted on-site and used as a fertilizer. Recyclable waste is segregated and sent for recycling. Only organic pesticides are used in the garden. There are also uniform step-less surfaces in all outdoor areas, ramps at all entrances and toilets for the differently-abled.

“It is very easy. After the body is taken to the crematorium, it is kept in a neat and clean place. Rituals are performed. After my mother’s body was cremated we got her ashes within no time,” says Kuppuswamy.

The family was charged Rs 600 for the ambulance service, Rs 450 as handling charges for cleaning and collecting the ash and Rs 550 as crematorium maintenance charge.

Pricol, manufacturers of automotive instruments, established Nithyananda Crematorium in 2006. It uses a biomass gasifier unit to cremate bodies. It was set up in association with the Periyanaickenpalayam town panchayat under the company's Pricol Rural Development Programme (PRDP), part of the company’s corporate-social responsibility.

Pricol managing director Vijay Mohan says Nityananda Crematorium was built at a cost of Rs 85 lakh. Pricol employees contributed a day's salary to establish it in memory of company founder N Damotharan. The charge for per body cremation was fixed at Rs 750. It runs on a non-profit basis.

The biomass gasifier uses wood from thorny shrubs (veli kathan) for fuel. The smoke emitted from the furnaces escapes through a 100-foot chimney, routed through a scrubber.

The abandoned crematorium in Chokkampudur, R S Puram, was maintained for 10 years by the Madurai-based Jwala Equipment and Consultants. But not happy with the set-up, the city corporation called for an open tender, and in December 2016, K Easwaran, managing trustee of Coimbatore Social Service Trust set up the Chokkampudur electric crematorium.

“When I took over, I replaced the old staff with eight people I chose to run the operations. They included a gardener, a record-keeper, a crematorium operator, an ambulance driver, a sweeper and a security guard,” says Easwaran.

Before beginning operations, he got the old and worn out equipment tested, repaired some that required repairs, serviced the control panel board and scrubbed up the chimney. Flowering plants were brought in along with a Kala Bhairava statue.

The Chokkampudur crematorium works from 8 am to 6 pm. It charges Rs 600 for ambulance and Rs 1,000 for cremation. Special puja for Kala Bhairava is conducted every Friday and Saturday with the lights left on for 24 hours on both those days.

Electrical crematorium cost around Rs 30 to 40 lakhs, while the gasfire crematoriums can be installed for around Rs 25 lakhs.

The long-term challenge is manpower. Not everybody in town is interested in working at crematoriums. It is considered inferior, a social stigma.

“Almost 99 percent of them are alcoholics. They say how can one do such a job without liquor consumption? So, we have a rule that no one consumes alcohol during work hours. Funds for basic amenities is another challenge,” says Swami Abhipada.

It’s because of acute shortage of manpower and funds that the Coimbatore City Corporation decided to give charge of the crematoriums to private organizations, industries and non-governmental organisations.

“Maintaining a crematorium requires a lot of effort and our main motive is it shouldn’t be the place where people dislike to come. This has also helped reduce anti-social activities taking place in cremation places,” says city health officer K Santosh Kumar.

There are long term challenges but those cannot be addressed because the leases on the crematoriums are for the period of the contract.

“I cannot bring permanent change because the contract is for three years. I have requested the corporation to give me the authority, so that I can maintain and improve what I am doing and have done so far, says K Easwaran.

Due to acute water crisis many crematoriums are facing difficulties in watering the plants and grass. That is a shame, indeed.

Purnima Sah is a Coimbatore based independent journalist and a member of 101Reporters.com, a pan-India network of grassroots reporters. She tweets at @puri_sah