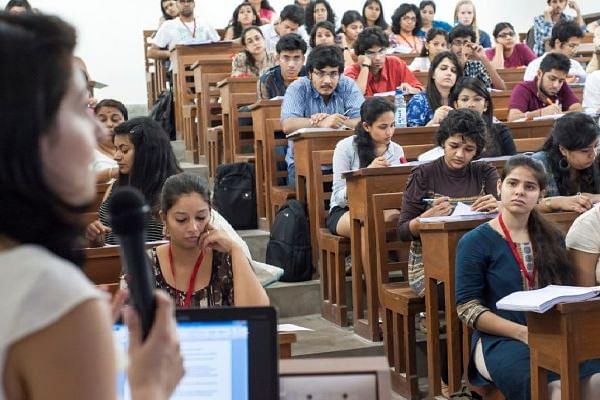 Students in a classroom.

Over the last few months, this author has interacted with quite a few entrepreneurs and senior professionals, who have started or on the way to starting public policy schools. These are post-graduate programmes offering degrees or certificates in public policy.

These entrepreneurs articulated the vision of their institutions based on their personal convictions of what is needed for young leaders.

For some, the main thrust of public policy programmes should be on academic rigour, for some it was practical internships, for others it was the width of exposure and mentorship.

There has been a surge in the number of youngsters wanting to participate actively in the big public debates of our time. Their idealism to contribute is heartening and should be welcomed.

In the political space, there is an exponential growth in the involvement of young graduates and professionals in election campaigns.

Just to give a sense, when this author worked in the office of Bharatiya Janata Party (BJP) leader L K Advani in 2009, the number of young, educated, savvy professionals involved in the campaign over eight months could be counted on two hands. (Obviously, there would have been youngsters working with candidates, other teams in the party etc. I am discounting all that to make a limited point.)

In 2014, the petty-shop had grown into a supermarket, with hundreds working in Delhi and Gandhinagar for the Narendra Modi campaign. It became a hypermarket in 2019 with thousands of young people. Also, what was hitherto an unorganised set-up saw ‘formalisation’ with many election management agencies coming to the fore, employing youngsters in private company like set-ups.

Not only that, in government, Modi 1.0 can be considered a watershed in offering opportunities, in both scale and scope, to young professionals that are not a part of the formal bureaucracy. Concurrent developments in state governments should also not be forgotten. As officers on special duty (OSDs) or advisers or consultants in the ministries, or through agencies such as NITI Aayog, Invest India etc, the government opened up spaces for energetic youngsters to play their part in nation building.

While the above seem to be the main motives, there seems to be general increase in demand for ‘policy insight’. There are more people that aspire to be politicians. Some people just want to make better sense of the conversations on social media.

Also, much neglected in the conversations is the idea of media, think tanks, non-profits, international agencies, social sector consulting firms, communication firms etc, as being part of the policy world. Employees in these organisations would need as much insight into the policy world as much as others.

But there seems to be general vagueness about the skills demanded for performing these roles. The lack of clarity is quite understandable, since even within the policy space there is a great diversity of KSAs (knowledge, skills and abilities) that are required to succeed.

For instance, in political campaigns, the KSAs required for preparation of manifestos are quite different from that for creating media campaigns or on-ground coordination or analysing survey data.

In the government too, media management is different from policy research and programme management. If one is an aide to a minister one has to be skillful in a variety of things.

Given this width of the policy spectrum and the fact that generalised knowledge in today’s world available for free, it is imperative to mould public policy institutions as schools of practice. They should prepare students to operate with a fair bit of confidence in any of the aforesaid areas.

Policy schools should sensitise students to the ‘arts and crafts’ of policy making than teaching the ‘hard knowledge’ of drafting policies.

A fundamental flaw in designing curriculums of policy schools will be to see them as extended economics or sociology or political science departments. Harvard professor Ricardo Hausmann articulated with quite a flair on the differences between the ‘science’ of economics and ‘practice’ of policy (“Don’t Blame Economics, Blame Public Policy”, Project Syndicate).

It cannot be the primary function of the policy schools to make the students wonkish in a particular field. It should in many ways be thought of as generalist finishing schools for students that bring with them domain knowledge and ambition to contribute.

There are initiatives in certain institutions to work on innovating on policy design than worry deeply about delivery of policy. They operate in the intersection of what policy schools and economics departments.

The policy schools could have separate research centres on specific areas, such as say on environment policy or education policy. But there should be a clear understanding that policy making on the subjects such as environment or education involves much deeper study of the subject and work experience in the respective fields.

It is important for policy schools to focus on understanding of the Indian political systems and bureaucracy and how to deliver within those frameworks. Answering a simple question such as, “how to build a ring road around a city?” would necessitate a more than clear understanding of the technical and financial feasibility studies of the proposed project.

The understanding of various bureaucratic and political actors, fund flow, motivations, organisational structure, political economy of the day etc, are required to even completely comprehend the challenge.

Looked that way, it is obvious that most policy jobs are apprenticeships. Like an aspiring Bollywood actor or a carpenter, the skills and attitudes are learned on the job over a period of time. A peek into the environment through internships will provide a much-required orientation to the role.

Also, success in such a whimsical field of work with so many ‘uncontrollables’, which happens over the long run, calls for deep and constant self-enquiry. Whether psychological resilience could be taught in schools has always been stuff of debates. But mentorship will definitely help.

Usually, in politics as in any other fields, professionals pick up mentors on the way. Effective leadership courses in one-year or two-year programmes and exposure to ‘life-coaches’ can offer platforms for further ruminations and self-development.

Also, students should be guided to figure out their place in the policy world based on their affinities and personality traits.

At the risk of stereotyping, someone who can handle sharp elbows can find politics amenable, while some who is happy leading small teams and niche causes can find smaller non-profits attractive.

As people grow, learn and experiment, they figure out their roles. In good high schools in Western countries such as the US, kids get exposure to various career paths to become scientists, athletes or artists etc.

Since these are skills-based schools, professors of practice become as important as professors with PhDs. The former bring invaluable insights as practitioners. It is the bane of our higher education system that a person that has played senior roles in say manufacturing firms, cannot teach supply chain management if he/she does not have a PhD.

When this author was student at Harvard Kennedy School, Nicholas Burns (of India-US nuclear deal fame), who did not have a PhD, taught one of the most popular courses on international relations.

Above all of these, policy practitioners should know the society they want to serve better. No amount of training will help if there is no immersive experience of working in a village or with the urban poor for a reasonably long period of time.

It will be unreasonable to ask of policy schools to provide all the KSAs required for producing quality public policy professionals. But if they expose the students to immersion programmes for at least six months coupled with relevant readings on history, philosophy, psychology, sociology, technology, politics, economics, they would be offering a great value add to both the students and the society.

Since policy schools themselves are entities in a burgeoning field, may be entrepreneurs will experiment and find ways to innovate. Some schools may endeavour to produce policy wonks, some may focus on soft-skills, while others on field work, etc. A bouquet of offering perhaps might help cater to diversity of demand from students and also supply of jobs from the market.

Public policy programmes can open the doors of imagination for students by exposing them to various avenues through which they can contribute to the greater good.

Basic understanding of working of our politics, government and society will have to complement strong domain knowledge to be effective in the policy world. Our compassionate and idealistic youngsters will have to walk through fire to become diamonds. Policy schools should coach them for that.

(An abridged version of this article appeared in Business Insider)