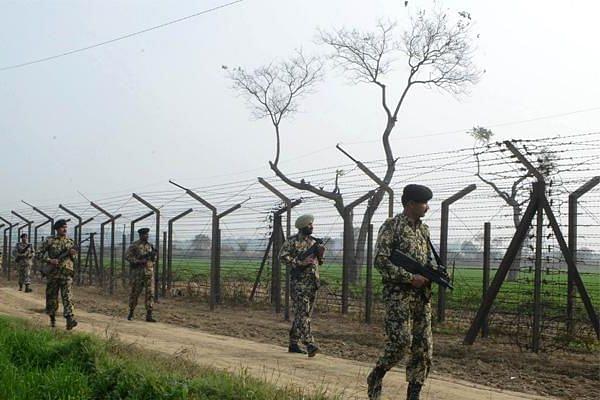 Troops at the India-Pakistan border

Although in the modern world the borders of nation-states constitute the primary mechanism controlling the intensity and direction of population flows, the strength of these man-made barriers do not always endure when put to the test by large-scale human movement spurred on by a spontaneous and organic phenomena.

India has experienced this failure of national boundaries on a grand scale in the North-East and West Bengal, where as many as tens of millions of immigrants have crossed over from its densely populated neighbour Bangladesh in the last few decades. This has to a large extent permanently changed the demographic landscape of the region.

There are multiple reasons why this large scale movement from Bangladesh could not be stemmed. At a practical level, securing India’s longest international border of 4,097 kilometres with Bangladesh is obviously not an easy task. Secondly, the lack of political will of successive governments does not help either in deterring those fleeing crushing poverty or political instability.

But there is a strong possibility that the most large-scale demographic threat India could face in the future may very well come from a different direction. An analysis of certain alarming statistics about the trajectory of population growth towards India’s North West will amply demonstrate that there is a brewing threat which needs to be discussed.

This means that West Pakistan’s population was about 9.33 per cent of India’s population, 67 years ago. Pakistan’s latest census, conducted in 2017, reveals a tectonic shift in this comparative number.

The 2017 Census of Pakistan has calculated the country’s total population to be approximately 212.7 million people. The figure was unexpected as the CIA’s The World Factbook had estimated the country’s population to only reach about 202 million by that time. Other estimates were even lower, with the UN believing that Pakistan would have only 197 million people by 2017.

Although an exact comparison with official data for India is not possible to make since our last census was conducted in 2011, we can reasonably rely on the World Bank’s estimate that India’s population had reached close to 1.34 billion people in 2017 (other estimates are a tad lower).

This means that Pakistan’s population is now an astounding 15.87 per cent of India’s, a substantial increase in terms of proportion considering the time span in question.
Apart from the runaway population expansion that Pakistan has already experienced, what is, in fact, more concerning is that the country’s galloping demographic growth shows no signs of slowing down to a stable rate.

Even as India has gone from a country which used to be at the centre of Malthusian doomsday predictions not very long ago, to one which is now only a few years from hitting a replacement level fertility rate (the number of children each woman must bear to ensure a stable population level in a society), whatever little was done in the direction of family planning in Pakistan has failed spectacularly.

While India’s Total Fertility Rate (TFR) dropped from 2.9 to 2.3 between 2006 and 2016, Pakistan’s saw a decline from around 4.2 to 3.6 in the same period. This is a sociological anomaly as demographers expect fertility rates to drop faster in terms of absolute numbers in places which have high fertility rates to begin with.

The fertility divide between the two countries has become so comically absurd that Punjab, considered Pakistan’s most socio-economically advanced province, with a TFR of 3.4, now has a higher fertility rate than Bihar, seen as India’s most backward, where TFR has dropped to 3.3.

What is interesting to note in all of this is that Bangladesh, which at the time of its independence had a notably higher population and a marginally higher fertility rate compared to Pakistan, has brought its TFR down to the replacement level of 2.1.

This fertility differential over a relatively short period of time has created a remarkably drastic difference in the two countries’ populations today.

While Bangladesh in 1971 had a population of about 67.8 million and Pakistan had only 61 million people, the latter has galloped way ahead, with its 212.7 million headcount being substantially greater than the former’s estimated population of only 164.7 million in 2017.

In contrast to the clear underestimation of the growth of Pakistan’s population, India’s future demographic growth, assuming for a second no major outside migratory pressures, is likely overestimated. The UN’s medium projection for India’s population is a peak of 1.7 billion by 2060. This figure is based on the forecast that India’s TFR will hit replacement level only by 2035, and will thereafter stabilise at about 1.8.

The underlying fertility assumption behind this prediction is already close to being proven false; considering India’s recent pace of TFR decline, we could, in fact, hit sub-replacement fertility within the next two or three years, that is if we haven’t already reached it.

Moreover, looking at the pattern of fertility transitions in more socio-economically developed states like Punjab, Goa, Himachal Pradesh, etc, which have all seen TFR levels falling even lower than 1.8, it is certainly quite possible, if not probable, that we will see a decline of a similar degree in other states in the coming decades.

On the other hand, projections forecasting that India’s population will keep seeing stable growth well into the 2050s or maybe even beyond could actually come true if our northwestern neighbour is not able to solve its population crisis soon.

A continuing demographic explosion in Pakistan is not sustainable if state collapse is to be prevented. The country already receives a steady supply of dysfunction-causing elements from its difficult to protect border with Afghanistan, and its economy may very well never be able to come out of the vicious debt trap it is stuck in.

Further, as the country’s Prime Minister, Imran Khan, repeats whenever he gets the chance, the country’s water shortage problem is also reaching catastrophic levels. This means that not only is Pakistan’s population growing uncontrollably fast, its agricultural sector will also face growing problems in expanding food production in the coming years. This is without even considering how the direct water needs of so many more households will be met in the future.

Even as state collapse or the weakening of central authority in Pakistan would reduce the conventional threat posed by the country to India, such developments could also trigger mammoth population movements into our territory; an ageing but economically much more prosperous India would be seen as a prime destination for relocation by millions of determined migrants.

Thus, this growing India-Pakistan demographic divergence must not be overlooked by us. It may very well pose the most serious threat to the stability and integrity of our country in the decades to come.