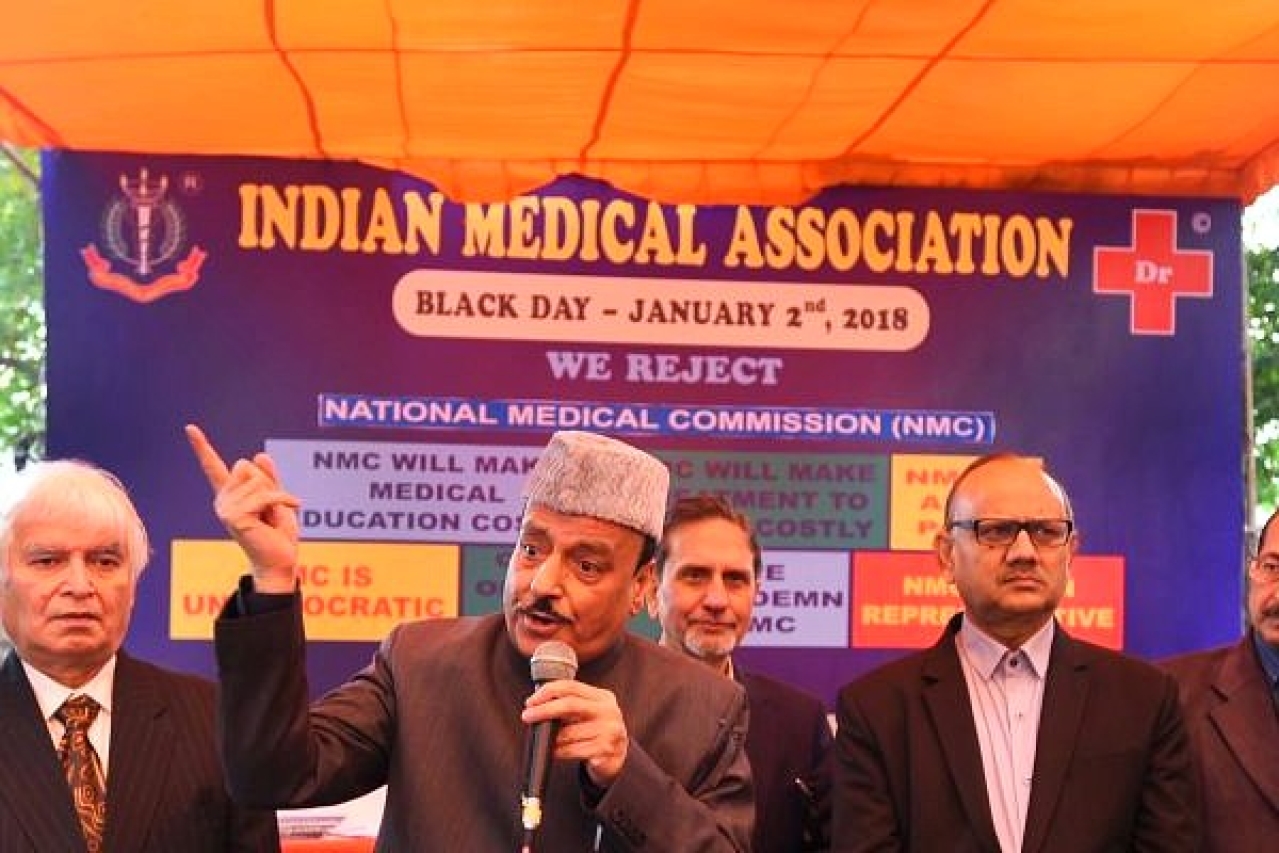 The 12-hour threatened strike by the Indian Medical Association (IMA) over the National Medical Commission (NMC) Bill 2017 was called off yesterday (2 January 2018) after the bill was sent to a select committee of Parliament for scrutiny. But their proposed protest should largely be seen as an attempt by allopathic medical practitioners to maintain their lucrative monopoly of the trade, and avoiding external pressures to improve ethical standards.

Not that some of their concerns are wrong. The two provisions of the bill that got the IMA’s back up include the abolition of the Medical Council of India (MCI) and its replacement with a National Medical Commission (NMC) as regulator and the proposal to allow doctors practising Ayurvedic, homoeopathic and Unani medicine to prescribe allopathic cures after doing a short bridge course.

If self-regulation by elected members of the MCI is replaced by regulators who are largely beholden to the bureaucracy, we can expect no relief from the corruption that dogged the MCI. And if the decision to allow non-allopathic doctors to practice allopathic medicine becomes a free-for-all, the entire healthcare profession will lack legitimacy.

But it is one thing to flag concerns about the possibility of corruption and potential misuse of the bill’s provisions, quite another to pretend that the bill’s intentions are unholy to start with. They are not.

The logic behind the NMC Bill is sound – and actually a good preparation for a future where medical diagnosis and cures will be additionally mediated by technology and artificial intelligence (AI). The level of actual competence and experience required for future medical practice will be far lower than what is now expected.

The main reason why the NMC’s provisions are an improvement over the current situation are the following:

One, the MCI is an elected body of doctors electing themselves. Self-regulation is seldom successful in preventing unethical behaviours by doctors and hospitals for reasons of professional solidarity. Just as we cannot have stock exchanges and mutual funds regulating themselves (we have Securities and Exchange Board of India for that), it does not make sense for doctors to regulate themselves. We can also see how another self-regulated profession – journalism – seldom penalises its own deviants. The corruption-tainted MCI can hardly claim to be a paragon of ethical behaviour.

The NMC bill calls for a 25-member body appointed by the government, and will include representatives from the Indian Council of Medical Research, the Directorate General of Health, and other members, presumably practising doctors and health experts and institutions. There will be four regulatory bodies under the NMC, one each for undergraduate and postgraduate education, one to oversee medical assessments and ratings of institutions, and a third for supervising ethics and registration of those allowed to practise medicine. Entrance to undergraduate course will be through NEET, the National Eligibility-cum-Entrance Test.

The MCI and IMA can argue hard for making sure that these new regulatory bodies are truly independent and don’t just become post-retirement sinecures for the IAS and other babus. But they have no case to retain their monopoly on self-regulation. The days of self-regulation are over.

What has got its goat is another provision in the bill which allows doctors from non-allopathic streams to practise as allopaths. Clause 49 of the Bill would allow a joint session of the NMC, the Central Council of Homoeopathy and the Central Council for Indian Medicine “to enhance the interface between homoeopathy, Indian systems of Medicine and modern systems of medicine". The idea is to promote “medical pluralism” by creating specific modules to develop bridges between these systems and the allopathic system. The bill says that “the joint sitting may, by an affirmative vote of all members present and voting, decide on approving specific bridge courses that may be introduced for the practitioners of homoeopathy and of Indian systems of medicine to enable them to prescribe such modern medicine at such level as may be prescribed.”

The logic for allowing this cross-pollination is solid. Regular doctors from the allopathic stream, who tend to pay lakhs or even crores to get their MBBS degrees, often refuse to serve in rural areas where they are most needed. Hence the need to encourage other types of “doctors” to expand the total availability of healthcare professionals to administer basic services to distant areas.

The allegation that this will encourage quacks without an MBBS degree to become doctors needs to be countered by the reality that their refusal to serve in rural areas has left the poor at the complete mercy of “real” quacks. And homoeopathic, Unani and Ayurvedic doctors are not quacks. They spend four-and-a-half to five-and-a-half years studying substantially the same physiology, biochemistry, and other subjects that allopathic doctors do, though the emphasis obviously is on traditional knowledge bases, including the medicinal properties of herbs and natural substances. Allopathy depends more on man-made chemical compounds for cures.

While an Ayurvedic doctor need not be allowed to practise unlimited allopathic medicine, there is absolutely no reason why they cannot prescribe standard tests and prescriptions for well-known afflictions like TB, or skin and other diseases common to the Indian sub-continent. Even nurses should be able to do that.

But there is a more important – and futuristic – reason to change qualifying norms for doctors. Increasingly, technology and artificial intelligence (AI) allow machines and software to do 80 per cent of the jobs that doctors do, and there are already algorithms that can analyse human medical records and come up with the most probable diagnosis, given a set of symptoms.

In fact, human doctors can go wrong in their diagnosis 20-25 per cent of the time since there are thousands of diseases but only around 200-300 known symptoms. The IBM Watson computer can search through thousands of known research papers and disease records to come up with probable diagnosis and treatments, and, with more genomic data, may even be able to prescribe the exact dosages needed based on the patient’s age, gender, DNA data, physiology, et al.

One study at the University of North Carolina School of Medicine found that Watson’s treatment for cancer matched that of oncologists 99 per cent of the time; but, more important, because it can read and store thousands of documents in minutes, it could find treatment options that human oncologists missed in 30 per cent of cases. The AI machine also diagnosed – in 10 minutes flat – a specific leukaemia case in Japan that had stumped University of Tokyo doctors.

More important, machines remove human biases, including the need to prescribe unnecessary tests or surgical procedures merely because expensive machines bought by commercial hospitals need to be amortised through high usage. A USA Today story indicated that US doctors often prescribe unnecessary surgeries, and the Indian situation can’t be very different, given fewer checks and balances. Ace investor Vinod Khosla set the cat among the pigeons when he asked whether we need more doctors or better algorithms to treat disease.

In an article published in Fortune, Khosla, quoting a John Hopkins study that indicated that more than 40,500 deaths occur in ICUs in the US due to misdiagnosis, observes that “healthcare today is often really the ‘practice of medicine’ (based on past tradition) rather than the ‘science of medicine’ (what really works as treatment).”

Says Khosla: “Much of what physicians do (checkups, testing, diagnosis, prescription, behaviour modification, etc.) can be done better by sensors, passive and active data collection, and analytics. But, doctors aren’t supposed to just measure. They’re supposed to consume all that data, consider it in the context of the latest medical findings and the patient’s history, and figure out if something’s wrong. Computers can take on much of that diagnosis and treatment and even do these functions better than the average doctor (while considering more options and making fewer errors). Most doctors couldn’t possibly read and digest all of the latest 5,000 research articles on heart disease. And, most of the average doctor’s medical knowledge is from when they were in medical school, while cognitive limitations prevent them from remembering the 10,000+ diseases humans can get.”

Given this reality, the future of the medical profession – both in India and abroad – will be about doctors accepting their human limitations and using machines and AI to make a final judgement on disease and its treatment. In this scenario, for today’s MBBS doctors to believe that they know more than other kinds of doctors merely because they did allopathy rather than Ayurveda or homoeopathy is rather arrogant.

Doctors need humility to understand that their knowledge should be used in conjunction with machines that can give them an even better perspective on how to treat patients.

There is no case for protecting doctors from their ignorance, and the NMC Bill is just one small corrective coming their way.

Jagannathan is Editorial Director, Swarajya. He tweets at @TheJaggi.
Get Swarajya in your inbox everyday. Subscribe here.
Tags:
486 Shares