The India Ideas Conclave - Towards an enduring intellectual infrastructure 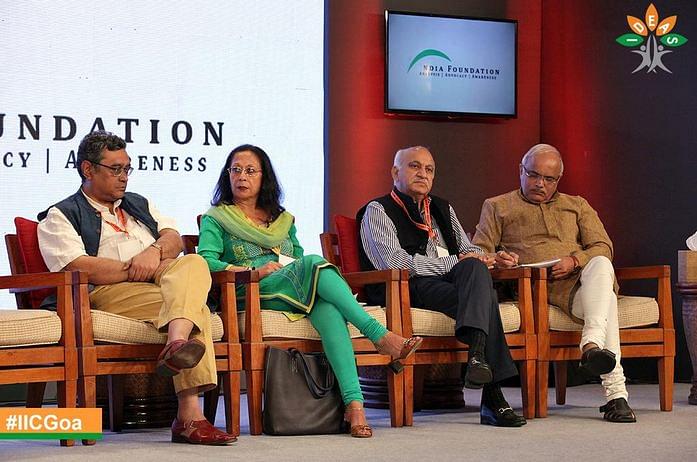 Many a discerning minds would not have missed the symbolic significance of the conclave’s title – India Ideas.

It was a long distance ideologue of Congress, embedded in American academia, who coined the much vaunted phrase – ’Idea of India’. This chimerical construct elevated Nehruvian notion of nationhood as the only valid and viable way forward for India.

The vacuous phrase then travelled so far in our narrative that it almost became an unquestioned article of faith for Nehruvian intelligentsia. Modi, for instance, was supposed to be antithetical to everything that “Idea of India” exemplified. That Modi scripted a massive victory, despite a virulent vilification campaign, by the “Idea of India “brigade, demonstrates the irrelevance of those very ideas, that only a handful of politically invested academics sought to advance.

With political power won, the emerging Indian right ecosystem perhaps believes that the time is right for mounting an intellectual challenge to a manufactured mainstream consensus on what constitutes ideas on governing India. Power sometimes leads to a sense of intellectual closure.

The Vajpayee regime experience continues to haunt them – where winning power was thought to be an end in itself. Influential sections of Indian right have figured out they may have triumphed politically but the battle of ideas has to be won decisively. And it is in this recognition perhaps that the India Ideas conclave was conceptualised.

Over the years, the RSS as a matter of tactic, expended energy on doing robust groundwork . It ran focussed campaigns that helped it enhance its influence among marginalised section of the society and rapidly expanded its social base. It is only in the last few years, that the Sangh has been taking tentative steps in collaborating with like-minded think tanks to build a wider intellectual movement. India Foundation is among the new age think tanks that have emerged as critical to Indian right’s attempt to revitalize itself with new ideas.

The Delhi based think-tank is perhaps best placed to organise a conclave of this nature. This think-tank has proved to be a talent pool that the Modi dispensation has tapped into for filling key positions in the current government.

Key members who have been associated with this think-tank – Suresh Prabhu, Nirmala Seetharaman and Jayant Sinha – played a pivotal role in executing the transformative agenda that the Prime Minister had envisioned. The strategic leadership for this think-tank comes from Ram Madhav, formely a RSS ideologue who is now with the BJP and Shaurya Doval.

Adding to the immense diversity was the presence of distinguished academicians, eminent economists, educationists, entrepreneurs, innovators, gender activists, energy professionals, bankers and media. For a movement that has been accused of being insular, the conclave saw a significant number of foreign delegates

A refreshing aspect of the conclave was the conspicuous absence of the usual talking-heads, who dominate the op-ed enterprise. Preponderance of participation came from those, engaged in productive economy, having hands on experience in shaping institutions, those with proven success stories in entrepreneurship. In short, all those who have stakes in wealth generation process of the country.

The conclave witnessed enormous churning of ideas. From nurturing entrepreneurship to fostering innovations targeted at those at bottom of the pyramid. There were discussions on challenges of lighting up India through radical reforms in power to building capacity and competence in higher education by triangulating access, excellence and equity

Sri Sri Ravishankar set the stage rolling by his lucid ideas on how India can advance its soft power status by focussing on clearly identified verticals. Even the sceptics among the audience were impressed when Sri Sri explained how he had creatively deployed spiritual techniques to spread Indic civilizational values in far flung places

The session on Economics was of particular interest, especially in light of the criticism that the Modi government, has been reluctant in going the full distance on unleashing reforms and kick-starting economic growth. Clearly Prof Arvind Panagariya was the most impressive speaker on stage, identifying the priorities that Modi should focus on – labour intensive manufacturing, continued recasting of labour laws and re-framing Land Acquisition Bill (which according to him is a huge dampener for economic growth). One was left with a feeling as to why Prof Panagariya is not at the thick of things in Delhi.

Another session that was interesting was the one on ‘New Media and New Politics’. The panellists, all seasoned media veterans, while acknowledging the tectonic shift in media landscape, gave an impression of being reconciled to a life of uneasy co-existence with social media and the larger digital media

What was interesting to note during the conclave was the level of interaction between the ministerial colleagues of Modi with the conclave participants. They were seen copiously taking down notes, listening to constructive criticism and were open to suggestions from delegates. Suresh Prabhu and Jayant Sinha did appear to give an impression of being deeply grounded and reflective.

Overall the India Ideas conclave seemed to be a great beginning, bringing together like minded individuals on a common platform. As Swapan Dasgupta (member of Swarajya EAB and key organiser of the event put it) “ We had to make a beginning somewhere even if it means an imperfect one”