Chamoli Tragedy: Rescue Teams To Also Look At Area Outside Tunnel For Fallen Workers Even As Hope Dwindles For Those Trapped Inside 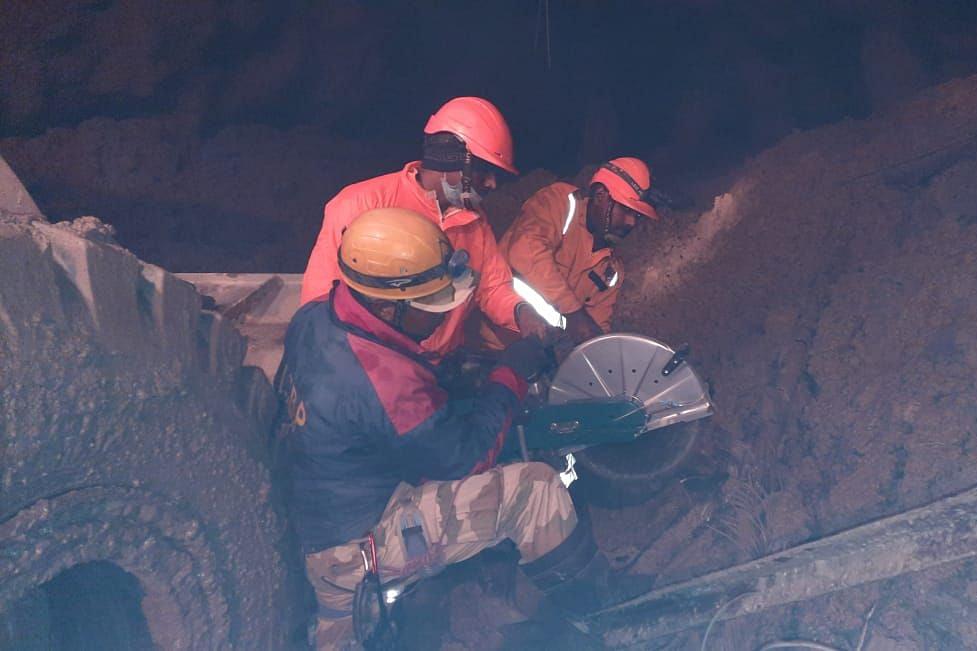 Rescue and relief operations continued in Uttarakhand's Chamoli district after flash floods in the Tapovan-Reni area washed away parts of the Tapovan on 7 February, through 9 February (Tuesday) and 10 February (Wednesday).

The NTPC Tapovan hydel project was washed away in the raging waters, and the flash floods left parts of Tapovan area in deep slush -- reportedly, 20 feet deep.

On Tuesday, State Disaster Response Fund (SDRF) told this author that the team was "keeping a positive approach towards the opening work" of the remaining patch of the tunnel which was packed with debris and mud.

Until the last update, today, (Thursday 11 February) rescue work in the tunnel had resumed after it took a halt owing to the rising levels of the Dhauli Ganga river.

SDRF and district authorities have urged sections of the media against sensationalisation and speculations on the rescue efforts in a press conference.

The first set of rescues on 7 February and 8 February was made at this site in the hope of retrieving and rescuing nearly 35-39 workers believed to be trapped inside.

The teams are working tirelessly to retrieve workers who are caught in the slush and debris inside the tunnels in Tapovan area. ITBP officials conducted an air recce on Wednesday to take stock of the situation.

Drilling operations started by rescue teams at 0200 AM to peep into the slush flushing tunnel 12 to 13 meters below. This is being done from the tunnel where rescue teams are presently taking out slush.#UttarakhandGlacierBurst #TapovanTunnel pic.twitter.com/OgIaHD8ILZ

On Wednesday, rescue teams faced challenges in their work owing to the flushing of slush in the tunnel. It added to the difficulties faced by the rescue teams that are working day and night, against the dwindling hope and the clock.

On Wednesday afternoon, Vivek Pandey, ITBP spokesperson, told this author over the phone: "A big headway hasn't been made owing to the crawling back of the water, slush and mud. Nothing much can be said at this point about the headways." The team could make a headway until 120 metres of the tunnel, Pandey adds.

Outside of the tunnel at the site, the slush in parts of Tapovan is reportedly 20 feet deep. Several missing workers, locals say, would be found now buried in the slush here.

On Tuesday, This author spoke to Kishore Singh, a resident in the Tapovan-Raini area over the phone.

He said that he saw the fury of the raging rivers swallow and wash away the barrage at Tapovan. He added that rescuing the 37 people who were feared trapped in one of the tunnels, was a priority of the teams deployed at the site.

Singh points out that in addition to these operations, the search for the missing who are trapped under 20 feet of muck at the barrage site is a must. "The dear ones of these people want closure as hope dwindles for survival of those who went down with the debris of the barrage when the waters struck. We have witnessed it happening."

The rescue or retrieval of those people who went down with the waters outside the tunnel, is getting sidelined at the moment, Singh added on Tuesday.

He adds that 50-60 workers who were seen hit by the fierce deluge outside of the tunnel would be found inside the muck. "Those who were working at the gates, in all probability, were washed away. Around 150 workers were engrossed in steel binding work. The search should take place there. At least the bodies should be out by the third day with the efforts of the teams deployed here..."

On Wednesday, Pandey added that the teams steered by the ITBP as one of the responding forces, will now look at the areas outside the tunnel, "where workers had fallen from the barrage" besides the ongoing work inside the tunnel. Information on the headway made in this regard is awaited.

Gloom struck families living in Dhak village of Chamoli. Four people from the village, who were working for two different power projects in Tapovan, went missing after the floods. Hope is dwindling for their survival. They were in touch with their families the previous day.

One of the four missing persons from Dhak village in Chamoli is Harish Bisht. He is married and has three children. His brother Bharat Bisht has been distraught since the time he receives news of the floods at the "company". He says, "With my brother Harish, Rajesh, Anup and Pankaj... these three from Dhak village have gone missing in Tapovan... the site is three kms from our village and they were on duty."

His own sense of the scale of the disaster doesn't give them much hope for his brother's survival, and this is evident in his voice. He adds, "I have requested chief minister Trivendra Singh Rawat for new techniques and machines in clearing the tunnel. They are doing what they can...what can be done now."

As the hope of the survival of people trapped in the tunnel and those believed to be stuck under the muck, dwindled and faded on the third and fourth day of the rescue, a mix of restlessness and grief hit the locals. Singh added that the camping of media at the site was irritating the locals "they are competing with each other to reach ground zero and it's all leading to drama."

Singh adds that as per their own sense, the raging waters came from nearly 7 kms behind where he lives. At first the locals thought it was either a landslide or an avalanche. He added, "When it gushed towards the river, we were struck by strong doubt. We immediately alerted the general manager of the company to remove the workers from the barrage. The raging waters gave everyone very little time to act."

Good news trickled in on Wednesday when a group of workers who were declared missing contacted their families three days after the disaster hit. These workers were stranded in one of the villages which are now cut off owing to the damaged jhoola bridges and damaged parts.

They reportedly contacted the ITBP and local authorities after reaching an area where they could get access to mobile network.

"I along with other persons was working to establish the mobile network of a company in a remote village when we got to know about the flood. It took us almost three days to reach downtown. After reaching the area which has mobile services, we contacted our families," Sunny Dutt, a worker has been quoted as saying.

They were declared missing since they could not be contacted and there was no network and the families thought they were washed away in the floods.

Meanwhile, the ITBP has been working to deliver relief material to cut off villages. The ITBP has details of the number of houses in 12 villages in the region.

These villages are Jugaju, Juagwaar, Gwar, Lata, Suki, Fagti, Long, Ranipalli, Pang, Suraitata, Balgaun, and  Talma. Efforts from the ITBP and the state government are helping restore relief in these cut of villages. The ITBP has begun work on restoring jhoola bridges.

Teerath Singh Rawat, Member of Parliament from Garhwal told this author over the phone that restoring the damaged jhoola bridges to re-establish communication of the cut off villages is a priority. The matter has been taken up with the district authorities.