Ground Report: What Bundelkhand Expressway Could Mean For UP’s Most Neglected Region 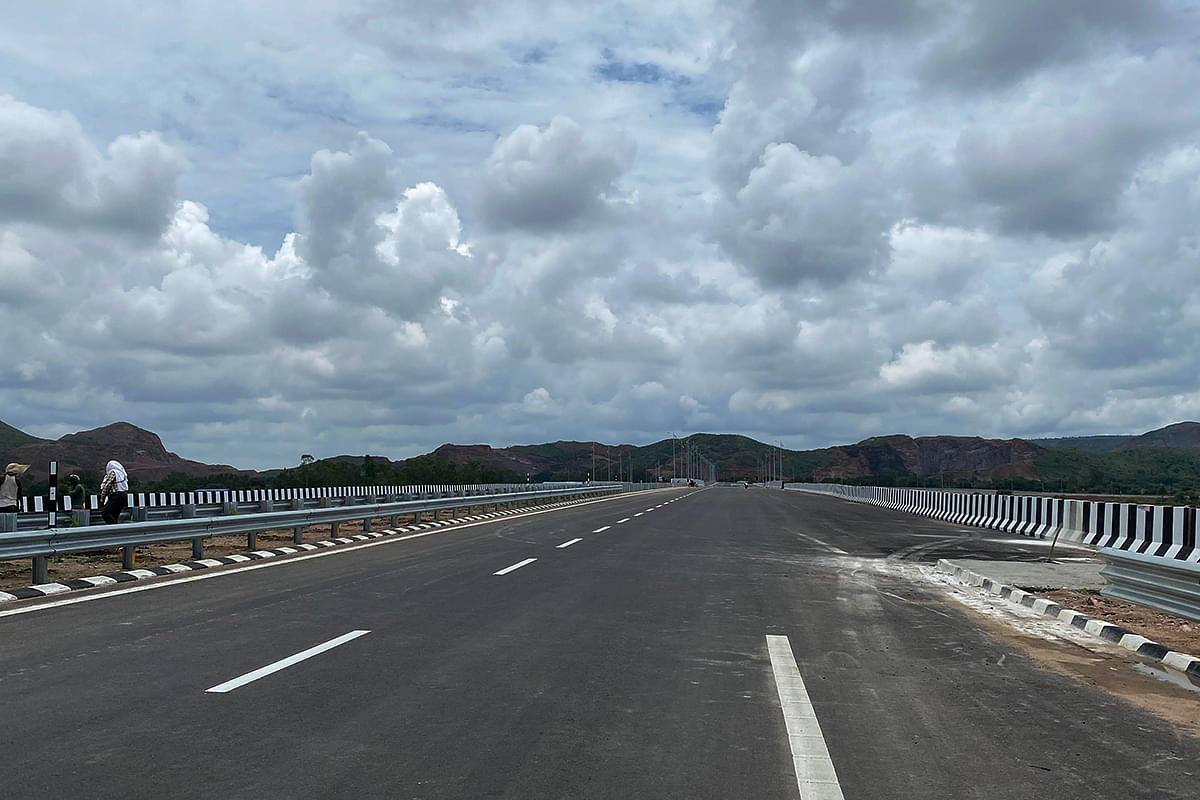 Beginning of the Bundelkhand Expressway, near Bharatkoop, Chitrakoot. It is surrounded by Chambal valley, once known as a hideout of bandits and dacoits.

A road journey on the newly constructed, 296-km-long, four-lane, Bundelkhand Expressway puts a spotlight on the metamorphosis taking place in Uttar Pradesh.

With its seamless road infrastructure coming up at a fast pace, there is a revolution brewing within the state. Apart from economic transformation, people hope to witness a rise in their aspirational value, especially the youth.

The question of how far they can dream and how quickly they can achieve them would substantially be answered once the fruits of progress begin trickling in the next few years.

As we drove from Delhi to Chitrakoot, the path to UP’s progress began unfolding. Our journey on the Yamuna Expressway, from Delhi to Agra, went by in a flash. From Agra, we reached Etawah in less than two hours via the six-lane Lucknow-Agra expressway.

Branching out from India’s longest highway, was the Bundelkhand expressway. Joining the new and leaving the old paths induced emotions of excitement and nervousness.

At the start of Bundelkhand expressway, we met the toll staff who charged a fee of Rs 255. We were warned that in the coming leg of the tour, we would encounter deserted land. Finding fuel or food would be a task, so we better be prepared.

The Bundelkhand expressway is elevated and has several exits, on the way, to the seven districts of the Bundelkhand region that fall in Uttar Pradesh. These include Chitrakoot, Banda, Mahoba, Hamirpur, Jalaun, Auraiya and Etawah.

The expressway was inaugurated by Prime Minister Narendra Modi in July 2022 at Jalaun, 28 months after its foundation stone was laid in February 2020 at Gonda village, Chitrakoot. It has been constructed at a cost of around Rs 14,850 crores.

We made a pit stop at Dakore village, Jalaun, to refuel. Talking to the locals about the news of the expressway getting damaged in rains, we realised that there was a sense of disillusionment with the way the media suppressed the good work done.

Subhash (name changed), who works at the petrol pump near the village, told Swarajya that the cacophony of the headline-chasing media channels has little to do with reality on the ground. The one or two places where the expressway road had caved in due to heavy rains have already been repaired.

However, the way the news was presented was as if the entire expressway had been damaged. He added that he is looking forward to the opportunities the new expressway would bring to his region.

During our search for refreshments, a daily wage labourer, Wali Mohammad, guided us to Mahendra Singh Chaurasia’s tea shop. The tea shop owner, Chaurasia, was content with the way the present Yogi government has performed.

Even though the village he belongs to consists predominantly of Yadavs (generally regarded as leaning towards SP), he said that the inclination of the residents has, however, shifted to the present government. “Yogi Raj mein tassali hai aur sukoon hai (there is satisfaction and peace under the Yogi government)", he exclaimed. Our guide, Mohammad, agreed with him.

Wali Mohammad, however, was struggling as a daily wage labourer, making ends meet doing menial work. Though the village is relatively prosperous, in terms of people owning agricultural land that helps them in sustenance, they also earn through milk supplies, but also there are people who do not find a stable livelihood.

Chaurasia, however, felt that the situation would soon change as more industries would come up due to the expressway.

The Yogi government, in this year’s budget, has allotted Rs 400 crore for the development of the General Bipin Rawat Defence and Industrial Corridor in Bundelkhand, which it plans to complete in record time. Two of the six major nodes of the proposed defence corridor — Jhansi and Chitrakoot — lie in the Bundelkhand region.

Development of milk-processing units, handloom-based units, and food-processing units, in the region, is also in the pipeline. The aim is to generate jobs on a large scale. Currently, sand mining seems to be the only major industrial activity in the UP’s part of Bundelkhand.

The region’s industrial sector is severely under-utilised with little to no development. A significant reason for the absence of industrial growth could be attributed to lack of connectivity to the region.

That problem has effectively been solved with the construction of the Bundelkhand Expressway. As per a government press release, work on the creation of an industrial corridor in Banda and Jalaun districts, next to the Expressway, has already begun.

Bundelkhand is a region with a glorious past and abundant natural resources. However, decades of neglect had rendered the place as one of the most backward regions in the country. Severe droughts, dacoities, abysmal law-and-order, and lack of infrastructure, had been the cause of the region’s backwardness.

A lot is changed with concerted efforts to bring Bundelkhand at par with the rest of UP and India. The expressway is part of the vision to mainstream the region as a hub of economic and tourism activities.

The region has huge potential as a tourist destination too. Its history dates to ancient India. Chitrakoot is depicted in Ramayana as the place where Shri Ram, Ma Sita and Shri Laxman spent 11 years in exile. Every corner of the place has a story to tell.

Apart from Chitrakoot, which has been part of Ramayana Tourism Circuit, every district of Bundelkhand holds hidden historical gems waiting to be discovered. There are numerous ancient and medieval temples and forts that have not been fully explored.

The land saw waves of great rulers throughout its history, from Gupta to Chandelas, from Bundelas to Peshawas, and each left a deep imprint on the region’s cultural milieu as well as architecture.

In his speech at Jalaun, PM Modi spoke about Bundelkhand’s forts and urged the state government to develop a fort tourism circuit in the region to attract tourists from all over the world. Taking a cue from the PM's suggestion, CM Yogi Adityanath has directed officials to develop 31 forts that fall in the Bundelkhand region.

If the vision for the region bears fruit, one could witness reverse migration taking place.

Bidiya, a daily wage worker from the village Alona in Banda district, shyly admitted to having eight children, six girls and two boys. The boys, she said, had to migrate for work, while she herself struggles to find work near the village.

Due to lack of employment opportunities, migration takes place in huge numbers in almost all the districts of Bundelkhand. Only in Chitrakoot, which is a pilgrimage centre, the migration is limited as most of the people find livelihood opportunities nearby due to a flourishing religious-tourism sector.

Once the tourist footfalls increase, the hospitality sector in the region, too, would take off. Currently, it is negligible.

Throughout the drive on the Bundelkhand expressway, the green landscapes and clear skies dotted our vision, for as far as we could see.

The four-and-a-half-hour journey at an average speed of 100 km/hour, all the way to Chitrakoot, went by without any road bumps or hiccups. Thunder and rains lashed at the windshield of the car, but it did not hinder our vehicle’s forward march.

In the middle of our car drive, we could imagine the bustling periphery of Bundelkhand expressway in a few years with heightened economic activity, the emergence of new industries and the picking up of tourism. It is a beginning of a Bundelkhand that would not dare to dream but dream as if it was its second nature.

Also Read: How Bundelkhand Expressway Will Spur Economic Activity In A Region Long Ignored By Delhi And Lucknow