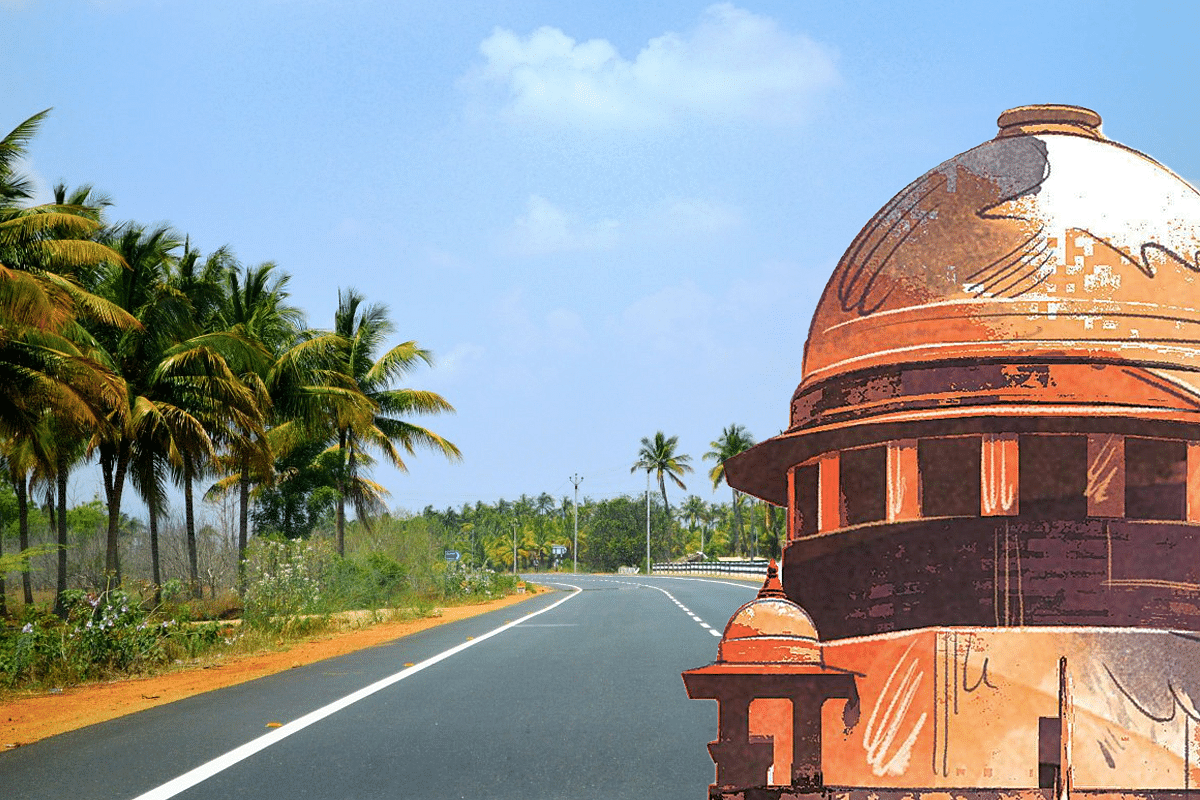 Supreme Court of India and a Tamil Nadu highway

The Supreme Court yesterday (8 December) approved the Union government’s ambitious Salem-Chennai eight-lane greenfield expressway, upholding the notifications issued for acquisition of land for the highway, and also ruled that prior environment clearance is not required for notification on land acquisition.

One of the positive outcomes of this verdict is that the Centre can now go ahead with the planning of national highways projects at least until the stage of land acquisition without any worry.

More crucial in the ruling are the apex court’s observations of the Madras High Court ruling in the case.

The Madras High Court had quashed the notification for acquisition of land for the project, leading to the Union government and National Highways Authority of India (NHAI) filing an appeal.

The Supreme Court’s ruling by the three-member bench, comprising justices A M Khanwilkar, B R Gavai and Krishna Murari, now nullifies the Madras High Court ruling and allows the Union government and NHAI to go ahead with their preparations for the project.

The apex court, in its ruling written by Justice Khanwilkar, said that the notification under Section 2 (2) for land acquisition were issued “only after due deliberations by the broad-based committee of experts”.

The judges said that they found the decision in conformity with the guidelines issued by the government.

Referring to the Madras High Court terming the notifications arbitrary, the apex court said that “such a decision cannot be labelled as arbitrary, irrational or taken in undue haste”.

The Supreme Court further said: “As a result, it was not open to the High Court to interfere with the change so articulated in the (experts) meeting held on 19 January 2018 or the notifications issued under Section 2(2)...”

It said that the declaration of a highway being national highway was within the exclusive domain of the Union government, dismissing the argument that landowners' prior approval should have been sought.

Referring to objections over a change of stretch/section of the expressway, the apex court said it was well within the Union government’s own guidelines for such changes and it had the full authority.

“Thus, there is no legal validity to doubt the validity of the notifications under Section 2(2) (of National Highways Act, 1956) and ex consequenti Section 3A of the 1956 Act as well,” it said.

Coming down on the Madras High Court observation quashing the notifications under relevant sections of the National Highways Act, the Supreme Court said: “The High Court has completely glossed over these crucial aspects and entered into the domain of sufficiency and adequacy of material including the appropriateness of the route approved by the competent authority."

“Such enquiry, in exercise of judicial review, is forbidden. Furthermore, the High Court, despite noting that judicial interference in acquisition matters is limited, went on to interfere in the guise of extraordinary circumstances obtaining in the case.”

The judges said the High Court order did not reveal any just circumstance for invoking judicial review jurisdiction and added that the government’s change of stretch ought not to have been doubted by the High Court.

Pointing out to the Madras High Court direction that in future, before the acquisition of land for development, the consequences and adverse impact on the environment must be comprehended, the apex court said there was nothing in the 1956 Act which insisted on prior environmental clearance.

There is nothing in the National Highway Rules, 1957, to remotely suggest that the Union government is obliged to obtain prior permission under environment and forest laws before issuing notifications, it said.

Referring to the Environment Impact Assessment notification in 2006, the judges said it does not “constrict the power of Central Government to issue notification under Section 2(2) or 3A of the 1956 Act”.

It said it was for the executing agency to obtain environment and forest clearance and this can happen only after the land is vested with NHAI. This would happen only after publication of the declaration of acquisition under Section 3D of the 1956 National Highways Act.

The apex court also said that until the vesting of the land, the Union government and its officials can enter the lands and undertake their survey.

“This is a very crucial observation by the Supreme Court. We can now go ahead with our reports on projects and prepare until before we start work for clearances such as environment,” said a Ministry of Road and Transport official, who did not wish to be identified.

The judges said the environmental impact “would be and ought to be” measured in relative terms at the local level and be site-specific, whereas the requirement for national highway would essentially be in the larger national interest.

“These observations, too, will help in future,” the official said.

Making it clear that prior environment clearance is required before actual construction or building work of the national highway, the Supreme Court said the acquisition proceedings would first have to be taken to their logical end.

The apex court, however, agreed with the Madras High Court order to restore the earlier entries of owners names on land records since the lands have not been taken over by NHAI.

The ruling leaves activists who had opposed the Rs 10,000 crore 274 km Salem-Chennai green expressway—which will help those driving from western Tamil Nadu and Kerala immensely—carrying out false campaigns and spreading rumours, exposed thoroughly.

Officials wonder if these people would be hauled up by the courts now that the Supreme Court has found nothing wrong with the Centre’s and NHAI process to initiate the Salem-Chennai green expressway project.

The Salem-Chennai expressway, which is part of the Bharatmala Pariyojana, will be on the lines of Delhi-Mumbai Expressway with eight lanes and is intended to help some of the backward regions in Tamil Nadu while cutting down the travel time between Chennai and Salem.

The Ministry of Roads and Highways came up with the expressway proposal as the Chennai-Bengaluru and Chennai-Madurai national highways are being used at nearly 150 per cent of their capacity. The traffic is projected to increase to 2.1 times of the current traffic flow.

The proposed expressway will help decongest the Chennai-Bengaluru and Chennai-Madurai national highways.

According to Kuppusamy of Palayam village in Harur taluk of Tamil Nadu’s Dharmapuri district, the problem cropped up since the State government did not let them know the amount they would be getting a compensation for the land being taken for the highway project.

His three acres of land along with his thatched-roof mud house are likely to be taken for the project.

“I have no problem in giving up my land and property, provided I am given a good compensation,” says Kuppusamy.

Kannan of Achankuttapatty Pudur in the same taluk says: “Our lands are taken for a good cause. We are happy over that, but we would want the government to be liberal with the compensation.”

Kannan’s six acres of land with mainly coconut trees are part of the corridor and he will have to give up three acres for the highway.

Many like Vidyasekar or Achankuttapatty believe that the highway will bring in economic benefits to the people of the region, which is a rain-fed area.