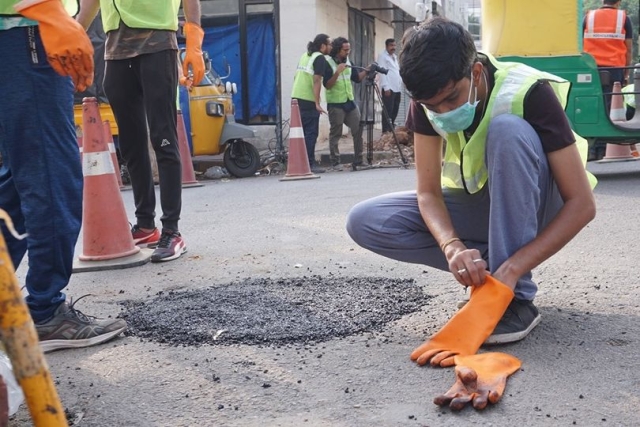 How Bengaluru’s infrastructure woes are hurting the city. (PotholeRaja/Facebook)

A recent private survey on start-ups should have given India’s Silicon Valley, Bengaluru, a shock. The report, by TiE, a global organisation of entrepreneurs, and Bengaluru-based research firm Zinnov, says that Delhi had more active start-ups than Bengaluru. It was No 1 by a wide margin.

While Delhi (ie, the National Capital Region) had 7,039 active start-ups, Bengaluru had 5,234, with Mumbai coming a distant third at 3,829. Hyderabad, Chennai and Pune had fewer than 2,000 active start-ups each.

There is a reason why this has happened despite Bengaluru having a head start in technology-driven start-ups: infrastructure. If Bengaluru is losing its crown in start-ups to Delhi (or NCR), it is primarily because its urban infrastructure is a disaster. This fact trumps Bengaluru’s head start in terms of tech, thanks to the fact that India’s world-beating software services industry is anchored in this city.

Even though Delhi Chief Minister Arvind Kejriwal says he does not have enough power to make Delhi even better (land and policing are managed by the Centre), he has control of social infrastructure, and can deliver at least here. The rest of the physical infrastructure comes from being the nation’s capital.

According to Ola Mobility Institute, the average speed on Delhi’s crowded roads is around 23 km an hour, 50 per cent faster than Bengaluru’s 15.5 km an hour.

Contrast Delhi’s infrastructure with Bengaluru, where the airport is two to three hours away from the tech hub in Electronics City. Delhi’s satellite towns like Faridabad, Ghaziabad, Noida and Gurugram are actually situated in different states, but as part of the National Capital Region (NCR) they have become independent engines of growth too.

Gurugram, which is close to the airport and is a part of Haryana, and Noida, which is in Uttar Pradesh, are start-up powerhouses on their own, with 1,544 and 1,004 active start-ups respectively. The infrastructure that links these hubs to Delhi is what enables them to collectively make NCR the start-up capital of the country.

Bengaluru faces the risk of falling even further behind Delhi, since no thought is being given to improving the quality of urban infrastructure and governance. Consider what is happening now.

On Tuesday (17 September), The Times of India reported that Karnataka Chief Minister B S Yediyurappa has retained Bengaluru Urban as his direct charge, while another report, in The Economic Times, indicated that the Bharatiya Janata Party (BJP) may gain control of the city municipal body – Bruhat Bengaluru Mahanagara Palike (BBMP) – too.

This is precisely the problem. If the man in charge of the city is the Chief Minister, and the ruling regime at the BBMP can change as and when the main dispensation in the state changes, there is no way we can get Bengaluru’s infrastructure fixed.

A chief minister whose political base is outside the city will decide the city’s future. Without in any way debunking the possibility of Yediyurappa’s ability to make Bengaluru better, the misalignment between the Chief Minister’s political base and his responsibilities towards the city is obvious. Bengaluru needs its own directly-elected mayor, and this needs power to be devolved from the state to the BBMP.

The reason why Mumbai is no great shakes in start-ups is also similar to Bengaluru’s problem: the urban power centre is in Mantralaya and the Chief Minister’s Office, who himself is from Nagpur, not Mumbai. Even though Devendra Fadnavis has proved to be a dynamic Chief Minister and fairly popular and efficient, it makes no sense for Mumbai’s fortunes to be tied to someone who is a Nagpur politician. Sure, a Nagpur politician can run the state, but should he run the state’s main metropolis indirectly?

But there is hope on the horizon for Bengaluru. Despite the poor state of its infrastructure, there are two things going for it: one is the critical mass it has achieved in terms of tech and engineering talent, where it now draws talent from all over India. The other is that it has become a huge consumption market – which means more possibilities of creating jobs and growth.

Bengaluru’s growth story till about a quarter century back was accidental: the British found it to be a nice city of lakes and good climate, and made it their leisure hub. In post-Independence India, the city became a public sector hub for electronics and aerospace, which helped strengthen its engineering base and brought diversity to the population.

Post-1990, Bengaluru became India’s software services capital, thanks to the tech and telecom boom. Innovation and entrepreneurship thrive on diversity and sensible urbanisation. Bengaluru has the former, but not the latter.

To be sure, the rise of Delhi and Bengaluru as start-up hubs is unusual, for historically it is cities built along coastlines that have been start-up, trading and business hives. But two things have changed in the world in this century.

One, manufacturing is no longer the big growth driver in most countries, including India. Port cities are relevant when physical goods have to be imported and exported, not when the thing being traded is a service, and the product is digital, which can flow through fibre and cable.

Two, the world is awash with excess capital, thanks to the billions of dollars being generated by tech companies like Google, Facebook, Apple, Amazon and Microsoft, not to speak of Chinese tech giants like Tencent, Baidu and Alibaba. Even Indian tech giants like TCS and Infosys have thousands of crores in excess cash.

With billions of dollars now available for investment, the fundamental relationship between capital and entrepreneurship has changed. Earlier, entrepreneurs chased financiers and capital; now it is the other way around. And the capital coming in is 'patient capital' – investors are willing to wait for years to get a return. Huge loss-makers like Flipkart, Amazon India, Ola, Uber, Paytm, Oyo Rooms and Zomato are unicorns – companies with billion-dollar valuations or above despite not making a rupee in profit as yet.

The abundance of capital and the shift of business power from goods to services has reduced the relative importance of port-based metros as against land-locked ones. This is why megalopolises like Delhi-NCR and Bengaluru are boom towns, while Mumbai, Kolkata and Chennai are just about holding their own.

Mumbai may be the financial powerhouse and Maharashtra the manufacturing capital of India (the state accounts for 38 per cent of the country’s direct taxes collected), but its rate of growth is falling vis-a-vis Bengaluru and Karnataka.

A faster pace of tax growth indicates that incomes and wealth are growing quicker in Karnataka than in Maharashtra, and this is largely due to Bengaluru’s growing clout versus Mumbai’s relatively declining one.

To be sure, Maharashtra’s real future growth hub may be Pune, which is seeking to rival Bengaluru at some point. Mumbai’s predominance in the financial market will never be equalled by Bengaluru. But in an era where capital chases entrepreneurship, the money is flowing towards Bengaluru and Delhi, two cities that are driven by services rather than manufacturing and physical goods.

Bengaluru’s real battle is with Delhi, and here the fact that the national capital will always have an edge in terms of resources will matter. Bengaluru’s future will depend on making dramatic changes to the quality of the city’s infrastructure and city revenues. Intellectual and physical capital will move to where the infrastructure is best, but Bengaluru is unfortunately failing to do just that.

The BBMP has shown itself to be very poor in collecting revenues despite the rising income profiles of its residents. According to a study by Janaagraha Centre for Citizenship and Democracy, the variance between what the BBMP expects to collect as revenues and what it actually collects is huge.

It noted: “Since 2016-17, the budget variance between budget estimates (BE) and revised budget estimates (RE) averaged at 26 percent, while cities like Mumbai (9 percent), Chennai (15 percent), Ahmedabad (8 percent), and Surat (5 percent) recorded an average budget variance under 15 percent.” Translated, this means Bengaluru’s municipal entity is very poor at raising its revenue profile.

The key to making Bengaluru No 1 again in start-ups lies in urban renewal and infrastructure investment. Bengaluru needs freedom to manage its own transition from infrastructure-poor to infrastructure-rich. This calls for a sea change in how the city is administered and governed. It is a cash cow, but the money milked is going into containers other than those of the BBMP.