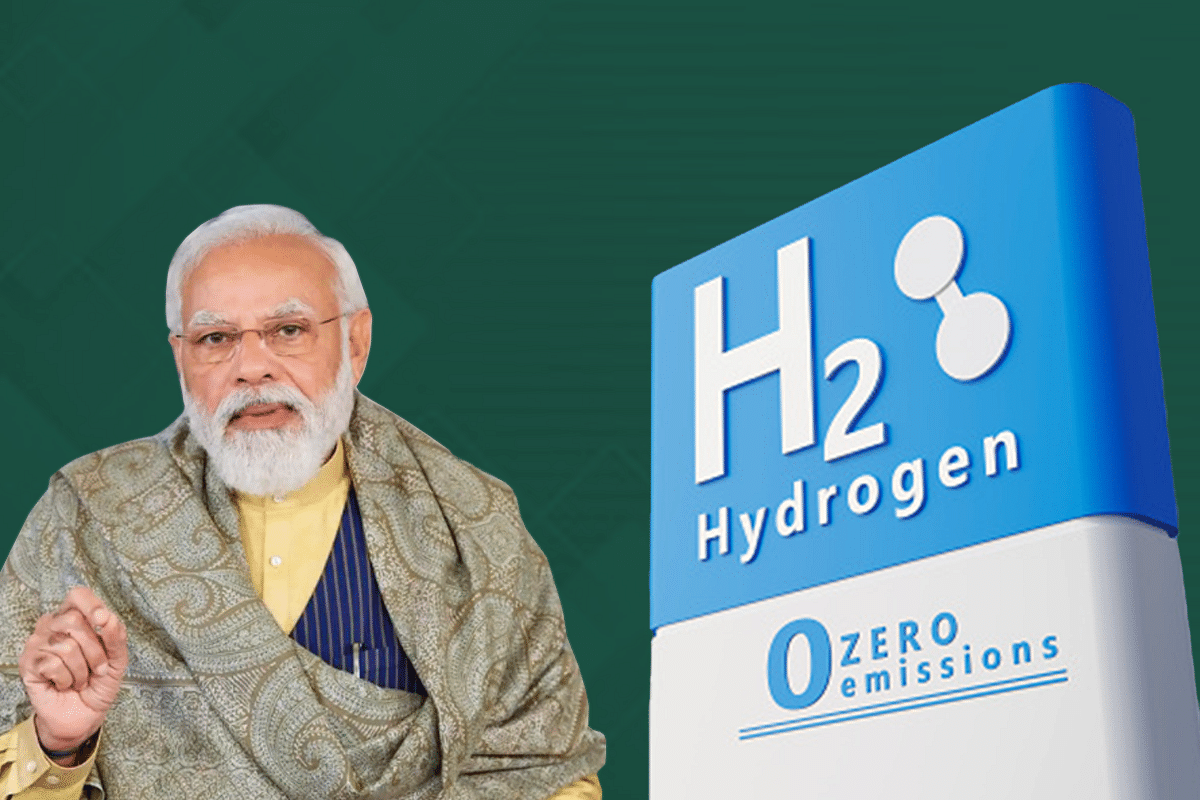 On 15 August 2021, Prime Minister Narendra Modi announced the launch of National Hydrogen Mission (NHM) with an aim to make India a global hub for green hydrogen production and export.

This would not only help India to make new progress in the field of energy self-reliance but will also become a new inspiration for Clean Energy Transition all over the world.

Accordingly, the Ministry of New and Renewable Energy (MNRE) has drafted a National Green Hydrogen Energy Mission document which would inter-alia aim to scale up Green Hydrogen production and utilisation across multiple sectors, including transportation. The draft Mission document is currently under inter-ministerial consultation.

On 27 January, Indian infrastructure and engineering behemoth Larsen & Toubro (L&T) announced that it is teaming up with Norway’s HydrogenPro to make gigawatt-scale green hydrogen electrolysers in India.

Under this agreement, L&T and HydrogenPro will jointly work towards setting up a joint venture in India for gigawatt-scale manufacturing of alkaline water electrolysers based on HydrogenPro technology for Indian market and other select geographies.

Norway-based HydrogenPro is a leading electrolyser technology and manufacturing company. The company is targeting a production cost for green hydrogen of $1.2 per kg in 2022.

A recent report published by Smahi Foundation of Policy and Research, a thinktank based in Bengaluru, provides a detailed perspective on how National Hydrogen Mission will help transition India to a green hydrogen economy.

The report argues that Green Hydrogen will help India achieve its emission goals of producing 450 GW of renewable energy by 2030, under the Paris Agreement and reduce import dependency on fossil fuels.

As the world seeks ways to accelerate the pace of transformation in the energy sector, India with the right policy support, is in a unique position to not only become self-sufficient in green hydrogen but also produce green hydrogen for export markets, the report recommends.

Hydrogen is a clean fuel and an efficient energy carrier. It is emerging as an important source of energy since it has zero carbon content in contrast to hydrocarbons which have net carbon content between 75 and 85 per cent. When burnt, Hydrogen produces water as a by-product and is, therefore, environmentally benign.

The energy content by weight for Hydrogen is 120.7 MJ/kg, which is the highest for any known fuel. However, it has the lowest energy content by volume which poses challenges with regard to its storage for civilian applications, when compared to storage of liquid fossil fuels.

Hydrogen has been used as a raw material and utility over a long period in the fertilizer, chemical and petroleum refining industries. The current applications mainly include industrial processes, semiconductor industry, rocket fuel, and spacecrafts. The top four single uses of Hydrogen today (in both pure and mixed forms) are shown in the image.

Hydrogen can be used as an energy carrier directly in internal combustion engines and turbines in place of fossil fuels or as blended mixture with fossil fuels. It can also be used in the fuel cells to generate electricity.

However, it has huge potential in transportation sector as a direct replacement to fossil fuels, as it is possible to store hydrogen on-board.

As per International Renewable Energy Agency (IRENA), Hydrogen shall make up 6 per cent of total energy consumption by 2050. The Hydrogen Council Report, 2021 also mentions that, global investments in hydrogen will constitute around 1.4 per cent of the total global energy funding by 2030.

In its 2019 technology report titled “The Future of Hydrogen”, International Energy Agency (IEA) has given seven-point recommendation encouraging establishment of a role for hydrogen in long-term energy strategies.

How is Hydrogen Generated?

Hydrogen (H2) is one of the most abundant elements available on earth. However, it is not found in elemental form. The richest source of hydrogen is water. Hydrogen is also found in organic compounds and fossil fuels like petroleum, natural gas, coal and biomass.

Hydrogen for commercial use is produced from catalytic steam reforming of natural gas, naphtha and other hydrocarbons, partial oxidation of hydrocarbons, gasification of coal and electrolysis of water.

According to the IEA, the current global demand for hydrogen is 70 million metric tons per year, more than 76 per cent of which is being produced from natural gas, 23 per cent comes from coal, and the remaining is produced from electrolysis of water. The high proportion of natural gas is due to its cheap prices, which leads to low cost for generation of hydrogen.

So what is Green Hydrogen?

The vast majority of industrial hydrogen is currently produced from natural gas through a conventional process known as steam methane reforming (SMR). The standard SMR process produces what is known as Grey Hydrogen and has the major disadvantage of releasing large quantities of by-product CO2 into the atmosphere - the main culprit for climate change.

Grey hydrogen has increasingly been produced also from coal, with significantly higher CO2 emissions per unit of hydrogen produced so much that it is often called brown or black hydrogen instead of grey.

Trend of Hydrogen Economy in India

India’s endeavour in hydrogen technologies dates back to 1976, when the Department of Science and Technology sponsored hydrogen projects in universities and technical institutes. As early as 2003, National Hydrogen Energy Board was formed, and in 2006 the Ministry of New and Renewable Energy laid out the National Hydrogen Energy Road Map identifying transport and power generation as two major green energy initiatives.

Currently, India consumes about 6 million metric tonnes of grey hydrogen per annum, which is about 8.5 per cent of the global hydrogen demand. A report published by The Energy and Resources Institute (TERI) anticipates the demand to reach 23 Mt in 2050.

High technology cost, risk of undesirable sunk cost, absence of dedicated government policy, and lack of public awareness have been significant barriers in front of India’s hydrogen economy. However, the recent policy developments portray India’s serious intentions in transitioning towards green hydrogen in the long term.

Green Hydrogen energy (GHE) is currently at a nascent stage of development, but has considerable potential for aiding the process of energy transition from hydrocarbons to renewables. Green hydrogen can help solve India’s twin problems - energy security and decarbonisation of its economy.

India is participating in Mission Innovation Challenge for clean hydrogen to accelerate the development of a global hydrogen market by identifying and overcoming key technology barriers to the production, distribution, storage, and use of hydrogen at a gigawatt scale. By 2050 India intends to produce three-fourths of its hydrogen from renewable resources.

The Mission Innovation (MI) is a global initiative of 22 countries and the European Commission (on behalf of the European Union) catalysing investment in research, development and demonstration to make clean energy affordable, attractive and accessible for all. Mission Innovation was launched during the twenty-first Conference of the Parties (COP 21) in November 2015, in presence of Prime Minister of India along with world leaders.

While the final draft of the Mission is yet to be unveiled, it is expected that the Mission would inter-alia create a framework for generating demand for green hydrogen in sectors such as petroleum refining and fertiliser production; support for indigenous manufacturing of critical technologies; research and development activities; and an enabling policy and regulatory framework.

Considering India’s 175 GW target of Renewable Energy capacity by 2022 and 450 GW by 2030, it is imperative that our energy mix involves other green technologies on a medium-to-long term basis. The Green Hydrogen Mission will also help India lower its emission intensity by 33-35 per cent from the 2005 levels by 2030, another Nationally-Determined Contribution (NDC) target under the Paris Agreement.

A recent report by Smahi Foundation of Policy and Research, Bengaluru-based think tank, argues that India, with the right policy support, is in a unique position to not only become self-sufficient in green hydrogen but also produce green hydrogen for export markets. It also argues that India can decarbonise its energy-intensive sectors such as industry, transport and power by using green hydrogen.