Is It A Little Too Early? Hyderabad Children Join Global School Strikes Against Climate Change 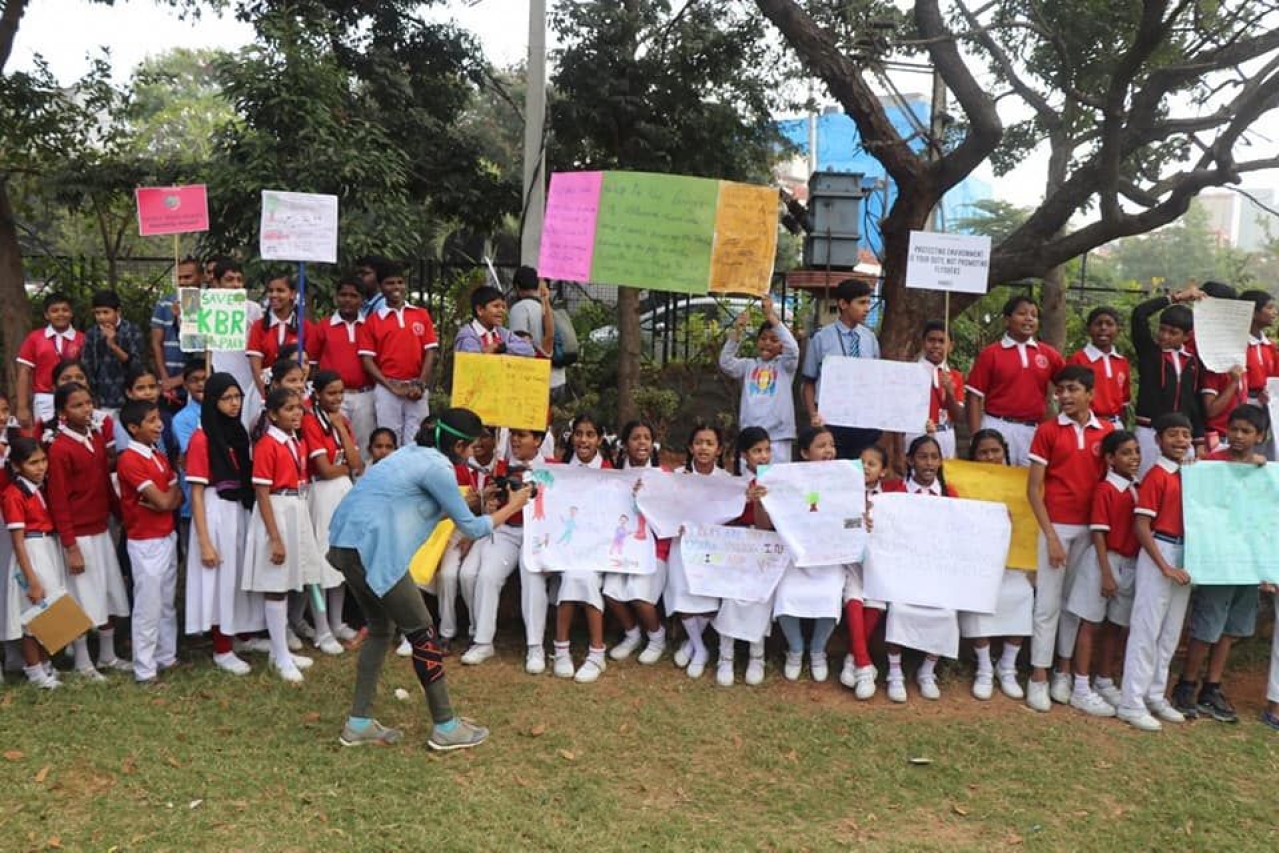 Schoolchildren in Hyderabad at the protest

“We want to make sure Hyderabad is on the global map,” Kajal Maheshwari told us in a tense and almost breathless voice. Maheshwari was rushing around to obtain police permission for an event that her citizens’ group wanted to organise on the 15 March as part of a global movement against climate change. Luckily for them, the Police Commissioner was cooperative, and by the evening of 12 March, the group `Citizens for Hyderabad’ was able to announce on social media their participation in the global movement.

The movement being referred to is the March 15 'protest against climate change inaction', with over one lakh children from hundreds of cities across the world in attendance. The number of students and cities/towns involved in the event made this the largest protest of its kind in the world.

The inspiration behind the school strikes is Greta Thunberg, a 15-year-old Swedish schoolgirl, founder of Fridays For The Future movement, who has been protesting every single Friday against government inaction over climate change . Greta has famously said, “We are not doing this for fun, but because we don’t have a choice”. She adds, “Our adults have failed us and we now need to take things in our own hands.”

In India, students from the National Capital Region and Hyderabad had joined the protest. The Hyderabad organisers were estimating around 1,000 children to participate in the event at the KBR (Kasu Brahmananda Reddy) National Park main gate. The slogans raised by the Hyderabad protestors read, “Political will in India is more inclined towards funding projects for elections rather than long-term sustainability. This has to change.” Others said, “The future of our planet is looking really bleak, and all the politicians are asleep. We have to wake them up, and I think thousands of kids on the street will do just that.”

With police permission for the protest having been obtained on the afternoon of 13 March, Hyderabad did get ‘included’ in the global map. `Citizens for Hyderabad’ were thrilled and “proud to be officially with the youth of the world against climate change”.

This event was useful for Hyderabad citizens to voice their concerns regarding the “lopsided and reckless development of the city”, as Arpit Sharma, a Teach-for-India Fellow at an underprivileged school put it. Sharma is part of the citizens’ group and his school is in the vicinity of KBR, where the strike took place.

There have been “Save KBR” protests from time to time to “protect Hyderabad’s largest lung space” which is in the heart of the city. The state government had, for the facilitation of the SRDP, decided to revise the Eco-sensitive Zone (ESZ) status to between 3 metres and 29.8 metres, from the current 25-35 metres. Following protests by environmentalists, the project was stalled and the issue put up before the National Green Tribunal, which gave the go-ahead after providing directions for the demarcation of the ESZ.

The reduced ESZ area is not acceptable to the environmentalists. “The National Park needs to be treated as a heritage site for preservation of biodiversity of Telangana. The park also plays a crucial role in replenishing the groundwater table and acts as a lung space and a carbon sink,” they say. Citizens insist that they have not been included in the decision-making for something which will ultimately impact them and the generations to come. In December 2018, a huge uproar by citizens’ groups had taken place, and the protests began gathering momentum.

Strictly speaking, everything was in order as per the rule-book, but because of the protests by the citizens, the project had gone into cold storage. This also meant the GHMC (Greater Hyderabad Municipal Corporation) got into a tricky situation with the contracting agency.

A Twist In The Tale?

While all the planning for the protest on 15 March was going on, there was a twist on the afternoon of 14 March in the form of a directive by the ESZ committee of the Ministry of Environment and Forests (MoEF).

It asked the state government to conduct a public hearing over the acceptability of the draft notification of KBR Park’s ESZ, and submit a detailed report before embarking on the demarcation process. Hence, the final view will now take into consideration public opinion, just as the environment activists were seeking.

But that did not mean the protest would have been called off. “No, we will protest for climate change in general and other causes in the country like the Banerghatta National Park in Bangalore. And then there are other national parks in Telangana also,” informed an activist.

Be Careful What You Ask For, Lest It Is Granted!

After talking to some of the citizen activists, we got the impression that they were unaware of some facts related to the KBR Park. They admitted that they had not gone deep into the issue themselves.

The NGT (National Green Tribunal) Study in 2017, that had been taken up suo motu had made some valid points in favour of going ahead with the SRDP.

The first was regarding pollution and emissions. The NGT had found that pollution would actually come down, were the flyovers to be constructed as per the SRDP.

Because of heavy vehicular movement and severe traffic congestion at the road junctions, the existing emission load around the KBR Park is 107.92 tonnes of carbon dioxide-equivalent per day. If the traffic congestion is eased, the emission levels will come down to 47.65 tonnes of carbon dioxide-equivalent per day. This amounts to a reduction of about 56 per cent.

Further, the CTS also calculated that there will be a saving of 40.59 crore litres of fuel over a period of 20 years from 2015 to 2035. About 32,096 litres of fuel is wasted every day due to keeping the vehicle engine in idling condition and driving at low speeds. This is equivalent to a cumulative reduction of emission of 13.66 lakh tonnes of carbon dioxide.

The second point was about felling trees. The NGT found three things – one, that the species which were permitted to be felled are either ornamental or shade bearing trees; two, the trees permitted are located outside the boundary of the park, and three, that most of them are planted about 15 years ago by the HMDA (Hyderabad Metropolitan Development Authority). NGT found that “It is not correct to say that the cutting of trees will affect the National Park – no tree growth existing in the National Park is either required or permitted to be cut”.

Further, they estimated that the effect on carbon sequestration on account of felling of 1,394 trees was 76.05 tonnes. But this loss of trees could be compensated by taking up compensatory afforestation by planting trees equivalent to three times the number of trees, and the planting of 100-400 trees in the properties owned by the GHMC in 17 places was already planned.

Three, while admitting that there would be temporary green cover, the NGT lamented the lack of other options to ease traffic in the road network in that area, which connects important arterial roads leading to newly developing and densely-populated IT, financial and industrial corridors.

The NGT report also mentions that literature shows that the impact of the flyover construction to curb traffic congestion problem has been assessed across the world in terms of traffic decongestion, time saving, fuel saving and emission reduction and the result was always positive.

Hence, for Hyderabad in particular, as demonstrated by the CTS report and data, the project helps in minimising vehicular emissions and prevents further deterioration of ambient air quality in the surroundings. And so “the project is definitely eco-friendly and benefits far outweigh the loss of few hundred trees”.

And finally, the notification declaring it as a national park around two decades ago, had already earmarked an area of 13.80 ha for widening of the road system around the park. This is because this park is located in the heart of the city “and subjected to severe anthropogenic pressure mainly with the heavy movement of traffic round the clock”. “This is not a National Park or Wildlife Sanctuary located in the wild but it lies in a thickly populated human habitation in a burgeoning Metropolitan city”.

Indeed, Hyderabad city is expanding rapidly with a phenomenal increase in population and density of vehicles, and there is a consequent pressure on all utility services like transport, water supply, education, health, etc. GHMC, after exploring various alternatives, concluded that there was no alternative except either to construct elevated expressway or multi-level flyovers.

The citizens’ groups would do well to ponder on the above points. Importantly, the central government is being fair and inviting their views towards citizen-centric development. It behoves them to demonstrate their sense of responsibility, too.

The Ethics Of Using Children As The Medium

In the context of `responsibility’, it may also be prudent to reconsider aligning with the context – the global movement the ‘students’ strike’.

It is true that urban movements have become a norm in many fights against infrastructure growth that urbanisation necessarily involves. However, involving children in such movements is to tread on risky territory. Like an activist told us, “I used to go to KBR regularly and take children from my school also, and we were attached to the space. In December, the children participated for the first time in the protest”.

The Greta Thunberg-movement is useful to create impact, where children can be `rightfully’ involved, since it is supposedly a world children’s movement. But how is it a children’s movement anymore if children are motivated, rather, instigated by adults?

Also, the global strikes as well as their founder, Greta, has come in for criticism from several quarters that have questioned a 16-year-old’s competence in passing judgement on such a serious topic as climate change by making only sweeping and unsubstantiated statements about “adults and government inaction”. They allege that she is being exploited by vested interests.

Crucially, her route of taking action through 'protests' is questioned by arguing that it teaches children to “denigrate law and government” and “sell rebellion as a virtue”.

A Class VII student of one of the participating schools, enthusiastically said, “We want to save the environment. I haven’t really planned what I want to be when I grow up, but after this experience, maybe this is what I will do!” The glory and visibility from being part of such a movement is thrilling.

Indian children have remained insulated so far from any disruptive thinking. They need to be brought up by the community with discipline and on a strong foundation of facts and scientific enquiry first, to be able to grow up into discerning adults. For that they need good role models.

As stakeholders in society and development, just as in environment, all citizens’ groups should necessarily be involved in decision-making. But with their judgements based on facts and grounded in a sense of responsibility.

Get Swarajya in your inbox everyday. Subscribe here.
Tags:
38 Shares