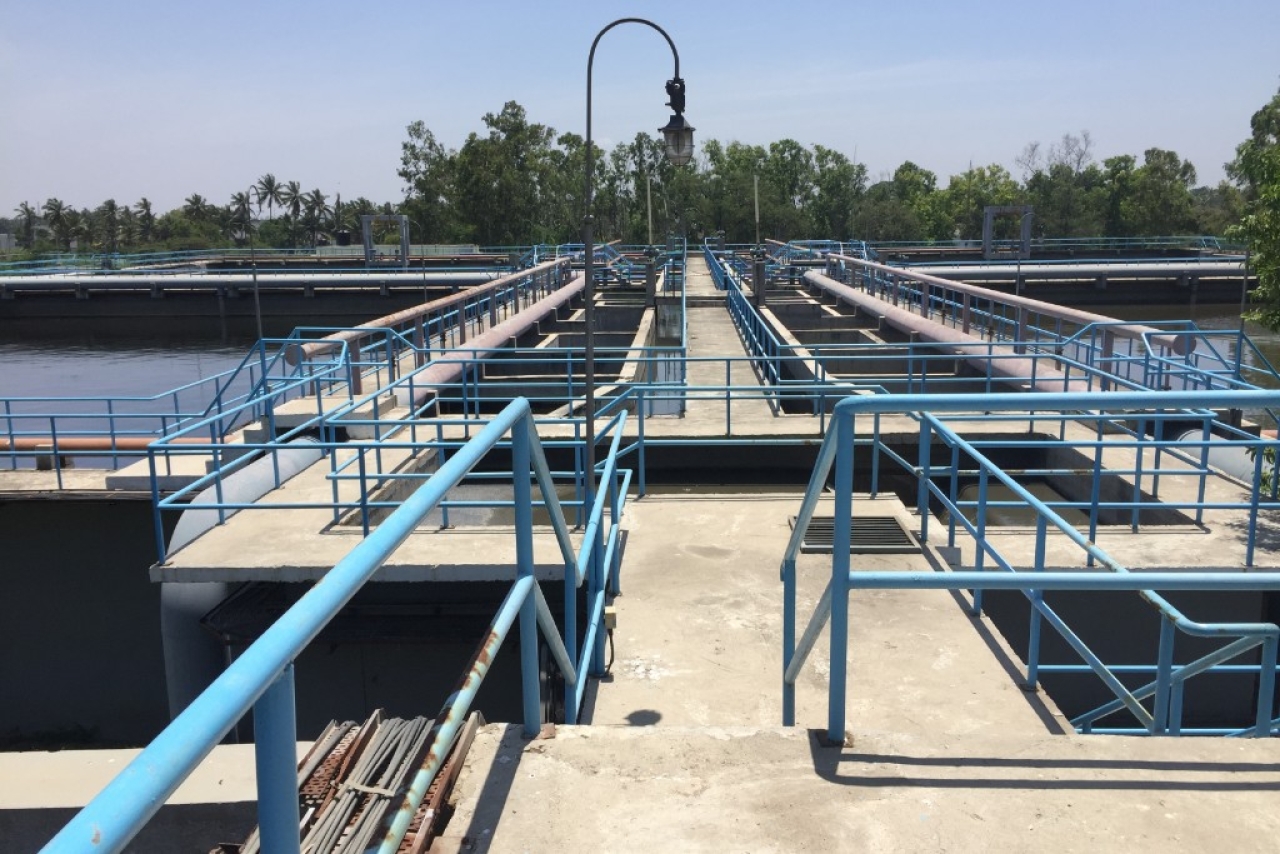 The sewage treatment plant at Ukkadam.

There is an ambitious initiative to ‘drive underground’ the open drainage system in most parts of Coimbatore with a flurry of underground drainage (UGD) and sewage treatment plant (STP) projects getting off the ground.

The city is home to approximately 1.89 million people that according to environmentalist K Mohan Raj generate 2 million litres a day (MLD) of sewage. With just a single functional sewage treatment plant of 60 MLD installed capacity to process the waste, how is the city’s municipal corporation preparing to address the challenges of sewage management for Coimbatore which is working towards the smart city goals?

Coimbatore’s Corporation Commissioner and Special Officer, Dr K Vijayakarthikeyan, told Swarajya that work on building UGD and STPs has been undertaken simultaneously in various parts of the city with a plan to take forward house service connections (HSC) – where individual sewage pipes from home are connected to the main sewer.

To find out more, Swarajya visited the colonial-style corporation building in the heart of the city. It took a few hours of wait to meet senior engineer A Lakshmanan at the wooden-panelled suites of the Jawaharlal Nehru National Urban Renewal Mission (JNNURM) department.

With a capacity to treat 60 million MLD of sewage, the Ukkadam plant in the south of the city, is located on a sprawling 13.1-acre campus with room for more greenery. Built under the JNNURM project, the plant has been serving parts of south Coimbatore. It will soon be assisted by two others. One will be the 40 MLD Nanjundapuram plant, which is showing signs of emerging from a long-standing legal wrangle. The other will be the 60 MLD Ondipudur facility that has been commissioned and is now being put through trial runs, but not before the authorities had obtained delayed permission of the National Highways Authority of India to traverse the highway to facilitate construction of underground sewer lines as part of the project. Together, the plants will serve 60 wards of south Coimbatore. 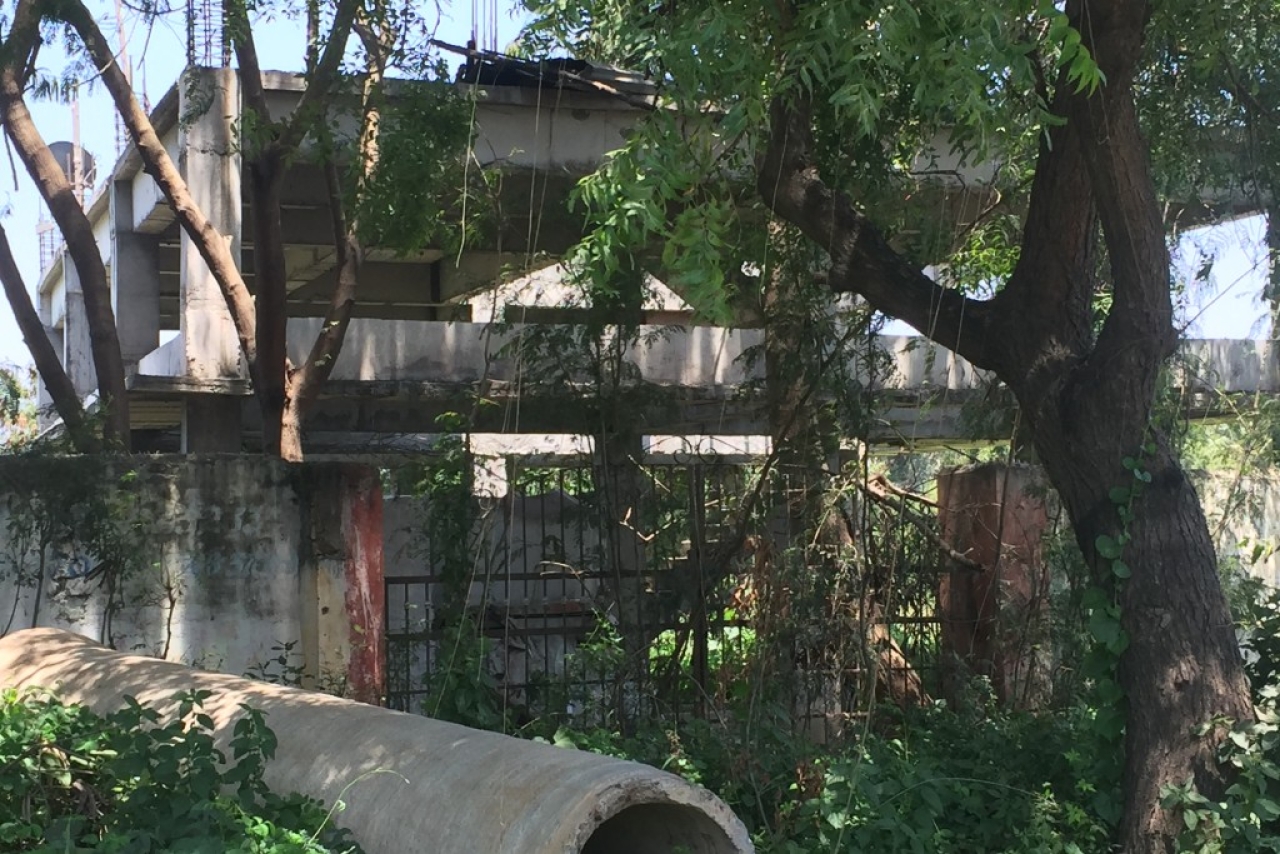 The Nanjundapuram STP surrounded by overgrowth.

However, the corporation’s efforts at addressing the inadequacies of STPs have not been easy with Nanjundapuram and Ondipudur projects running into roadblocks. Pitted against the gated community, Mayflower Shakthi Garden Owners’ Association in Najundapuram, and Parsn Senior Citizens’ Group, the corporation has been engaged in a 10-year-long legal battle to get the plant off the ground.

However, it has now floated a Rs 43.60 crore tender inviting bids to restart the plant, after fending off charges that the ‘buffer zone’ criterion has not been met. The tender, which is for constructing, erecting and commissioning the plant followed by five years of operation and maintenance, would also facilitate installation of house service connections for residents of 20 wards, thanks to the underground drainage scheme.

The residents, who had approached the Tamil Nadu Pollution Control Board, Madras High Court and the National Green Tribunal to air their grievances, say they are worried that the plant’s proximity (located across the road) to their campus can cause serious health hazards.

Mayflower Sakthi Garden Owners’ Association president S Balamurali said, “the corporation has violated norms relating to the mandatory distance between the plant and the residential compound, which can contribute to groundwater contamination and persistent noise pollution.”

The corporation maintains that the residents are fighting off the project for reasons best known to them. Saying that the Mayflower residents’ fears are baseless, Lakshmanan vouched for the technology that ensures proper functioning of STP plants, complete with stringent safety measures. “See for yourself the operations of the Ukkadam plant, especially the crystal clear water obtained at the end of one full cycle of treatment,” he said.

So, the next stop was the automated Ukkadam STP, which was located about half a kilometre from the main road. The muffled boom of the blower, housed in the acoustically designed room, is what greets a visitor to the largest sewage treatment plant in Coimbatore. Accompanied by two engineers from the Coimbatore Municipal Corporation, the writer, who was expecting to catch the unmistakable odour of sewage, was surprised to find that it was totally absent during most part of the tour.

Run by the most common and reliable cyclic activated sludge technology, the STP uses sequencing batch reactors (SBR) to clean the incoming sewage. “There are no chemicals used as it is commonly believed,” said one of the engineers, as we toured the enormous, segregated basins where the processes of fill, aeration, settling and decanting take place, putting the effluent through six cycles.

Aeration technology is key, where air/oxygen is pumped into the wastewater for bio degradation of sewage, which explains the use of just .22 to .5 parts per million (PPM) of residual chlorine at the final stage. Blowers generate additional airflow enhancing the potential of the aeration energy. 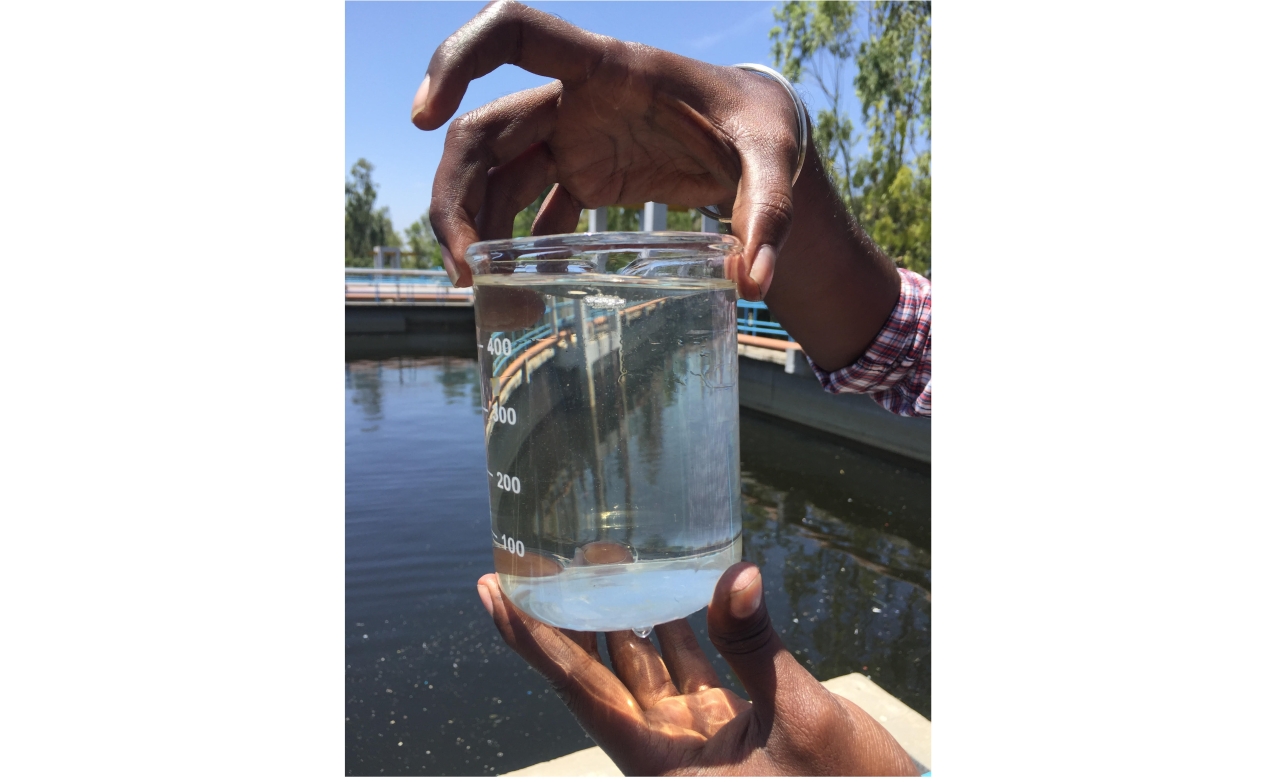 A sample of the treated effluent

Constantly monitored by SCADA (Supervisory Control and Data Acquisition) software, “any fault or sluggishness can be quickly detected and rectified.”

Meanwhile, a proposal to generate revenue by selling treated water to corporate houses and farmers is taking off, said Lakshmanan. “The Golf Course has agreed to buy .3 MLD of treated water, and a letter of acceptance has been signed in this regard.” The engineer said that the treated water will collect in a tank from where it will be transported by the buyer for irrigation purposes.

"Using recycled water will save valuable resource, but the proposition has had a slow start as transporting water from the collection unit requires infrastructural support,” he said.

“There is no dearth of groundwater, so everyone is happy spending it, rather than taking the trouble to transport recycled water.”

He said, the water used for irrigation will in turn recharge groundwater, and even if the takers are few, the surplus that flows into the Noyyal river, which has been a depository of sludge, is clean. “This is an achievement in itself.”

A corporation source said that farmers around that area and residents are also helping themselves to the water that collects in the tank to irrigate fields and water their plants.

Elaborating on the plans for setting up a much-needed sewage infrastructure for the city, Commissioner Vijayakarthikeyan said: “we are targeting uncovered (open drainage) areas in the city, especially in Ukkadam, and contracts for setting up several underground drainage connections have been tendered,” he said.

According to him, STP projects, with a share of approximately Rs 139 crore of the funding for infrastructure development, are now planned for other zones, which would be implemented by Tamil Nadu Water Supply and Drainage Board on behalf of the corporation under Atal Mission for Rejuvenation and Urban Transformation (AMRUT) scheme.

“An innovative idea to ease sewage disposal and collection is being conceived,” the commissioner said. The novel plan, though challenging, would be to take the house service connections a step forward, he said. Currently, sewage waste from individual septic tanks is being collected by the corporation periodically and transported to the main sewage network. The project, the costs of which will be borne by the corporation, is to install pipes at individual homes which would be connected to the public sewer, enabling a daily outflow of effluent, saving time and ensuring hygiene.

“More, yes, but mini STPs,” says environmentalist Mohan Raj. This is to distribute the ‘impact’ the residents living around these plants are exposed to, he said.

Suggesting that the idea of treating effluent at origin must be looked into, Mohan Raj said, “this measure will help reduce the burden on STPs, and minimise the ‘pollution’, ‘odour’ and ‘noise’ threats”.

Also, to cut the STP’s workload of processing large volumes of water, the bath/kitchen wastewater can be segregated, stored in tanks and used for gardens in individual houses and gated communities.

Citing incidents in neighbouring Tirupur, Mohan Raj said the hazards associated with the STPs cannot be downplayed, especially, when they are large capacity plants. “A malfunction even of short duration can cause heavy damage to resources.”

He said most of the plants don’t work to their full capacity, and only if they do, would we know if they can pass the test the stakeholders are claiming they can.

Meanwhile, the corporation has its task cut out to manage the monumental challenge of the ever growing solid and sewage waste. So, while addressing the exasperating sanitation situation, it would be unmindful of those who cry foul, or perhaps, toe a fine line between demanding citizens and the crisis.