KCR Is Crushing The Telangana Bus Strike, 50,000 Employees Worry About Their Future 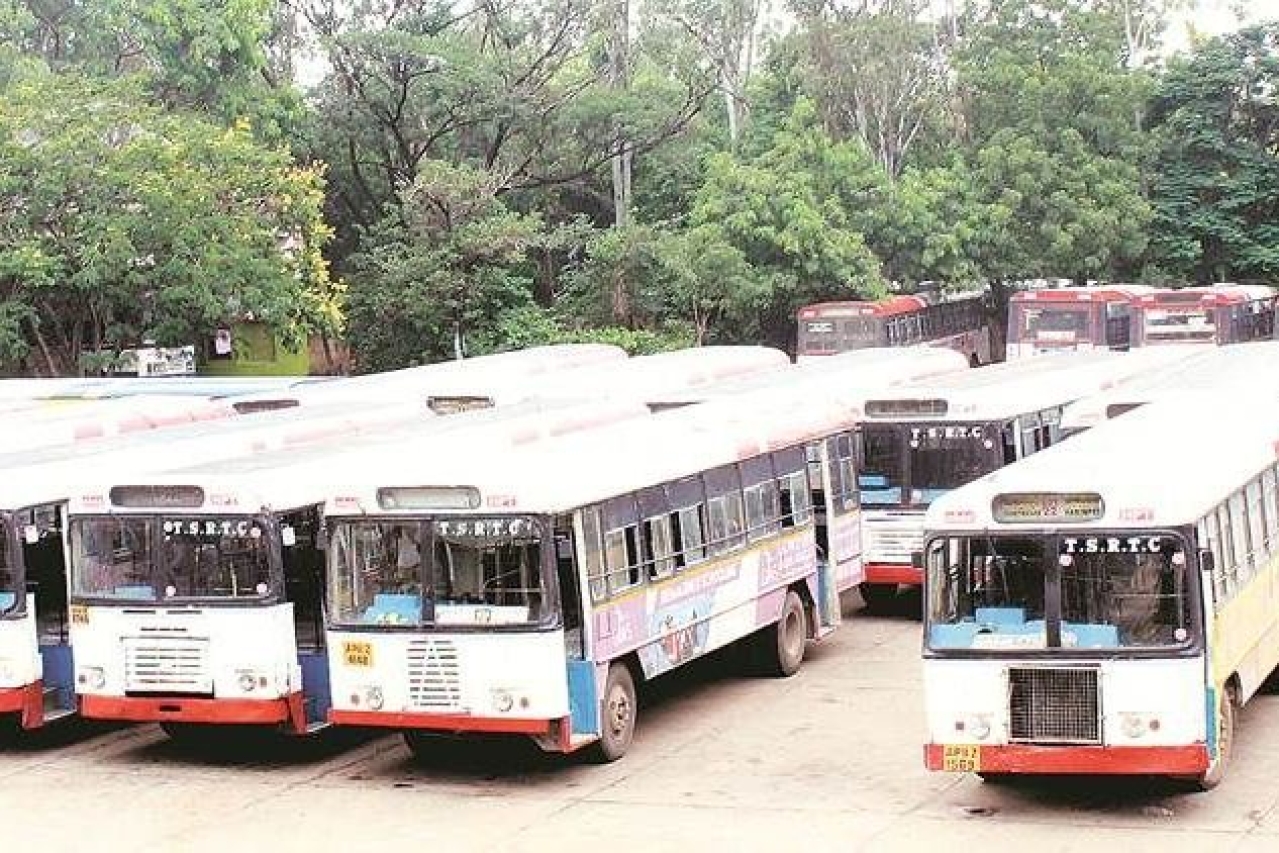 TSRTC buses lined up at the depot during the strike.

The indefinite strike by the Telangana State Road Transport Corporation (TSRTC) employees, which began on 5 October this year, is showing no signs of ending soon.

TSRTC employees have been on strike demanding that their corporation should be taken over by the state government since it is bleeding. The TSRTC recorded a loss of Rs 984 crore during the 2018-19 financial year, while the employee unions say that the losses run to over Rs 1,100 crore every year.

The TSRTC workers have also been demanding filling up various vacancies and a wage hike that is due since 2017. Other problems of the transport corporation are an aging fleet, lack of human resources, inefficiency and competition from private operators.

The JAC has been insisting that the K Chandrasekhar Rao government in the state hold talks with them to end the stalemate. At least three TSRTC employees have committed suicide as the strike has aggravated their financial problems.

The Telangana Rashtra Samiti (TRS)-headed government has given an ultimatum at least twice — 5 November was the latest — to the workers to resume work but in vain.

But much to the chagrin of the state government, hardly 500 of the nearly 50,000 workers have heeded to the warnings.

Even as the strike continues, the transport corporation’s dues are mounting. It has to now pay an additional Rs 453 crore to the state transport department as motor vehicle tax.

Besides, the corporation has been asked by the high court to pay within six weeks Rs 200 crore to the transport employees’ welfare society. The TSRTC had exhausted the funds of the society.

The transport strike for over a month now has affected commuters badly, particularly students who are dependent on public transport. In view of the strike, only skeletal services are being operated, while remote and interior areas have been ignored.

The transport employees went on strike after the workers union fell out with the TRS, which had drawn on the workers’ strength during its agitation for a separate Telangana state.

During the agitation, the TRS and Chandrasekhar Rao had promised to meet their demands and aspirations if they came to power.

According to Telangana Mazdoor Union working president, Thomas Reddy, not a single promise made by TRS and Rao has been fulfilled yet.

The TSRTC agitation was sparked by the Andhra Pradesh government decision to take over the AP State Road Transport Corporation.

A huge financial drain for TSRTC is that it pays Rs 365 crore as interest alone every year. Besides, the transport corporation shoulders some of the subsidy elements for the state government like ferrying students and senior citizens free or at concessional rates.

For meeting these commitments of the government, the TSRTC has got only a paltry Rs 114 crore from the state. The Chandrasekhar Rao government owes Rs 2,100 crore to the transport corporation.

The employees’ woes have been compounded by late payment of salaries, while the transport corporation is not getting any subsidy for diesel. TSRTC will have to spend an additional Rs 25 crore a day for every Re 1 hike in the price of a litre of diesel.

The transport corporation employees strike was not an out-of-the-blue decision. The employees’ union had given notice to the state government early in September, informing clearly that they would resort to strike if their 27-point charter of demands are not met.

The state government has assumed that the employees would not go on strike as on earlier occasions in 2016, 2017 and 2018, they didn’t go ahead with their threat of agitation.

This time, the employees were also angered over the state government calling them for talks only on 3 October, two days before their scheduled strike was to start.

The state government also earned the wrath of the employees by taking a firm stand as soon as the strike was launched. Chief Minister Rao directed the TSRTC employees to report for work on 6 October or consider that they have dismissed themselves from their jobs.

He rubbed more salt into their wounds by telling the media on 7 October that TSRTC strength was only 1,200 then. By this, he implied that the rest of the 48,000-odd employees had lost their jobs.

He further pointed out that the employees had left their jobs on their own. State Governor Tamilisai Soundarrajan’s attempts to find a solution have not yielded any result.

On its part, the state government has tried to complicate the issue by deciding to privatise 5,100 permits of the transport corporation. A public interest litigation has been filed against the move in the Telangana High Court, saying the due process of law had not been followed.

The Telangana government has hired some drivers, too, to run the TSRTC buses and is operating a couple of thousand buses. But these aren’t able to fill the huge demand.

Get Swarajya in your inbox everyday. Subscribe here.
Tags:
27 Shares