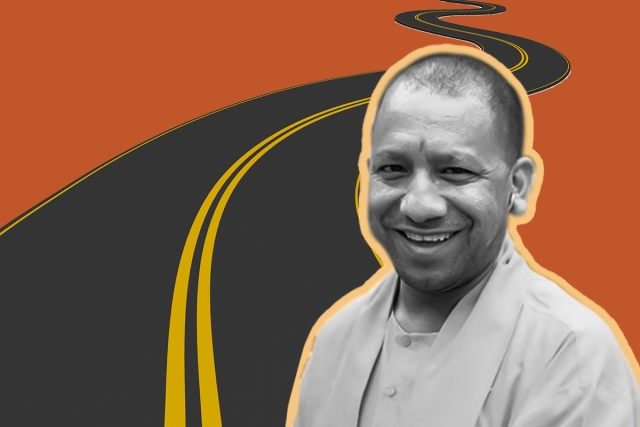 Four years into his first term as Chief Minister of India’s most populous state, the English media remains as hostile and prejudiced against Yogi Adityanath as it was in 2017.

His record as Chief Minister is seldom discussed. And when it is, facts are conveniently ignored to reach a preconceived notion.

The most recent example of this was the claim that Adityanath has done little to improve Uttar Pradesh’s infrastructure over the past four years.

In a video on the portal’s YouTube channel, ThePrint’s associate editor Ruhi Tewari claimed that Adityanath, unlike his predecessors Akhilesh Yadav and Mayawati, doesn’t have anything to show for as achievement on infrastructure.

“If you look at Adityanath’s tenure, there’s not much that stands out in terms of infrastructure creation, in terms of big tangible projects, nothing to show for unlike his predecessors, Mayawati and Akhilesh Yadav, who did create these expressways, these parks, which became a symbol of what they did during their tenure,” she says.

Nothing can be further away from the truth than this claim when it comes to Adityanath’s record on infrastructure over the past four years.

When he came to power in 2017, Uttar Pradesh had two functional expressways — the 165 kilometre long Yamuna Expressway, which links Agra with the National Capital Region, and the Lucknow-Agra Expressway, stretching 302 km. These projects, taken up by two governments, were completed over a period of 10 years between 2007 and 2017.

But when it completes five years in office in 2022, the Adityanath government would have finished work on three expressways — the 340 km long Purvanchal Expressway, the 296 km long Bundelkhand Expressway and the 91 km long Gorakhpur Link Expressway. Work on the state’s sixth and longest, the 594 km long Ganga Expressway, is likely to have begun by then.

For the record, the Purvanchal Expressway, which links Lucknow to Ghazipur, was conceived under the Samajwadi Party government led by Akhilesh Yadav, which had also built the Agra-Lucknow Expressway. However, it was mostly a project on paper when the Samajwadi Party lost power to the Bharatiya Janata Party in 2017.

Construction of the expressway began only in the third quarter of 2018 and nearly 80 per cent of the work has already been completed.

The main carriageway of the expressway is likely to be opened for traffic in April this year, less than three years after construction began.

Unlike Mayawati and Yadav, Adityanath has not remained fixated on one project. In fact, UP under Adityanath is building the longest expressway network in the country.

Two more expressways, the 91 km long Gorakhpur Link Expressway and the 290 km Bundelkhand Expressway, are also under construction in the state, and are likely to be operational before the 2022 assembly election.

The Ganga Expressway, envisioned by the Mayawati government, was struck down by the High Court due to environmental concerns.

While the Akhilesh Yadav government kept the project in the cold storage to focus on the Agra-Lucknow expressway, which passes through Samajwadi Party strongholds like Etawah and Kannauj, the project was revived by Adityanath last year with a new alignment to address environmental concerns.

Land acquisition for the Ganga Expressway has already begun.

“The Chief Minister is very clear that expressways will bring a complete change in the infrastructure status of the state. They will open up the backward areas for industry, and improve connectivity. He has stressed on the importance of expressways repeatedly,” Awanish Awasthi, the Chief Executive Officer of the Uttar Pradesh Expressways Industrial Development Authority, told Swarajya in December.

“If you want to bring industrialisation in a large state like UP, you need to have expressways so that connectivity to the areas concerned is good. For example, no industry will go to Bundelkhand unless there is good connectivity.”

“If someone can travel to Chitrakoot from Delhi in five and a half hours, why wouldn’t he go there, spend time as a tourist and come back? If going to Chitrakoot from Delhi takes nine hours, then the person going there has to plan for three days — one day for going, one day for seeing the place and one for the return journey. That, generally, people will not accept. That’s why we have gone for expressways,” Awasthi says.

By the time Adityanath ends his current five-year term, he would have delivered more on expressways than not only his predecessors but possibly any other chief minister in the country. When all the expressways that UP is working on are complete, almost every second district of the state will have an expressway passing through it.

The Adityanath government is also working on other ambitious projects, like the Jewar International Airport and the UP Defence Corridor, with the Centre.

The first phase of land acquisition for the Jewar airport, which had been in the cold storage since it was proposed in 2001, has already been completed. A concession agreement for designing, building and operating the Noida International Airport has been signed with Switzerland-based Zurich Airport International. Rs 2,000 crore had been allocated in the 2020 budget for the project.

When complete, the Jewar airport will be the country’s largest.

The UP government has been focusing on developing Ayodhya and other tirthas in the state, such as Mathura, as major revenue-generating tourism centres.

Within the city, multiple other existing facilities and tourist attractions, including the city’s bus station and the ghats along the Sarayu River, are being revamped. A 1,200-acre area in the town will be developed as ‘Smart Ayodhya’.

How Yogi’s Infra Drive Is Making Ayodhya More Accessible For Tourists
Yogi Adityanath Doubles Down On His Infrastructure Push
UP Is Building The Longest Expressway Network In The Country. Meet Awanish Awasthi, The Man Steering This Mega Project To The Finish Line