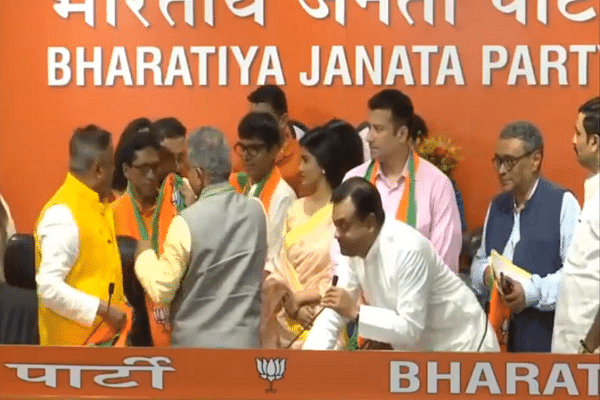 The joining ceremony for the 12 actors in New Delhi. (@BJP4India/Twitter)

In another boost to the Bharatiya Janata Party (BJP) in West Bengal, 12 well known actors from the Bengali film and television industry have joined the party, including actress Parno Mitra, reports Financial Express. They were welcomed as members of the party in a ceremony held at the party’s national headquarters in New Delhi.

A number of important party leaders and functionaries were present for the occasion, among them West Bengal BJP’s president Dilip Ghosh and senior leader from the state Mukul Roy. BJP spokesperson Sambit Patra was also present.

Rishi Kaushik, Kanchana Moitra, Rupanjana Mitra and Biswajit Ganguly are some of the other well known figures who were among the new joinees. On the occasion of the 12 actors joining the party, Ghosh praised the leadership of Prime Minister Narendra Modi and remarked how it had inspired the people of West Bengal.

He added that the party had to hold joining ceremonies for eminent persons outside West Bengal because of the risk associated with becoming BJP members as Trinamool had been harassing people doing so.