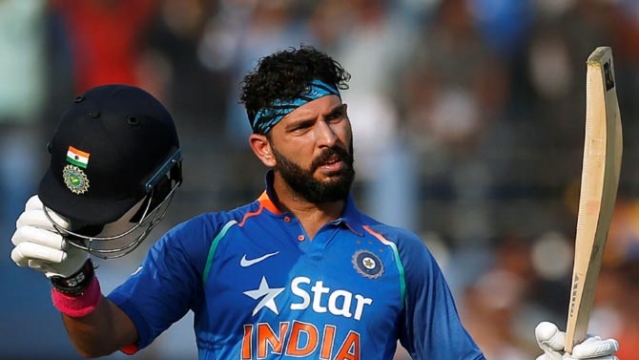 Yuvraj Singh opened his innings for India against Kenya in 2000. Since then, he has represented the men in Blue in all formats. (@CVShinde07/Twitter)

All-rounder Yuvraj Singh, famous for his six-sixes against England in the ICC Cricket T20 World Cup 2007, and his performance which led India to regain the ICC Cricket World Cup, has announced his retirement from all formats of the game.

“After 25 years in and around the 22 yards and almost 17 years of international cricket on and off, I have decided to move on. This game taught me how to fight, how to fall, to dust off, to get up again and move forward,” the Times of India quotes 37-year-old saying in a press conference today (10 June) in Mumbai.

Yuvraj Singh opened his innings for India against Kenya in 2000. Since then, he has represented the men in Blue in all formats. The left-hander from Chandigarh played 40 tests, 304 ODIs and 58 T20Is scoring over 11,000 runs and picking 148 wickets.

“I was extremely lucky to play 400 games for India. I could have never imagined it when I first started playing cricket,” Yuvraj said.

“It was a love-hate relationship with this game. I can't explain what it really means to me. This game taught me to fight. I have failed more times than I succeeded and I will never give up,” he adds.

The 2011 world cup player of the tournament is a fighter both on and off the field. The son of former cricketer Yograj Singh defeated cancer in 2011-12 and returned to represent the national cricket team.