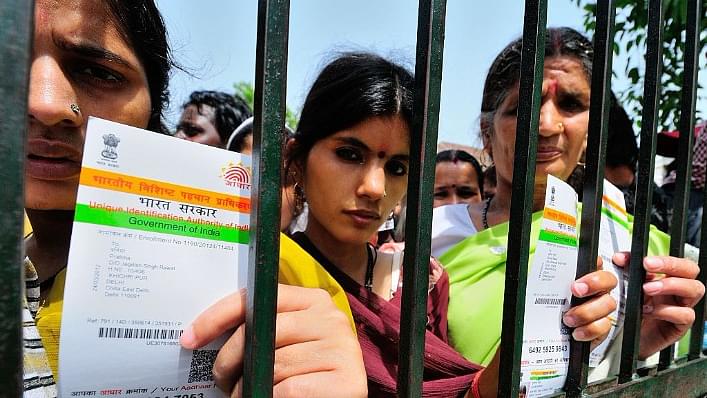 The Aadhaar system has given digital identities to more than 1.1 billion Indians. (Priyanka Parashar/Mint via Getty Images)

Following months of uproar over Aadhaar, the world’s largest biometric identification (ID) system, the Supreme Court on Wednesday (17 January) began hearing pleas against the legality of the unique identifiers for citizens.

A total of 29 petitions against the ID system have been identified by the court to be heard by a five-member bench, including Chief Justice of India Dipak Misra, as reported by Mint.

The government has been trying to utilise Aadhaar data to streamline the various social services it provides to the citizens, and to rein in leaks and corruption that plague the way these services are delivered to the people, among others.

Aadhaar’s legality has been questioned in recent times with the opposition claiming that the unique IDs can be used to monitor the citizens and can be used to infringe upon their rights and liberties.

Lawyer Shyam Diwan, arguing against the system, said, “The petitioners are certain that if the Aadhaar Act and programme is allowed to operate unimpeded, it will hollow out the Constitution, particularly the great rights and liberties it assures to citizens.”

On the bench’s enquiry about the government’s stand that the system would help citizens benefit from the welfare schemes better as the money would reach them directly was correct, Divan said the government numbers of the benefits were inflated.

Divan stressed over the illegality of biometric data collection by the government saying, “Can my body be used as a marker in a government programme?”

To this, the bench wondered if Aadhaar could be considered safe if the biometric information was used only for the purpose for which it was collected. “Why can’t the state say it is a valid state interest to ensure that social benefits reach the right hands through the programme,” Justice Chandrachud asked.

Divan said he would address this issue in detail at a later stage. The arguments over the system were in motion today (18 January).