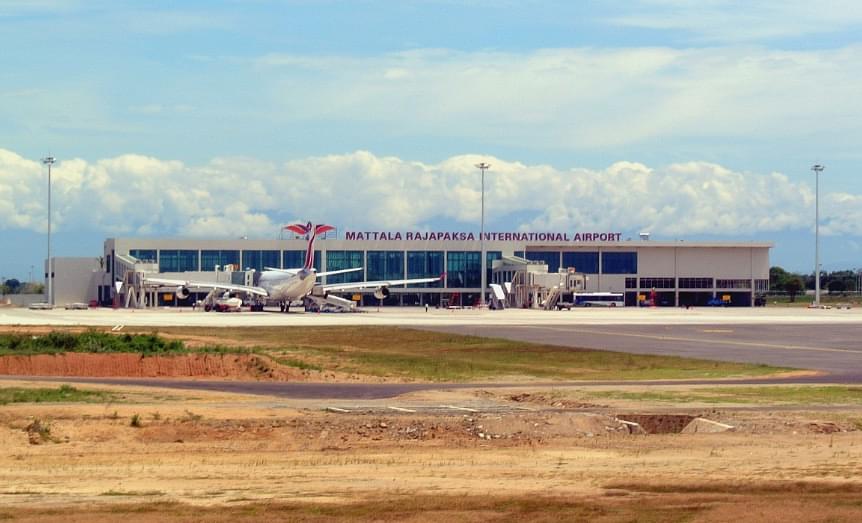 The Mattala Rajapaksa Internation Airport, as seen in 2013 (Adbar/Wikimedia Commons)

Less than a week after it announced the relocation of a naval unit from Galle to Hambantota, Sri Lanka has announced that it has formed a joint venture (JV) with India as the majority partner to operate the perennially loss-making Mattala Rajapaksa International Airport in Hambantota. Both the port and airport were built by the Chinese under former president Mahinda Rajapaksa’s tenure.

Dubbed the “world’s emptiest airport”, the $210 million dollar airport has no scheduled flights with several major carriers including Flydubai and Air Arabia pulling out citing the route as uneconomical. Air Arabia withdrew its flights to Sharjah in the United Arab Emirates within six weeks.

Sri Lankan Minister of Transport and Civil Aviation Nimal Sripala de Silva told the Sri Lankan Parliament on Thursday (5 July) that India would be given a major stake in the airport that was accruing losses of Rs 2,000 crore. He added that the final deal is yet to be worked out, as reported by Mint.

When questioned by the opposition, de Silva said that India was the only nation willing to help out with managing the airport, located 241km south of the nation’s commercial capital, Colombo.

Both the airport and the Magampura Mahinda Rajapaksa Port were funded by high-interest Chinese loans. The latter has been given out to a Chinese firm on a 99-year lease for $1.12 billion to offset the loan and the Sri Lankan government has said that the Chinese Navy would not be allowed to use the port. The opposition, led by Rajapaksa, under whom the high-interest deal was agreed upon, has described the lease essentially as selling out to the Chinese.

The airport has a capacity of one million passengers per year and several of the cargo terminals have been leased out by the Paddy Marketing Board to store rice. The revenue generated from this has been reported to be higher than that from aviation.