After The US, Twitter Now Starts Its Controversial 'Fact Check' In India, Targets BJP IT Cell Head Amit Malviya 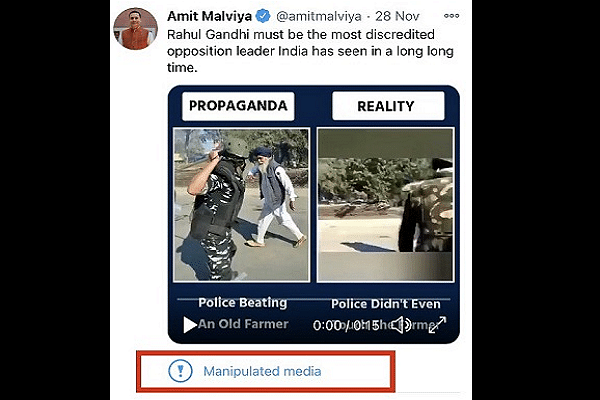 Microblogging giant Twitter earned the ire of social media users today (2 December) after it appeared to have started its controversial fact checks in India, as it targeted BJP IT Cell head Amit Malviya.

Malviya three days ago had countered Congress leader Rahul Gandhi, who shared the photograph of a security personnel and a Sikh man, with the former drawing his stick in an aggressive manner.

This picture was subsequently countered by Malviya who posted a purported video of the incident which shows that the security personnel did not hit the man with the stick and only swung it in the air.

Rahul Gandhi must be the most discredited opposition leader India has seen in a long long time. https://t.co/9wQeNE5xAP pic.twitter.com/b4HjXTHPSx

Malviya in the same tweet also labelled Rahul Gandhi's image as a propaganda aimed at giving the impression that the security personnel assault the man.

We all know the image of the cop beating the farmer is fake. But guess what @Twitter does. They label the fact-check as fake & the fake news goes unchecked. Precursor to full scale election interference pic.twitter.com/R0kz1C9KE7

Some outlets have meanwhile claimed that Malviya had alleged posted a cropped video of the incident with another security personnel having hit the leg of the said protester moments earlier.

It should be noted that Twitter has been in the eye of the storm in the US over similar fact-checks which many allege disproportionately target conservative voices.

It was reported that Twitter CEO Jack Dorsey had been slammed by US Senator Ted Cruz over its censorship of Hunter Biden's (the son of Presidential candidate Joe Biden) stories published by the New York Post.

Twitter in India has also courted numerous controversies which includes suspension of Right Wing twitter accounts - the latest being True Indology and having shown Jammu and Kashmir as part of China.