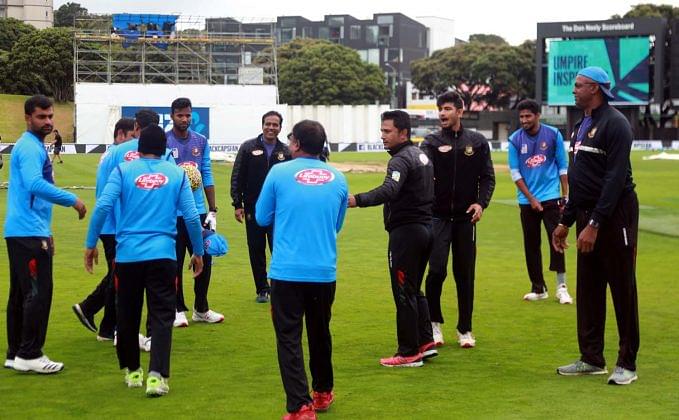 Members of the Bangladesh cricket team took to social media to share how they narrowly escaped from a mass shooting at a Christchurch mosque on New Zealand's South Island today.

Bangladesh team escaped from a mosque near Hagley Park where there were active shooters. They ran back through Hagley Park back to the Oval. pic.twitter.com/VtkqSrljjV

New Zealand Prime Minister Jacinda Ardern said that at least 40 people have been killed in mass shooting at two mosques in the New Zealand city of Christchurch. Ten were killed at Linwood and 30 at the Deans Ave mosque near Hagley Park. A further 27 people were injured.

Bangladeshi test cricketers and members of the team's coaching staff were reportedly on their bus, approaching the Masjid Al Noor mosque in Hagley Park when the shooter began the bloody massacre.

Bangladesh Cricket board confirmed that all their team members are now safely back in the team hotel.

The third cricket test between New Zealand and Bangladesh in Christchurch has been called off following deadly mosque attack. The massacre happened just minutes away from Hagley Oval, where the test was set to be held, and the Bangladesh cricket team narrowly avoided the incident, having to flee the scene.

The team had just arrived at the Al Noor Mosque for Friday prayer when a gunman opened fire, with video showing several Bangladeshi players and media escaping the scene.

Former Bangaldeshi cricket captain Mushfiqur Rahim posted "Alhamdulillah Allah save us today while shooting in Christchurch in the mosque. We (were) extremely lucky...never want to see this things happen again....pray for us."

Alhamdulillah Allah save us today while shooting in Christchurch in the mosque...we r extremely lucky...never want to see this things happen again....pray for us

Entire team got saved from active shooters!!! Frightening experience and please keep us in your prayers #christchurchMosqueAttack

Mario Villavarayen, a strength and conditioning coach with the team, told New Zealand media the players did not see the shooter but heard shots. He said they were shaken but unhurt.

New Zealand Cricket CEO David White confirmed that the third test has been called off as a result of the attack.

"On behalf of NZC - heartfelt condolences to those affected.

"We've cancelled the game. I've spoken to my counterpart at Bangladesh cricket - we agree it's inappropriate to play cricket at this time."

The decision was a joint one between New Zealand Cricket and Bangladesh Cricket, with White saying NZC were shocked and appalled by what had unfolded