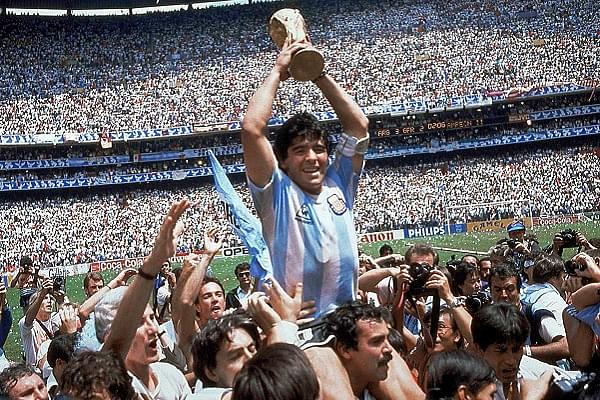 Maradona after lifting the world cup with Argentina in 1986

Maradona reportedly had a successful operation for a blood clot on the brain earlier in November at a Buenos Aires hospital. He was admitted to the Ipensa clinic in Buenos Aires with anaemia and dehydration.

The news of his death was reported by media outlets from Argentina.

Maradona widely considered to be the greatest to have ever played the game, was known for his superb ball control and dribbling skills.

Along with Pele, Maradona is credited with popularising football in millions of households across the globe in the 20th century.

Largely playing as an attacking midfielder Maradona's finest hour arguably came when he led Argentina to victory in the 1986 world cup. During the course of the tournament Maradona's most memorable memory remains his performance against England during the world cup quarter final.

Maradona scored his first goal by nudging it into the net with his hand - an incident infamously immortalised with the phrase "Hand of God" and then scored the second by dribbling past English players all the way from his side of the midfield. Here is a video of what is now known as Goal Of The Century.

At the club level, Maradona started his senior career with Argentinos Juniors just shy of his sixteenth birthday. He then went on to become the star player for top clubs like Barcelona, Napoli and also Boca Juniors.

His most memorable time at the club level came when he was transferred to Napoli in a then record breaking deal worth 6.9 million pounds. Maradona then led the club to its first ever Seria A title in the 1986-87 season and then again in 1989-90.

The enormity of his achievements at Napoli can be gauged by the fact that he broke the monopoly of Northern Italian clubs like AC Milan, Inter Milan, Juventus and Roma and brought silverware to the southern part of the country. Napoli retired the Number 10 jersey in his honour.

After the culmination of his playing career Maradona became a coach and went on to manage the Argentinian national team during the 2019 world cup, when he lead the team to the quarter finals.