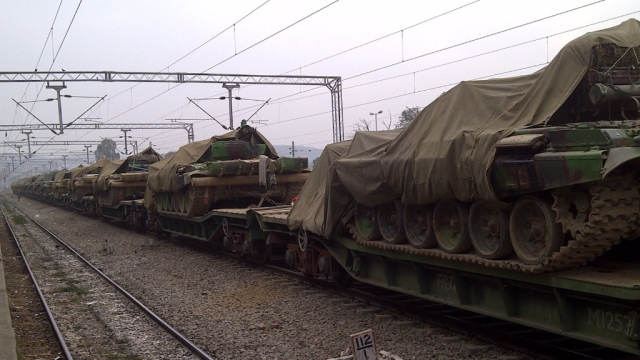 T-72 tanks of the Indian Arm, photographed near Pathankot.

The Indian Railways and the Army are increasing coordination on infrastructure and logistics to make sure that the forces can mobilise swiftly in the event of war and switch between the western front with Pakistan and the eastern front with China much faster than what is currently possible, Times of India has reported.

The railways is already working on military infrastructure in different parts of the country to ensure easy loading and unloading of heavy equipment such as tanks, howitzers and infantry combat vehicles on trains. It is constructing concrete ramps in areas like Arunachal Pradesh’s Bhalukpong, Nagaland’s Dimapur, and Silapathar, Missamari and Murkongselek in Assam. The Army uses up to 750-800 trains to move its equipment and troops throughout the country, whenever required.

“The Army pays railways around Rs 2,000 crore per year for this. For infrastructure development, the railways in some places in also using its own budget,” the daily quoted a senior officer as saying.

Now, the government has reportedly asked the railways to increase the speed of the trains which are used for moving equipment and ammunation.

“Concurrently, there is an increased focus on significantly enhancing the speed at which the special military trains run… trial runs are in progress. This will help in faster mobilization,” the officer added.

The Army is also “tagging into” the online monitoring system used by the railways to keep track of the 5,000 train wagons it owns.

A team of engineers from the railways is expected to visit various strategically important areas in the Northeast and along the border with Pakistan to understand specific infrastructure requirements of the army.

Following the attack on the Parliament in 2001 by Pakistan-backed terrorists, India mobilised its army to coerce Islamabad to rein in its terror proxies. However, it took the Indian Army weeks to mobilise its three strike corps in Ambala, Mathura and Bhopal. This gave Pakistan the time it needed to shore up its defences and the international community a window to intervene diplomatically. Lack of proper infrastructure to mobilise forces quickly contributed significantly to the delay.