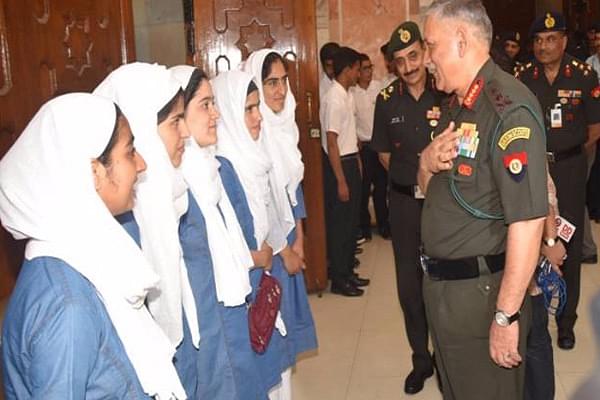 General Bipin Rawat with students from the valley (PIB)

The Army’s Kashmir Super - 40 initiative that provided coaching to Indian Institute of Technology (IIT) aspirants from Jammu and Kashmir has achieved results that beat the best of the IIT coaching centres in the country.

The programme which provides an eleven-month free lodging, boarding and coaching programme to 40 students from the valley preparing them for Engineering Entrance Exam (IIT-JEE) has broken its previous records as nine students of its 2016-17 batch cracked the highly competitive and IIT-JEE advance.

Out of the 40 students, 35 were boys and five were girls. The boys were provided training in the valley itself, while the girls trained in Delhi. Of these, 26 boys and two girls qualified in the IIT-JEE Mains in April 2017, and nine out of these 28 have now made it to the prestigious IITs.

Twenty four of these Kashmiri youth met the Chief of Army Staff, General Biping Rawat, who urged them to ‘motivate the youth of Kashmir to shun violence and effectively contribute in nation building’. The Army in coordination with its partner Centre for Social Responsibility and Learning and Petronet LNG Ltd has been conducting the programme since 2013 in a bid to provide underprivileged students in Kashmir an opportunity to prove themselves at the national level.

The nine students who have made it to the IITs are Aqib Amin, Mh Mussa, Bashir Ahmed, Nasir Ali, Imtiyaz Hussain, Feroz Ahmed, Maisam Ali, Shahid Sultan and Jahangir Shakeel. The coaching centre is now geared to break this record in the coming year and has upped its student intake strength to 50.