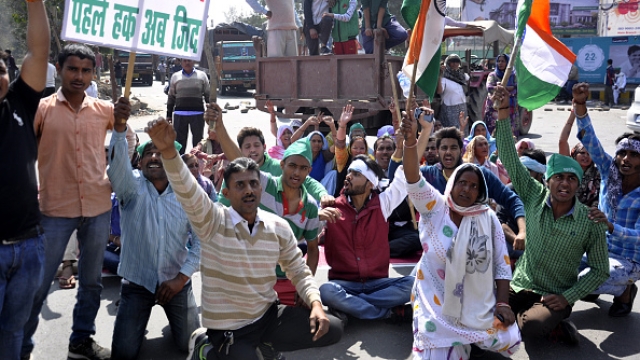 Jats protesting for their demands for reservation (Getty Images)

Last year, when the Jat agitation for quota in state and central jobs began, the Manohar Lal Khattar government in Haryana took a high-handed approach and, in a rush to quell the protests, ended up fanning them. Certain elements of different castes under the umbrella of other backward classes (OBC) also didn’t help matters when they attempted to take the law into their own hands by trying to free the roads blocked by Jat protesters. This made matters worse, and what started as a demand for quota soon turned into a petty caste war which led to fires, loot and clashes throughout Haryana.

Many young protesters who were complicit in unlawful acts, were captured in CCTV cameras or mobiles phone. Some innocents also bore the brunt of the system’s crackdown once the agitation cooled down. They may not have been involved in such acts, but since their faces were visible while shouting slogans, they got thrown under the bus too.

The Khattar government moved in a hurry to pass an act in the assembly to give reservation to Jats along with five other communities in the state. The protesters were cajoled into calling off their agitation, and they all returned home. But soon, the quota was stayed by the judiciary. The High Court of Punjab and Haryana is still hearing the case about the legal validity of the Jat quota in the state. The administration had also promised to the protesters that no innocent youth will get prosecuted. Other demands like providing permanent jobs to the family members of dead youth and offering higher compensation to those injured were not entertained at the time. However, the agitation was called off.

So, when the protesters decided to resume the agitation last month – after a year of lull, it got everyone worried. The administration was better prepared with a resolve to not let the mayhem of last year be repeated. Protesters are also disciplined this time around, and organisers are taking great care to maintain decorum.

The administration is also displaying much more maturity than it did last year. For instance, it is using Jat police officers to talk to adamant protesters. So far, they have been successful in controlling the situation on the ground. They are also more receptive to the demands of the Jat community this time. After massive protests on Sunday (19 February), which were peaceful, the government held meetings with the members of All India Jat Aarakshan Sangharsh Samiti (AIJASS) and decided to raise the compensation for those injured in security personnel action during last year’s riots to Rs 2 lakh. It also decided to form a four-member panel comprising two members each from the government and AIJASS. The Samiti’s chief, Yashpal Malik, said that if these two demands are met in the next week, dharnas will be called off. If not, the leaders are planning to escalate the protests further with plans to march to Delhi in early March and gherao Parliament.

One hopes that the government delivers on these two fronts in the agreed-upon time frame and not let the situation get out of control. The onus is also on the Jat leaders to work with the government to eke out as many demands in their favour as they can.