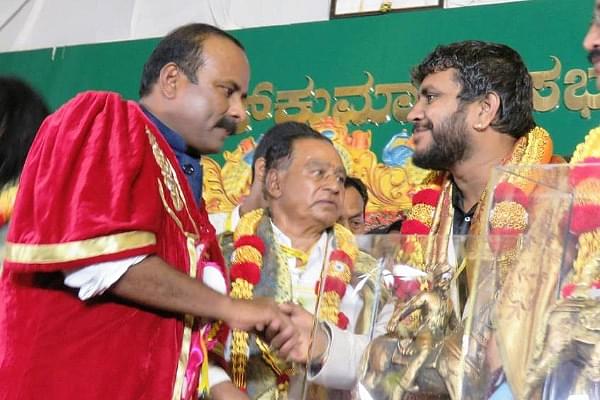 “BBMP has disgraced Kempe Gowda, Bengaluru’s Founding Father, I demand an immediate apology from BBMP and call to nullify the awards,” said Anil Shetty, a 31-year-old activist, displaying the list of recommendations given by several ministers, MLAs and politicians across the state.

Among the hundreds of the awardees, another recipient of the award is an ex-convict, as reported by Mirror.

Shiva Surya, a known aide of Minister D K Shivakumar and his personal photographer is also seen with Mayor Sampath Raj as he hands out the award to him.

Anil Shetty said that the disgraceful politicisation of these awards is a shame to those who have genuinely deserved it, and earned it as a result of their hard work and contribution to society.

Adding on, Shetty says “Kempe Gowda award is supposed to be given to those extraordinary citizens who have made exceptional contributions to our city, but BBMP did not follow any criteria in selection process of winners and most of the awardees were political party workers or followers of local MLA,MPs or corporators. This has disgraced our Nada Prabhu. We are moving to court to nullify this year award show and we demand public apology from BBMP Mayor and officials. This is a clear case of political self interest to an extent they did not even think about safeguarding the honour of Kempe Gowda. We find many criminals, chamchas, real estate brokers and anti social elements on the list which itself defeats the purpose of the award.”

Senior theatre personality Kappanna was accompanied by many others in what can be termed as an ‘award wapsi’ in Bengaluru.

“This award show has lost its value due to political intervention. Kempe Gowda award has become free for all and it’s very disgraceful. BBMP has totally failed in organising it,” said Kappanna, who returned the Kempegowda award on the same day.

Several deserving nominees’ names went suddenly missing, and chaos erupted while distributing the prizes as many trophies were misplaced.

There are specific examples where one corporator has nominated more than twenty candidates for the award. Additionally, political workers getting the award is a conclusive evidence that the government has totally discredited the award of its value, compromising on moral and ethical values to provide their workers with an incentive of this nature, Kappanna added.