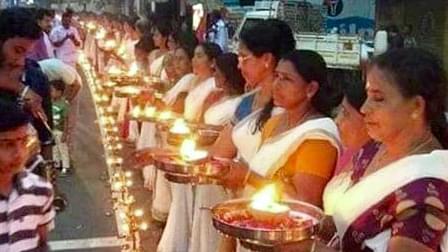 As the communist government in Kerala gears up for the women-wall on New Year’s eve, lakhs of devotees, predominantly women, lined up with lamps on the streets from Kasaragode to Thiruvananthapuram on Wednesday (26 December) as part of the ‘Ayyappa Jyoti’ programme organised by the Sabarimala Karma Samiti, reports The Times of India.

(Below is a video from news portal Mathrubhumi, which depicts the public movement)

The programme, though touted as a counter to the state government-sponsored women’s wall on 1 January 2019, however, calls for the protection of temple traditions and rituals in Sabarimala. The movement is also reported to be an attempt to raise awareness among devotees on the communist agenda to degrade the traditions of Hindu temples, and its haste in implementing the 28 September Supreme Court verdict that set aside the centuries-old tradition of restricting women belonging to childbearing age from entering the temple.

Almost 180 Hindu organisations reportedly took part in the Ayyappa Jyoti, where women outnumbered men. The programme saw devotees standing alongside each other over a 756-km stretch and lit lamps across the state at almost the same time. It started at 6 pm and lasted for 15 minutes. The ‘wall of lights’, as it was called, began from Hosangadi Sri Dharma Shastha temple in Kasaragode and ended at Kaliyikkavila in the state capital.

The mass movement had the support of the Nair Service Society (NSS) and the Yoga Kshema Sabha, both facilitating the participation of devotees, especially women. The BJP provided the political support. Reports also suggest that the ‘Ayyappa Jyoti’ was lit at almost 70 points in Tamil Nadu as well.

Eminent leaders of the likes of G Sukumaran Nair, Secretary of the NSS, had earlier come out in full support for the ‘Ayyappa Jyoti’ and slammed the government-sponsored women’s wall accusing the communist government of creating caste divide among Hindus. Actor and BJP MP, Suresh Gopi, participated in the event at Thiruvananthapuram, whereas, former state police chief, TP Senkumar, took part in the event at Kilimanoor. Former Kerala Public Service Commission Chairman KS Radhakrishnan joined the Jyoti at Angamaly.

BJP state president, PS Sreedharan Pillai, lit a lamp in front of the state secretariat along with BJP legislator O Rajagopal. TOI, however, reported attacks on the participants of Ayyappa Jyoti at Kannur and the BJP has alleged that the CPM was responsible for the same.

The increased participation of devotees, especially women, is seen as a severe blow to the ruling LDF as they are setting the stage for a 620-km women’s wall on New Year extending from Kasaragod to the capital city Thiruvananthapuram in the name of upholding ‘renaissance values’ of the state by spending Rs 50 crore from the state treasury. More than 30 lakh women will reportedly participate in the wall.