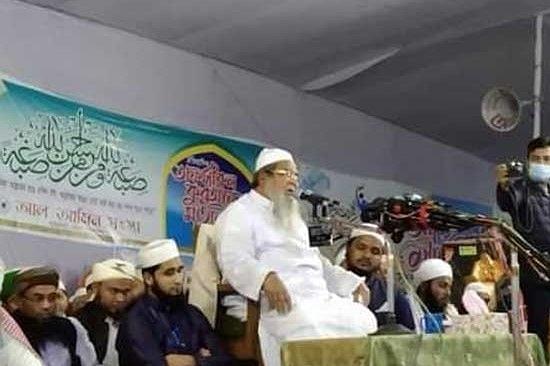 Junaid Babunagari, the new chief of radical Islamist group Hifazat-e-Islam, has threatened to pull down statues no matter which party erected them.

The Radical leader warned, “The statues are against the Sharia, no matter whose statue it is. I won’t name a party or leader. But I swear by Allah, if someone erects a statue, even of my father, I will be the first to pull it down. I will pull down statues no matter which party erects them,” he said.

Babungari made the statement along with four demands to the government from the Hathazari mahfil on Friday night.

The four demands are — stop ISKCON’s activities in Bangladesh, officially declare the ahmadiyas ‘non-Muslim’, close embassy of France and expel the French ambassador, and pass a resolution condemning France in parliament.

“I am warning you. The atheists who are sitting on your neck will harm you, they will kill you. We are not your enemy. We want ‘peace and order’ in the country,” Babunagari warned Bangladesh Prime Minister Sheikh Hasina.

He made the statement at a gathering of the radical groups organised by Jamat-e-Islam by the name of Al Amin Sangstha on the premises of Parboty Government High School in Chattogram’s Hathazari.

Mamunul Haque, joint secretary general of Hifazat, was supposed to join the three-day programme on the closing day, but he could come not due to ongoing protests by the ruling Awami League leaders and workers over his remarks against a statue of independence hero Bangabandhu Sheikh Mujibur Rahman in Dhaka.

“The Prime Minister has said that Bangladesh will be run in line with the Charter of Madinah. If it is true, then nothing can be done against Islam in this country. Inshallah, the Prime Minister will not let it (setting up statues) happen,” said Babunagari.

Earlier on November 13, a rally of the fundamentalists under the banner of ‘Touhidi Janata Oikya Parishad’ was held at Dhupkhola ground in Dhaka’s Gandaria to oppose the installation of a sculpture of Bangabandhu on the occasion of Mujib Year.

Addressing Hasina, he had said, “I love Bangabandhu from the bottom of my heart. Your father Bangabandhu Sheikh Mujib, we respect him. Who killed this Bangabandhu? Students of a madrasa? No, no. Bangabandhu was killed by the people of Bangabandhu.”

When the radical leaders shouts against ahmadya, atheists and anti-sculpture- there was no protest from Bangladesh government or the ruling Party Awami League, so the allies criticized it.

A statement issued by the JSD said, “By shifting the sculpture in front of the Supreme Court and exposing the religious businessmen, today this evil force has shown the courage to oppose the installation of the sculpture of Bangabandhu.”

The Committee for the Elimination of the Deadly collaborators of 1971 has expressed fears of a “catastrophe” for the country and the nation if legal action is not taken against the fundamentalists who have demanded the removal of the Father of the Nation’s sculpture.

Later, at a function in Chittagong on November 15, Deputy Minister for Education and Chittagong-9 MP Mahibul Hasan Chowdhury Nawfel said, strict action would be taken against those who opposed the installation of Bangabandhu’s sculpture if they do not apologise.

Claiming that Hifazat-e-Islam, which carried out 2 day-long violence demanding ‘drag Hasina down from the power’ in Dhaka’s Motijheel on May 5 and 6, 2013, was a “complete non-political organisation”, the top leader of the organisation said, “Nick in remand, hang him, we have to speak for Islam.”

Although the three-day-long gathering near Hathazari Madrasa was organised by the ‘Al Amin Sangstha’, mainly those associated with the Jamat-e-Islam and Hifazat were present in the gathering.

The event claims that the company has been organising mahfils every winter in Hathazari since 2005. As conflict between the Jamat-e-Islam and anti-Jamat continues within Hifajat-e-Islam, the Qawmi madrasa-based Islamist organisation has chosen Babunagari as its ‘Ameer’ at a council held on November 15.