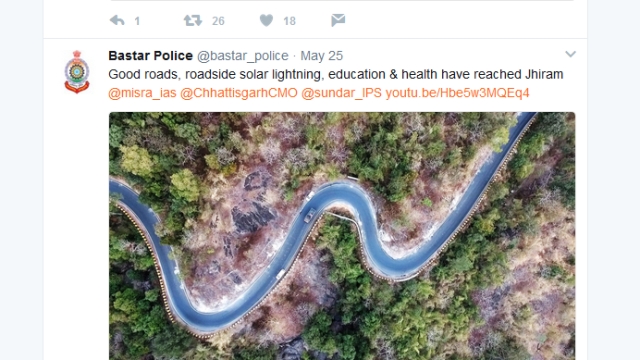 While security forces are engaged in a battle against left-wing extremism in the deep forests of the red corridor, Bastar Police has taken to social media to counter the propaganda of urban Naxals. Now on YouTube, Twitter and Facebook, the police force is countering the fiction of propaganda warriors with facts.

On the social media websites, Bastar Zone Police is interacting with people from different parts of the country, informing them about what it is doing in the region to improve the lives of the people who are disturbed by violence and exploitation. It is also informing people about the ground situation, operations and local developments, such as construction of roads and hospitals.

As a part of this strategy, the police on Wednesday (24 May) released a video of its civic action programme on its YouTube channel. The programme, the police says, has helped it build trust among communities affected by Naxalite violence and restore normality through active participation.

Countering disinformation is vital to solving the problem of Naxalism. It helps the security forces limit public support and sympathy for the adversary. This strategy of the Bastar police is based on a new doctrine called SAMADHAN, announced by the Ministry of Home Affairs to counter left-wing terrorism. It calls for the use of aggressive strategies and technology to defeat Naxalites.