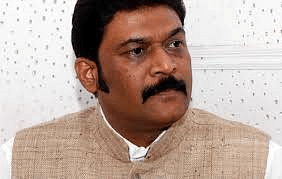 The Congress party, which has been plagued by major internal dissidence and is waging a losing battle to prevent its rebel MLAs from defecting to BJP, suffered yet another setback as two of its MLAs came to blows in the early hours of Sunday. The Congress has shifted all its MLAs to the luxurious Eagleton resort on the outskirts of Bengaluru.

Speculations were rife in state political circles that the coalition government was likely to collapse. Anand Singh was among the five rebel Congress MLAs — Nagendra B, Bheema Naik, Kampli Ganesh and Pratap Gouda were the others — who had moved to a luxury hotel, Renaissance, in Powai, Maharashtra. Singh had even given several anxious moments to the Congress in the run-up to the formation of the coalition government, throwing hints that he had already decided to rejoin BJP, but eventually stayed with the party.

It has now emerged that Anand Singh, who was once close to the Reddy brothers and defected to Congress, was accompanying the other MLAs as an ‘informer’ and was keeping Congress troubleshooters informed about his fellow legislators' plans to jump ship to BJP. According to reports in local TV channels, Ganesh, furious with Singh for foiling his plans to join the BJP, entered into an argument with him and attacked him with a liquor bottle.

According to other reports, Hagaribommanahalli MLA Bheema Naik too was present during the incident. Three MLAs were having a drink after the Congress Legislature Party meeting on Saturday when they got into a brawl. Singh was admitted to a city hospital and is currently undergoing treatment.

In an attempt to downplay the incident, state Congress leaders ended up providing contradictory versions of the incident.

Deputy Chief Minister G Parameshwara acknowledged that the duo had indeed got into a fight. "I heard that they have fought. But when I spoke to other MLAs, they said it was just an argument. I have no information about Singh being hospitalised,” he said.

Another senior Congress leader, DK Suresh, brother of Congress strongman and senior minister DK Shivakumar, who visited the hospital to meet Singh, claimed that Singh was admitted due to chest pain.

“I don’t know about the fight. Anand Singh is admitted in hospital due to chest pain. There are no injuries or anything. His parents are here at the hospital. Other issues are just speculations,” ANI quoted Suresh as saying.

DK Shivakumar, who many suggest triggered the political crisis in the state, rubbished reports that the two MLAs were involved in a brawl. “There was no fight, no assault, no liquor bottles; both the MLAs will speak to the media soon,” he said.

The state BJP launched a blistering attack on Congressmen for the infighting. “What more proof do we need to tell that all is not well within Congress. Congress MLAs in Eagleton resort indulged in a physical fight and one MLA is admitted. How long will Congress be in denial mode and blame BJP for all their differences? When a political party is lame, it loves to blame,” BJP Karnataka tweeted.

What more proof do we need to tell all is not well within Congress..

Congress MLA's in Eagleton resort indulged in physical fight & 1 MLA is admitted. How long will congress be in denial mode & blame BJP for all their differences?

When political party is lame, it loves to blame pic.twitter.com/4IWSr5xUWi

Furthering deepening the political crisis in Karnataka, four dissident Congress MLAs on Friday skipped the Congress Legislative Party (CLP) meeting that was convened yesterday (January 19) in an attempted show of strength by the party against an alleged bid by the BJP to destabilise the H D Kumaraswamy-led Congress-Janata Dal (Secular) government. Two independent MLAs, H Nagesh from Mulbagal and former minister R Shankar (Ranebennur), have already withdrawn support to the coalition government.

Former Karnataka chief minister and CLP leader Siddaramaiah told reporters after the CLP meeting that Congress would initiate disciplinary action against the four absentee MLAs - Ramesh Jarkiholi, B Nagendra, Umesh Jadhav and Mahesh Kumatahalli. Siddaramaiah had earlier threatened his party MLAs with the anti-defection law if they skipped the meet, but to no avail.