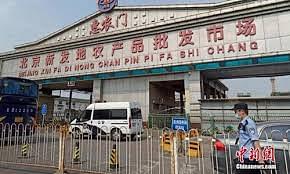 Chinese health authorities have locked down several neighborhoods in Beijing in an attempt to contain a fresh outbreak of novel coronavirus, South China Morning Post reported.

Beijing has reported 79 new cases as of Sunday (Jun 14) sparking fears of coronavirus resurgence. All cases linked were to the Xinfadi wholesale market, a sprwaling food distribution centre in southern Beijing which occupies 107 hectares and supplies vegetables, fruits and meat to northern provinces like Shandong, Shanxi, Hebei and Liaoning.

Beijing had been clear of local Covid-19 transmission for 55 days until the first new case tied to the market – a man with no history of travel or contact with people returning to Beijing – was diagnosed on Thursday.

Health authorities have initiated what they described as "wartime-like measures” to combat the outbreak including travel restrictions, residential lockdowns and the mass mobilization of neighborhood-watchdog committees to conduct temperature checks and enforce quarantines. Local authorities also canceled the return to campuses of more than half a million primary-school students, who were supposed to resume classes on Monday.

Authorities are investigating the possibility of someone coming into contact with the contaminated seafood or meat in the market and further spreading the virus. They are also ascertaining whether the virus had spread by an infected person coughing or sneezing in the market.

Genome sequencing of the strain of the coronavirus which caused the new COVID-19 outbreak in Beijing at the Xinfadi wholesale food market shows it originated from Europe, an expert from Beijing Center for Diseases Prevention and Control (Beijing CDC) announced on Sunday.

Beijing's Fengtai district will conduct nucleic acid tests on more than 46,000 residents living in communities near the Xinfadi market, where a total of 51 confirmed cases in the capital city were traced to, government officials said.

Though the numbers have been heavily disputed, China has officially reported more than 83,000 Covid-19 infections and over 4,600 deaths since the pandemic began.