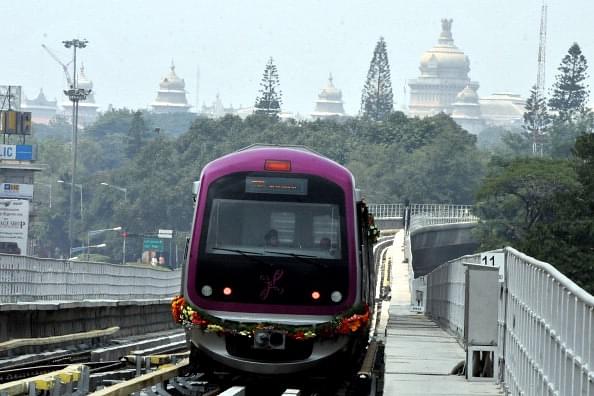 The Namma Metro in Bengaluru, with the Vidhan Soudha in backdrop.

The ticket vending machines installed at major metro stations in 2012 are set to be withdrawn by the Bangalore Metro Rail Corporation Limited (BMRCL). The machines were set up in Metro stations like Majestic , MG Road, Indiranagar and Byappanahalli.

However, many passengers say the machines were hardly used and were frequently out of order.

“BMRCL should have deployed staff to guide passengers to use these machines, but most of the times they used to be out of order. There have been several complaints of staff at the counters not returning the change,” said Lokesh K, another passenger, as reported by TOI.

The daily ridership has of Namma Metro has increased from 3.5 lakh to 4 lakh and is expected to touch 5 lakh after all 50 trains gets six coaches by June 2019. The number of smart card users has also shot up, around 60 per cent of those travelling on Purple Line and 51 per cent of the passengers on Green Line are now using the cards.

BMRCL managing director Ajay Seth confirmed that they are withdrawing the vending machines. “The vendor is exiting the business. We are chalking out an IT solution so that commuters can pay using Metro website/app and recharge their cards at entry gates,” he added.

Officials behind the move also say that the decision comes in the backdrop of poor usage of the machines after demonetisation in 2016, which has rendered them dysfunctional. The machines were not re-calibrated to accept new notes, particularly those of Rs 10, Rs 200, Rs 500 and Rs 2,000 denominations.