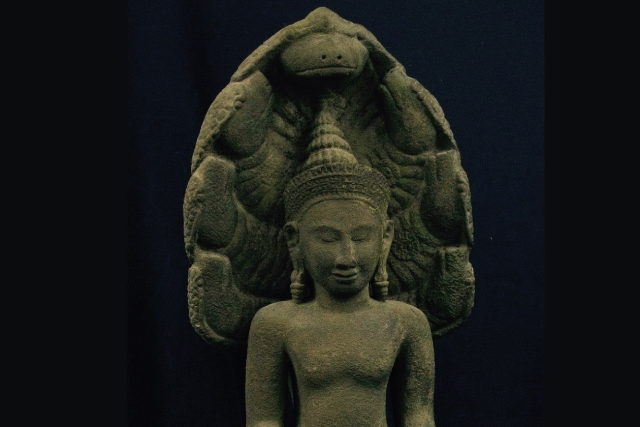 An ancient Buddhist sculpture of Naga Muchalinda has been unearthed in Old Guntur by archaeologist and Buddhist scholar Emani Sivanagi Reddy on Wednesday (19 December), reports The Hindu.

The limestone carved sculpture was unearthed in the southwest corner of the Agesthyeswara Temple in Old Guntur and is believed to dated 3rd Century.

Reddy who is the CEO of Cultural Centre of Vijayawada says that Naga dynasty and Buddhist traditions flourished here, thus proving that Old Guntur was a contemporary Buddhist site to Nagarjunakonda 1,800 years ago. He visited the temple along with the secretary of Amaravati Buddha Vihara Subhakar Medasani, as a part of the scheme ‘Preserve Heritage for Posterity’.

The sculpture depicts the serpent king Naga Muchalinda protecting Gautama Buddha while he meditated under the Bodhi tree. It is also supposed to have ‘Buddha Pada’ (Buddha’s footprints) sunken into the sculpture’s pedestal.

Emani Reddy pointed out that similar sculptures of Naga Muchalinda of the Theravada and Mahayana phases of Buddhism (1st Century BC to 3rd Century AD) were reported from Amaravati, Chandavaram, Ghantasala, Nagarjunakonda, Pedakallepalli and Goli, earlier.

He requested the Department of Archaeology and Museums and temple officials to protect the shrine since it showcases the last phase of the Amaravati School of Art of the Ikshwaku period.