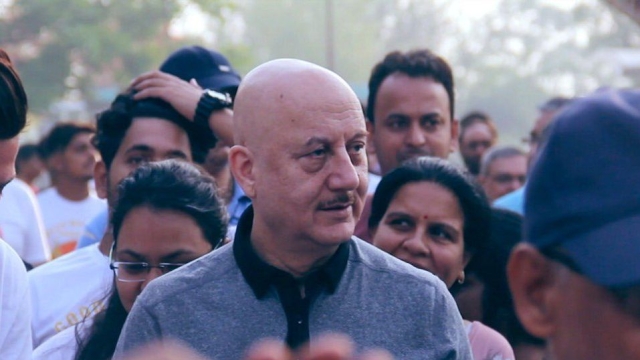 Anupam Kher has acted in more than 500 movies both internationally and in Hindi cinema and has always pioneered in bringing change through his work. (image via @AnupamPKher/Twitter)

Actor and former chairman of the Film and Television Institute of India, Anupam Kher has been ranked in the Hollywood Reporter’s Social Climbers Chart and been placed on the 10th on the ‘most influential actor on social media in Hollywood’, Times Now News reports.

Hollywood Reporter is an entertainment magazine and website releasing the weekly chart based on a celebrity's engagement on social media alongside weekly additions and followers. The Social Climbers charts are rankings of the most popular entities on various social media platforms.

“It's a wonderful feeling. I thank my fans for their encouragement and support on social media,” Anupam Kher told Bombay Times.

Anupam Kher has acted in more than 500 movies both internationally and in Hindi cinema and has always pioneered in bringing change through his work. The 64-year-old is very active on his social media, engaging his large fanbase in various funny videos, and interactive posts on both Twitter and Instagram.

He is found to be a real inspiration hence finding his place on the list of most popular social media influencer in Hollywood. Kher finds himself on the list with several other actors like Priyanka Chopra, Dwayne Johnson, Mark Hamill, Jennifer Lopez, Kevin Hart, Will Smith, Gabrielle Union, Ricky Gervais, and Mark Ruffalo.