Central GST Collections Fall In December Even As Number Of Returns Reaches Record High Of 7.24 Million 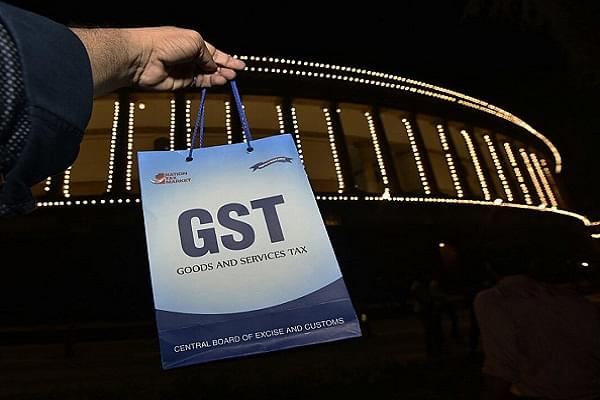 A man holds a sign reading ‘GST’ outside the Parliament building. (photo by Arun Sharma/Hindustan Times via Getty Images)

The government’s collection of Goods and Services Tax (GST) has dropped to Rs 94,726 crore in the month of December, lower than both the previous months, making it the seventh out of nine months in this fiscal when a shortfall has been reported, reports Business Standard.

Now, the government will have to collect on average Rs 1.23 lakh crore each month over January, February and March to meet its budgetary targets.

The centre had expected to bring in Rs 6.04 crore through the Central GST (CGST) in the 2018-19 financial year, while its collections for the nine months stand at Rs 3.41 lakh crore.

However, the Integrated GST (IGST) which is meant to be divided between the centre and states, amounts to another Rs 1.31 lakh crore, and if half of it is appropriated by the union government, then their total share stands at Rs 4.07 lakh crore.

Finance Ministry officials have admitted that the current trajectory of collections points towards a shortfall, calculating that the deficit amount might be around Rs 40,000 crore. Revenue and capital expenditure might have to be slashed to deal with the issue.

The slowdown has surprised observers since Diwali season should have boosted collections in December..

However, one positive news from December is that the number of monthly returns (GSTR-3B) filed has reached 7.24 million, the highest level recorded.