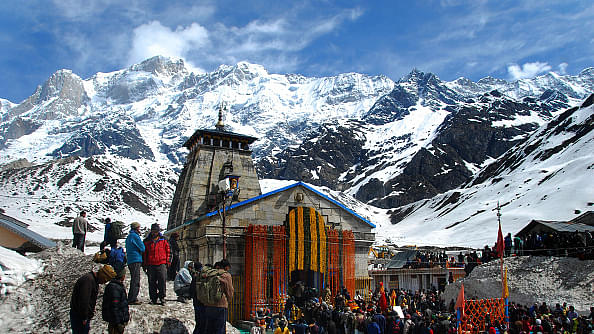 With the doors of Shri Kedarnath Mandir thrown open to the public on 9 May, the legendary Char Dham yatra has begun with the ever-enthusiastic devotees chanting the hymns of the Vedas and entering the Mandir at 5:33 am, reports Zee News.

The six-month-long Char Dham Yatra, circuiting a set of four Hindu pilgrimage shrines- Kedarnath, Badrinath, Gangotri and Yamunotri at the heights of the Garhwal Himalayas, has begun on the auspicious occasion of Akshay Tritiya.

#WATCH Uttarakhand: Portals of the Kedarnath temple open for pilgrims after a period of six months. pic.twitter.com/FN39K3LXFL

In the meantime, the gates of Gangotri and Yamunotri opened at 11:30 am, with thousands of devotees awaiting darshan.

The Yatra attracts lakhs of devotees from all over the world, every year. The pilgrimage commences from Yamunotri and meanders through Gangotri, Kedarnath before concluding in Badrinath, which would open to pilgrims from today (10 May).

These shrines remain closed from October-November every year because of heavy snowfall and reopen in April-May.

Arrangements are made for 3,000 pilgrims by the government by setting up tents in Kedarnath. Though the snowfall is still happening in the area, the path to the shrine is cleared as a measure to conduct the pilgrimage smoothly.