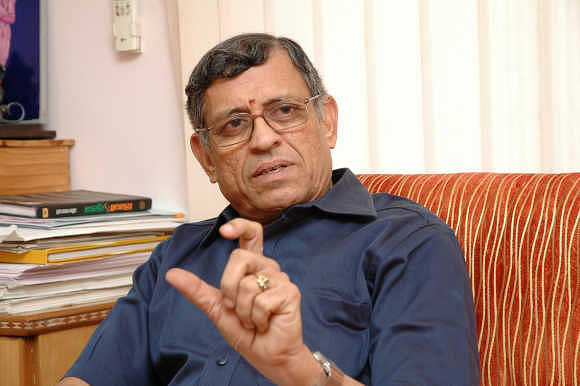 An attempt by a gang of nine men to attack the Chennai residence of noted chartered accountant, influential Sangh ideologue and editor of Thuglak magazine S Gurumurthy in the early hours of Sunday (Jan 26) was foiled by an alert police personnel, New Indian Express reported.

According to police, a group of 5 men attempted to trespass into Gurumurthy’s residence located at Varadarajapuram area of Mylapore in Chenai. One of the alleged intruders was seen carrying a ‘suspicious-looking’ bag which is believed to a petrol bomb. However he was spotted by a police constable who was posted on duty in that neighbourhood . The cop then chased the the gang who reportedly escaped on five bikes. Mylapore police station was immediately alerted about the incident.

My thanks for all those concerned at my safety because of the incident at my home at 3.30am in the morning. The police is investigating the matter. I am used to security issues since at least 1986. Kanchi Mahaswami will take care.

Lessons for the attackers. One, They must know I have been facing threats for 30 years. Theirs is not new to me. Two, they need better training and more courage.

The attempted attack comes days before Gurumurthy edited magazine is expected set to republish a1971 article on Salem rally (were Hindu deities were slippered by followers of Dravidian ideologue E.V Ramasamy Naicker) which has invited the ire of Periyarists. The issue was brought the fore after actor-turned-politician Rajnikanth referred to incident at an event marking 50- years of the magazine on January 14.