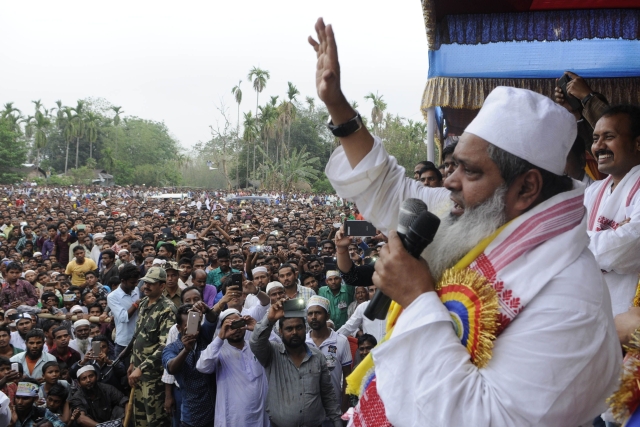 Badruddin Ajmal, Chief of AIUDF, during an election rally at Gossaigaon Telipara, in Assam. (Subhendu Ghosh/Hindustan Times via GettyImages)

The opposition Congress on Tuesday (19 January) announced a five-party 'Mahagathbandhan' to take on the ruling BJP-led coalition in Assam in the upcoming Assembly elections expected to be held in April-May.

He said that regional parties are welcome to join the Mahagathbandhan to oust the Bharatiya Janata Party from power in the state.

"The Congress is always keen to oust all communal forces for the best interest of the country. People are ready to vote out the BJP as its misgovernance caused a lot of distress to the people, who have become fed up with the BJP," he said.

AIUDF General Secretary Aminul Islam said the Mahagathbandhan is good for Assam as it would fulfil the expectations of the people of the state and throw the BJP out of power.

Besides the AIUDF, a Muslim-dominated party in Assam, and the Left parties, state Congress leaders had held several meetings in the past few months with the 'like minded parties'.

AIUDF President and Lok Sabha member Maulana Badruddin Ajmal has been stating that the two parties (Congress and AIUDF) have decided to contest the Assembly polls together since their tie-up for the Bodoland Territorial Council (BTC) polls held last month.

Baghel and other central leaders held meetings with the state party leaders in Guwahati before Assam Congress chief announced the Mahagathbandhan.

The Congress had suffered a setback in the recent elections to the BTC and the Tiwa Autonomous Council. Two of its MLAs - Ajanta Neog and Rajdeep Goala - had joined the BJP last month, delivering another blow to the party.

In the 2016 Assam assembly elections, the Congress had contested on its own without an electoral alliance with any party, securing 24 seats.

After the last Assembly polls, the BJP formed the government in Assam for the first time after winning 60 seats following the formation of an alliance with the Bodoland People's Front (BPF) and the Asom Gana Parishad (AGP), which won 14 and 12 seats, respectively. The ruling alliance also has the support of an Independent MLA.

The 126-member Assam Assembly is likely to go to the polls in April-May along with West Bengal, Tamil Nadu, Kerala and Puducherry.