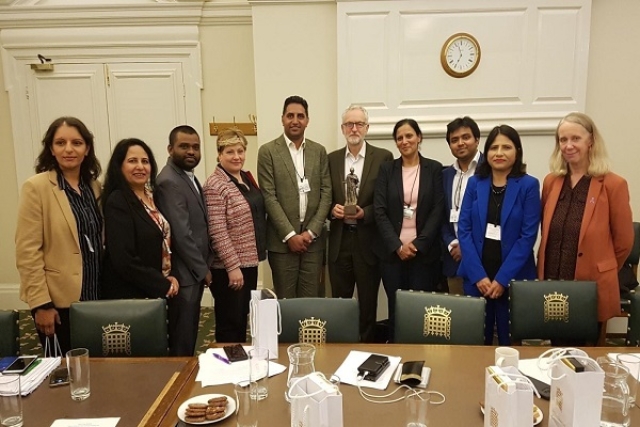 The Congress got engulfed in a controversy on Thursday (10 October) after a delegation of its overseas chapter in the UK met British Labour Party leader Jeremy Corbyn, a vocal India critic, who tweeted, "human rights situation in Kashmir" was discussed and there must be an "end to the cycle of violence and fear" there.

The delegation was led by Kamalpreet Dhaliwal, considered close to Rahul Gandhi and some other top leaders of the party.

As a controversy erupted, the Congress got into a damage-control mode saying the UK chapter had no "mandate or authorisation" to speak on behalf of the party and it disowned any claims made.

"We are shocked by this misrepresentation and unauthorised statement made on behalf of the Congress," said the senior party spokesperson Anand Sharma, who also heads the foreign affairs cell.

Earlier, Corbyn, a known anti-India leader, said, "A very productive meeting with UK representatives from the Indian Congress were held where we discussed human rights situation in Kashmir. There must be a de-escalation and an end to the cycle of violence and fear, which has plagued the region for so long."

Criticising the Congress, the Bharatiya Janata Party (BJP) tweeted: "Appalling! @INCIndia owes it to the people of India to explain what its leaders are telling foreign leaders about India. India will give a befitting reply to Congress for these shameful shenanigans!"

To this, the Indian Overseas Congress UK tweeted: "Our meeting with @jeremycorbyn was held to condemn the Kashmir resolution passed by his Party & to reiterate that J&K is an internal matter & outside intervention will not be accepted. @BJP4India's malicious statements are another attempt to distract people from their failures."

Sharma asserted, "Any issue pertaining to the state of J&K is purely India's internal affair. What the Congress has to say is communicated officially. No other entity, individual or a body, has any authority to do so. We disown any such claims in entirety."

He said the Congress would write to the Labour Party to convey its sentiments.

"The Congress sticks to the Congress Working Committee (CWC) resolution passed on 6 August and its position is firm and consistent and clear that Kashmir is an integral part of India," Sharma said.

The Overseas Congress is headed by Sam Pitroda, a close aide of the Gandhi family.

The controversy could cause harm to the Congress in Maharashtra and Haryana, which are going to polls in 10 days and the ruling BJP might rake up the issue.