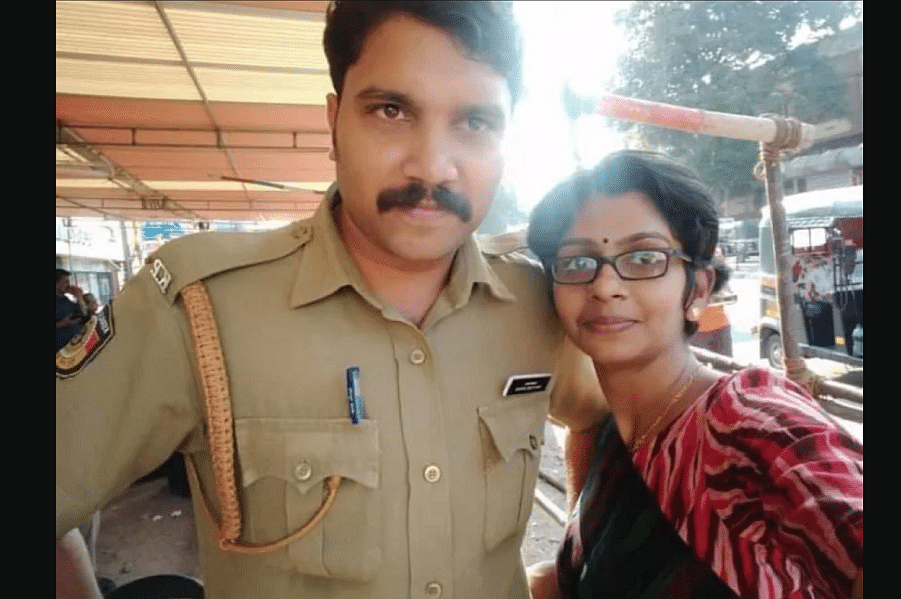 A former journalist with leading Malayalam news channels has alleged that she and her family were targeted by the CPI-M "cyberbullies" and her policeman husband was subjected to "moral policing".

Vineetha Venu said that her husband, who is posted at Chombala police station in Kozhikode district, was returning home when his friend, who is a soldier posted in the northeast, requested him to check about the well-being of his parents who staying close to their residence at Payam in Kannur district.

When he stopped his bike near his friend's home and was attending a phone call, a group of drunken youths came and started to question his presence, until police from Iritty arrived at the scene and "rescued" him, she said.

However, she said, that pro-CPI-M social media groups started targeting the family and accused her husband of having found in suspicious circumstances and from next day, there were many stories about her husband and a news report even appeared in CPI-M mouthpiece 'Deshabhimani' on Friday.

In her Facebook post late on Saturday, the woman journalist said that her husband who has never consumed alcohol in his life was subject to medical testing of alcohol use and was found negative.

In the public post which has gone viral by now, Vineetha pleaded with the CPI-M leadership to relieve them of their trauma by "killing the family with a single swing of the machete".

"I, my husband, and my small children will come at Kannur town square... finish us off, but please kill us by a single swing of the machete," she wrote.

Speaking to IANS, Vineetha contended that the CPI-M and its cadres have been targeting her ever since she reported on the brutal murder of Youth Congress worker, Shuhaib who was attacked by a group who are allegedly CPI-M men on February 12, 2018 and died the next day.

"The spot reporting antagonised the CPI-M and they started showering abuses on me and my husband in social media groups," she said.

According to her, another incident that allegedly drew the ire of the CPI-M was a story she did while working with a leading news channel on the leakage of Covid positive patient details, though it was also reported by other news channels.

Noting CPI-M cyber warriors targeted her and levelled allegations that it was her husband who had given her the information, Vineetha said: "This was pure vilification. I had done the story after two Malayalam channels had reported on the leakage and levelling the allegations that my husband had leaked to me does not stand as he is a lower level policeman... all the details were with senior police officers."

She said that her husband was transferred seven times in a row and even outside, which is generally not done in Kerala Police, but after she lodged a complaint with the state police chief, his transfer was canceled and he was brought to Kozhikode district which is adjacent to his home district of Kannur from Palakkad where he was transferred.

Supporting Vineetha, lawmaker K.K. Rema, whose husband T.P. Chandrashekharan was brutally murdered by CPI-M-linked criminals on May 4, 2012, told IANS that CPI-M is now thinking that electoral success is "letting them do anything".

"They must understand that torturing a woman and her family will not do them justice and they will be relegated to the dustbin of history. I do stand strongly with Vineetha Venu and her fight for justice."

CPI-M Kannur district Secretary M.V. Jayarajan was not available for comment despite repeated attempts to contact him.