CRPF Denies Breach In Priyanka Gandhi’s Security In Lucknow; Blames Her For Going On Scooty Without Informing 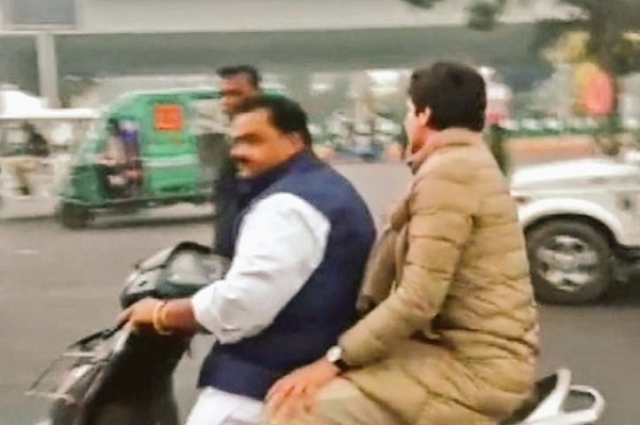 Priyanka Gandhi along with Dheeraj Gurjar (Pic via Twitter)

The Central Reserve Police Force (CRPF) on Monday (30 December) denied any security breach in Congress General Secretary Priyanka Gandhi Vadra's recent trip to Lucknow when she went to meet families of those detained in anti-CAA protests.

The CRPF, in a statement, blamed Gandhi for the "violations" by travelling as a pillion rider on a scooty and letting a man climb on to a stage at her event here.

The paramilitary force, which provides her armed commandos under the 'Z plus' category, said the Congress leader undertook "unscheduled" movement without intimation to the security personnel.

"Therefore, an advanced security liaison (ASL) could not be conducted," the CRPF statement said.

"During travelling, the protectee used non-bullet resistant civil vehicle without a personal security officer. The protectee took a lift in scooty as a pillion rider," the statement said and added, "Despite the security constraints, the CRPF provided appropriate security cover."

"Such security lapses have been communicated to the protectee and advised for ensuring proper security arrangements in future," it added.

Stopped from going to the residence of a jailed activist and former IPS officer S R Darapuri, the Congress leader moved ahead on foot and then rode on the scooty.

She alleged that threats were issued to her security personnel by local police and that she was warned to restrict her movements.

Gandhi is now protected by the CRPF after the Special Protection Group (SPG) security cover was withdrawn from the Gandhi family in November.

In another security breach incident, which also happened on Saturday in Lucknow, a man climbed onto the stage where she was sitting along with senior party leaders during a programme held to mark the 135th Foundation Day of the Congress. As soon as the man climbed onto the stage, security personnel swung into action and tried to stop him from meeting the Congress leader. However, Gandhi gestured them to step back and allowed the man to meet her and heard his ordeal, following which he shook hands with other leaders on the stage.

The CRPF also said that there was no security breach by the Circle Officer concerned in Lucknow as the detailed programme of the Congress General Secretary was not communicated to him.

It said that the tour programme of the Congress leader to visit Lucknow on 27 and 28 December was received and communicated to the state authorities. The CRPF said it alerted the Lucknow police in advance about Priyanka's visit to Lucknow as part of advance security liaison procedure, provided by the force when Gandhi family visits out of Delhi to attend any programme.

"On 28 December, 2019 the only programme indicated was to visit Pradesh Congress Committee office for attending Congress foundation function for which ASL had been conducted. Abhay Mishra, the Circle Officer, Hazratganj at around 8am visited the place of stay to enquire about the detailed programme of the day of the protectee which was not communicated by the personal staff," said the CRPF statement.