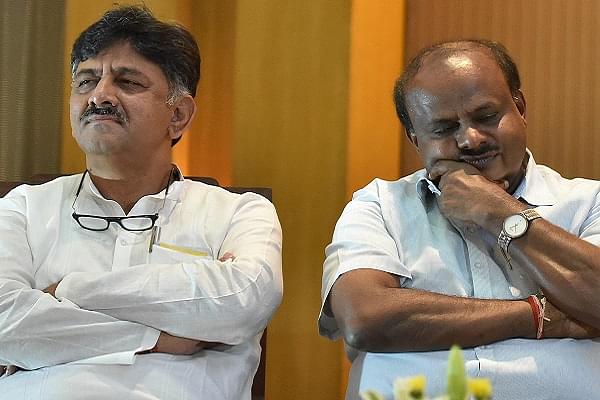 In a dramatic turn to the ongoing political crisis in Karnataka that has almost led to the collapse of the Congress- JD(S) coalition, Congress party’s key troubleshooter and senior party leader, D K Shivakumar, ostensibly in a bid to buy peace, flew down to Mumbai, and attempted to storm an upscale hotel in Powai which is hosting the rebel MLAs.

Anticipating Shivakumar’s visit (the plan was widely reported in the local media), 10 dissident MLAs, staying at the Renaissance hotel in Powai, wrote to the Mumbai Police Commissioner stating that they "feel threatened as they have heard that H D Kumaraswamy and D K Shivakumar are going to storm the hotel".

Shivakumar, accompanied by JD(S) MLA Shivalinge Gowda, arrived at the Mumbai airport early morning and headed directly to the Renaissance Hotel in Powai.

"My brothers are here, I wanted to meet them, we were in government together, there were some issues, we want to negotiate and sort out the issue," the Congress strongman claimed.

Mumbai Police however escorted Shivakumar away from the gates of Renaissance - Hotel as the 10 rebel Congress-JD(S) lawmakers refused to meet him.

Rebel Congress MLA Ramesh Jarkiholi rebuffed Shivakumar’s overtures, “D K Shivakumar is lying. He is doing drama. We had informed him earlier that we don't want to meet him. We have only resigned from our posts and not from Congress. What does he mean that he is our friend? This has been going on for over a year, where was he then?” he said.

The rebel Congress-JD(S) MLAs are reportedly planning to move the Supreme Court against the Karnataka Assembly Speaker today (10 July). They are alleging that Speaker Ramesh Kumar is deliberately delaying acceptance of their resignations.

Another senior Congress leader and Shivajinagar MLA Roshan Baig also submitted his resignation letter to the Speaker KR Ramesh. Number of MLAs who have resigned so far is 15.

With this latest development, the Karnataka assembly strength has come down from 224 to 209. The coalition government has been effectively reduced to a minority in the assembly as Congress-JDS strength now is 103, while BJP has 105 and the support of two Independent MLAs.

In a desperate last ditch attempt to save the government, all Cabinet ministers have resigned to get the disgruntled MLAs back in the camp.

The role of state assembly speaker K R Ramesh Kumar has also come under scrutiny.
The Speaker yesterday rejected their resignations of eight legislators claiming that they were not in the prescribed format.

The Speaker’s office has informed these MLAs - ST Somashekhar, H Vishwanath, Muniratna, B A Basavaraj, B C Patil, Ramesh Jarkiholi, Shivaram Hebbar and Mahesh Kumatha, about speaker’s decision in this regard.

According to the speaker, the resignation of five other rebels are in order and the Speaker is examining them.