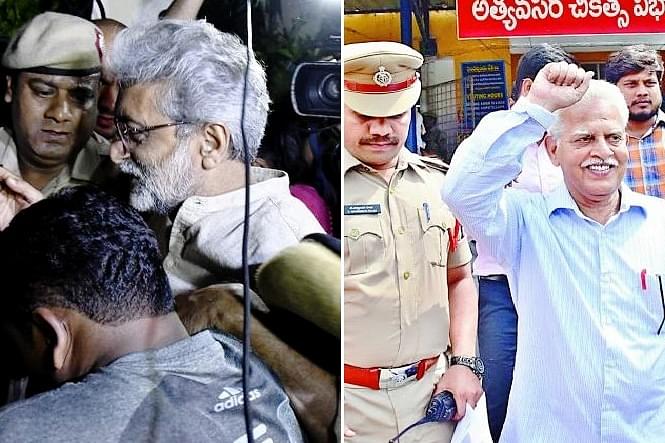 Two of the five left-wing activists arrested by Maharashtra police from different parts of the country following nation-wide raids late in Tuesday.

The Supreme Court has ordered that the five Left wing activists arrested by Maharashtra Police be kept under house arrest till 6 September. Zee news reported, “The order was given by a three-judge bench of Chief Justice Dipak Misra and Justices A M Khanwilkar and D Y Chandrachud on the petition filed against the arrest of five activists”.

“All five activists - Sudha Bharadwaj, Gautam Navlakha, Arun Ferreira, Vernon Gonsalves and P Varavara Rao - picked up in connection with Bhima Koregaon violence to remain in house arrest in their own homes till next date of hearing, orders Supreme Court,” reported the Indian Express.

According to News 18,  the Delhi High court has said that it would examine the “legality of the Maharashtra police action”. The News 18 report adds, “The court also slammed police for failing to produce the translated version of the FIR and said it was yet to hear the grounds of arrest. Varavara Rao, Arun Fereira and Vernon Gonsalves, on the other hand, were produced by Pune police at the sessions court there”.

Indian Express reported, “Historian Romila Thapar and others on Wednesday moved the Supreme Court against the arrests of five activists who were picked up Tuesday by the Maharashtra Police from different locations for their alleged Maoists links...”

Earlier today, terming the police action against the activists  “unethical crackdown”. CPI(M) general secretary Sitaram Yechury announced that the Left parties will hold a Jantar Mantar protest in Delhi against the arrest of the five activists, reported the Financial Express. The five activists -- Varavara Rao, Arun Farreira,Vernon Gonzalves, Sudha Bhardwaj and Gautam Navalakha, were arrested by Maharashtra Police in connection with the Bhima-Koregaon violence case.

“There will be a protest at Jantar Mantar in Delhi tomorrow by the Left and all progressive groups against the unethical crackdown,” Yechury had told ANI.

The next hearing of the case is on 6 September.