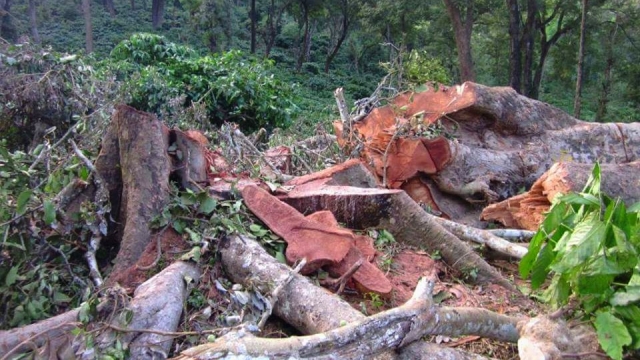 According to Meena, the supply line was not supposed to pass through Santhivanam in the initial plan but later changed as owners of adjacent lands did not want the power lines going through their properties. (image via Twitter)

The Kerala State Electricity Board (KSEB) is set to resume working on laying its 110 KV electricity supply line through Santhivanam, 200-year-old mini forest home to an array of flora and fauna and sacred groves, reports the NewsMinute.

The forest is located in Ernakulam region of Kochi and owned by Meena Menon, who has signified the need to preserve Santhivanam and along with various environmentalists and supporters continue to protest at the site.

According to Meena, the supply line was not supposed to pass through Santhivanam in the initial plan but later changed as owners of adjacent lands did not want the power lines going through their properties.

Kerala Power Minister, MM Mani denied her claim and said that there had been no changes in the plan since the beginning. The power line is part of the Mannam-Cherai distribution line project of KSEB which will address the power shortage in the region and also supply electricity to the fishing community of Vypeen region.

The fight for the forest which has gone from local to the state has seen the Chief Minister Pinarayi Vijayan commenting on Tuesday (7 May), saying “We stand for protecting the environment, but this project will resume.”

District Collector M Mohammed Y Safirulla also supported the project. “Some changes in the measurement of the tower has been mooted by KSEB.” Only three trees would have to be chopped down instead of 48 trees as per earlier estimations.