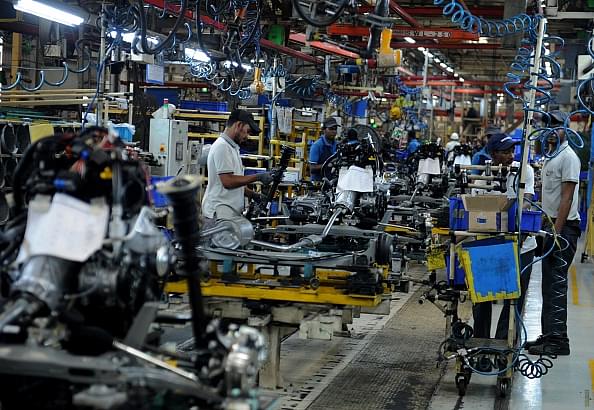 Factory workers at the assembly lines of components for Datsun Go and Renault Kwid vehicles at Renault Nissan Automotive India factory in Chennai.

While the overall growth rates of the eight core industries remained the same as last year, 2018-19 witnessed moderated industrial growth vis-a-vis 2017-18 due subdued growth in Q3 and Q4.

The Index of Industrial Production (IIP) stood at 3.6 per cent in 2018-19 as compared to 4.4 per cent recorded last year. The core eight growth rate remained steady at 4.3 per cent, same as last year. The reduced growth rate is attributed to lower credit flow to medium and small industries, reduced lending by NBFCs owing to liquidity crunch and the tapering of domestic demand for key sectors.

The country has taken strides in infrastructure development too, with road construction leapfrogging from 12 km per day in 2014-15 to 30 km per day in 2018-19. The survey also points to the India’s improved raking in the World Bank’s Ease of Doing Business Report, with the nation improving its rank to 77th from 100th earlier.

Following the trend, the Services sector growth rate at 7.5 per cent too saw a moderation as compared to the last year’s rate of 8.1 per cent. While the sector accounts for 54 per cent of India’s Gross Value Addition (GVA), the survey noted its muted contribution to jobs, in contrast with foreign economies. The sector share in employment stood at 34 per cent in 2017.

The sector saw a deceleration in the growth of sub sectors such as trade, hotels, transport, communication and broadcasting services while growth of financial services, real estate and professional services accelerated.

The survey has taken note of the demographic advantage that India enjoys and has laid emphasis on inclusive growth. The survey notes India’s achievements towards meeting the 17 Sustainable Development Goals (SDGs) set by the United Nations despite the underlying resource constraints of the developing nation.

The 2017 HDI scores indicate that the states like Kerala, Goa, Himachal Pradesh and Punjab occupy the top four positions while the States like Bihar, Uttar Pradesh and Madhya Pradesh are at the bottom of the rankings.