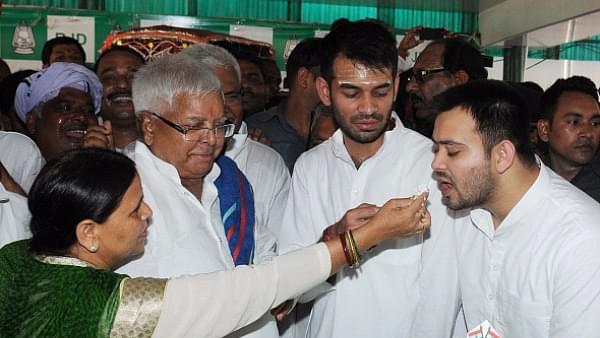 A political storm has erupted ahead of the Bihar elections after an FIR was registered in the Khajanchi Haat police station in Purnia against Rashtriya Janata Dal (RJD) leader Tejaswi Yadav and his brother Tej Pratap Yadav. The duo has been named in an alleged case of murder of Shakti Mallik, a Dalit leader and former state unit secretary of the RJDs SC/ST cell.

A police official said on Monday that Mallik was shot dead by some unidentified assailants at his residence in Purnia on Sunday (4 October).

Based on the written statement of the deceased’s wife Khushboo Devi, an FIR was lodged at the Khajanchi Haat police station which allegedly names RJD leader and Leader of Opposition in the Bihar Legislative Assembly Tejashwi Yadav and his brother and former health minister Tej Pratap Yadav. The other accused named in the FIR include Kalo Paswan, Anil Kumar Sadhu, Suniti Devi and Manoj Paswan.

A video of the deceased Dalit leader shot a month ago has gone viral on the social media in which he speaks about the possibility of getting killed. The video says that if Mallik is killed, Tejashwi Yadav and Anil Sadhu should be held responsible for his death.

Purnia Superintendent of Police (SP) Vishal Sharma said an FIR has been lodged in the Khajanchi Haat police station and the police are investigating the case.

“Prima facie it appears to be a case of murder. The family members of the deceased have alleged that Mallik was preparing to contest the Bihar elections which is perhaps the reason behind his murder,” the Purnia SP added.

JD-U Spokesperson Rajeev Ranjan said that after Tejashwi Yadav figured in the murder case, his real face has been exposed. However, he added, it was the job of the police to investigate the matter and unearth the truth.

BJP’s Ajit Chaudhary said when the RJD was ruling Bihar, the murder of Dalits and the underprivileged sections of society was commonplace. Even today the modus operandi of the RJD has not changed, he added.

However, the RJD has refuted all allegations, calling it a “political conspiracy”.