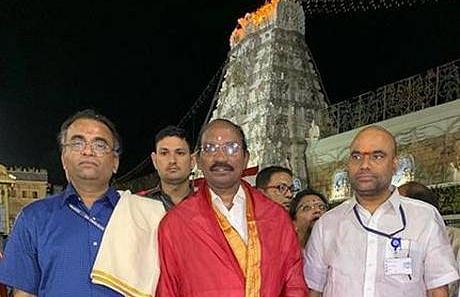 ISRO chairman K Sivan offered prayers to Lord Venkateshwara at Tirumala on Tuesday (21 May) ahead of the launch of PSLV C-46 satellite from Sriharikota in Nellore district, reports Hans India.

K Sivan also presented a miniature replica of the satellite, placed it at the Lord’s feet and performed a special puja. He said that RISAT 2B will be launched aboard the PSLV C-46. RISAT 2B is a radar imaging earth observation satellite used for reconnaissance purposes.

“PSLV-C46 is the 48th mission of PSLV and it will launch RISAT 2B from the first launch pad (FLP) of the Satish Dhawan space center,” he added.