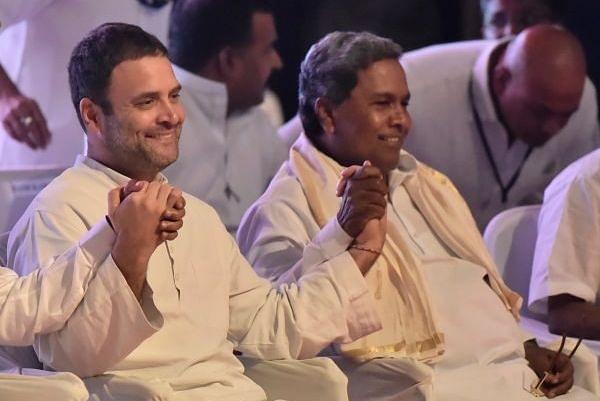 Former Karnataka chief minister (CM) Siddaramaiah waded into yet another controversy by his shockingly inappropriate public behaviour with a lady identified as Jamalar at a Congress party event at Varuna in Mysuru today (28 January).

Jamalar is a former District Panchayat member and the altercation happened during a party meeting held at Gargeshwari village falling under Varuna Assembly constituency represented by Yathindra, son of the former CM.

In a video that has gone viral on the social media, Siddaramaiah is seen getting furious as the woman accuses the local officials of not responding to grievances of the people. The woman then went on to point out that Siddaramaiah has come to the village after a long time and the sitting MLA, Yathindra is completely inaccessible to the common people.

In a fit of rage, the former CM, who is surrounded by his followers, is seen lunging towards the woman in an attempt to snatch the mic she was holding. In the ensuing fracas, the dupatta also came off with the mic.

The shocking visuals of a former CM’s obnoxious behaviour at the public event received all-round condemnation.

The state unit of Karnataka BJP termed Siddaramaiah as "Kaurava government's modern Dushyasana", which is a reference to epic Mahabharata where Dushyasana, Duryodhana's brother, tried to disrobe Draupadi in front of the king's general assembly.

CM @hd_kumaraswamy asks a farmer women were she slept

BJP Mysuru district (rural) president M Shivanna said that it was unbecoming of a former chief minister to behave in such a manner. He added that the leaders should listen patiently to the grievances of the people and try to solve their problems.

Meanwhile, the National Commission for Women has also taken cognisance of the event, with its Chairperson Rekha Sharma saying that the commission will write to the Karnataka police and seek appropriate action into the matter.