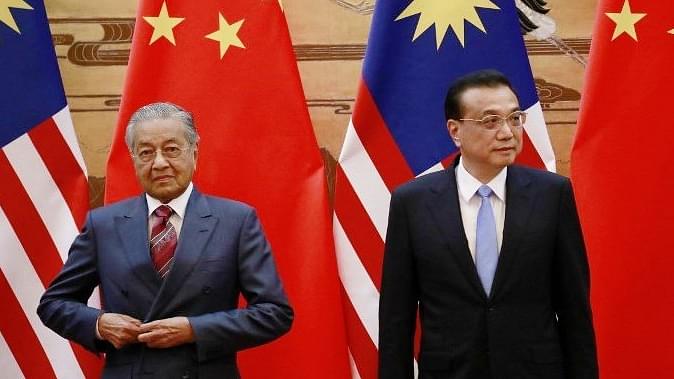 Malaysian Prime Minister Mahathir Mohamad who is on a 5 day visit to China has been making headlines for his strong rebuttal of the Chinese led Belt and Road Initiative (BRI).

ANI reports that the Malaysian PM has cancelled a key BRI project, the East Coast Rail Link as well as two gas pipeline projects in a further setback to Chinese interests in the region. Expressing his concerns bluntly, the Malaysian premier in a press conference said “I believe China itself does not want to see Malaysia a bankrupt country.”

In an earlier press conference with his Chinese counterpart, the Malaysian premier while equating free trade with fair trade also issued a stark warning to China against initiating a new form of “colonialism”.

“"The projects will not go on. At the moment, the priority is reducing our debt . it will be deferred until such time when we can afford, then maybe we will reduce the cost...If we have to pay compensation, we have to pay. This is the stupidity of the negotiations before. We must find a way to exit these projects,” Mahatir is quoted to have said in the report.

“You don’t want a situation where there’s a new version of colonialism happening because poor countries are unable to compete with rich countries in terms of just open, free trade,” he added.

It is apparent that the Malaysian premier is not a fan of the Chinese led development projects in the region which has worried many as it is believed that countries hosting these projects would be bound in a relationship of indebtedness with China.

The Malaysian pushback comes close on the heels of the Myanmar rebuff which drastically scaled down a critical deep-sea water project and calls into question the future of the BRI which is a signature policy measure initiated by the present Chinese regime to shore up its economy and global reach.