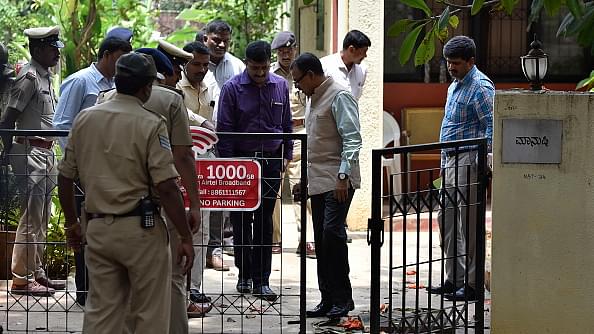 Officials of the Special Investigation Team (SIT) probing the murder of journalist Gauri Lankesh, are questioning former Naxals Sirimane Nagaraj and Noor Zulfikar (also known as Sridhar) as part of the investigation, reported Star of Mysore.

The former Naxals are under interrogation currently in an undisclosed location, said the report.

Nagaraj and Sridhar are among the Naxals who were persuaded by Lankesh to give up the violent path and assimilate into the mainstream.

Also being questioned is Lankesh’s brother, Indrajit Lankesh, whose response in the earlier round of questioning was found unsatisfactory by the authorities.

The SIT is also reportedly set to grill rowdy sheeter Kunigal Giri and six of his associates for their alleged role in the case. A CCTV camera is said to have captured the movements of Giri’s associates around Lankesh’s house.

As the probe gathers momentum, two Scotland Yard officials have been called in to assist the investigating team to help crack the case.

The Crime Investigation Department will also be sharing the details of its probe into the killing of rationalist M M Kalburgi with the SIT, a top official said yesterday (15 September).

Lankesh was shot dead at her residence in Bengaluru's Rajarajeshwari Nagar on Tuesday night (5 September).

Who Killed Lankesh? We Did, By Opting For Politics Of Private Freebies Instead Of Public Goods Like Law And Order

Gauri Lankesh Murder: No One Safe Under Siddaramaiah’s Rule